I guess Yo! MTV Raps is a weird way to get into hard rock and heavy metal, but that’s how it worked for me. In junior high I dutifully recorded every episode of Yo! MTV Raps to learn to dance and be cool. Guess what? It didn’t work! But the first time I heard Faith No More was on that program with their metal / rap blended song “Epic”. I bought the CD and was hooked. When Angel Dust came out, it was the soundtrack for my freshman year of high school as I grew my hair out while the other brats listened to shit like Pearl Jam and Spin Doctors. Imagine my pleasure when Secret Serpents threw me a bone and accepted my begging to be part of the current Faith No More tour poster series.

The poster series for Faith No More‘s current tour is entirely published by Secret Serpents. That meant, for once, I was on the clock while printing my own artwork. It also means the posters all belong to Secret Serpents and they just went on sale this week exclusively through their website, www.secretserpents.com. I hope it sells well for them, of course, as I busted my ass to get this thing done on time!

May was a busy month for me. I ended up with a few poster gigs all while prepping to go out for three weeks on tour and working overtime every day. As a no name in the art field, I had to really think hard on a poster that I thought would sell well for a publisher and also meet the band’s criteria. There was to be no scantily clad women, no realistic depictions of skulls, and no caricatures of the band. Well, what about that gimp that Faith No More has been trotting out on stage occasionally?

I had a lot of stupid ideas for what to do. A lot. Some of them were shot down by Justin at Secret Serpents, and rightfully so. It was finally my co-worker and old buddy Brian Stormcrow (of Stormcrow fame) who gave me the idea for this poster over a smoke. “Why not just have the gimp head on the Dawn of the Dead poster?” So simple, so elegant, and so so nostalgia remix culture.

I drew it up with just days to spare. All the posters were supposed to be four solid colors, per orders, but I got Secret Serpents to agree to paying for a split-fountain print as I would only be doing a three color print. That sky needed a bad ass split fountain.

I went into work early on Wednesday and finished the job, with the difficult split fountain, in record time. Why the rush? Well, the minute I finished, I had to leave work and join the rest of my band on tour! We left that afternoon to our first show in Denver. Talk about cutting it close.

The series also had to have a variant and Monolith Press had just enough foil sheets left for me to print some… as long as I didn’t fuck any up. I didn’t. These are in a series of 20, and obviously sell for more from Secret Serpents. I guess it’s a way to ensure that they don’t lose their shirts publishing art from some unknown turkey like me. 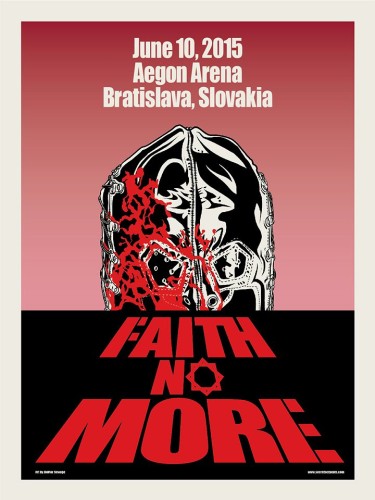 All told, I printed about 300 of these puppies for a numbered series of 115, 20 variants, and 80 for the actual show. We always run a lot of extras when doing a split-fountain. Any printer would know that amount SUUUUUUUCKS!! To try and get the split colors to maintain over such a long run is nothing short of daunting. Apparently, I like to torture myself. But hopefully it was worth it and people of good taste will run to their computers, visit www.secretserpents.com, and pick up a copy of my poster for an amazing band.