It’s all becoming a hazy blur… I really bungled my self-appointed position as blogger extraordinaire this last tour. I didn’t write down shit. Was there lots of downtime? Yes. Was I tired a lot? Yes. Did I figure out how Hulu works on my phone so I could watch a bunch of Venture Brothers? Oh yes. Looking at this tour pass, I realize my folly to try and remember it all later.

But attempt to remember it, I shall. How I wish I had recorded my touringest years of 2008-2010, even just a little bit. So here goes… I had gone into work early to finish my Faith No More poster. I churned it out in record time, because Sean had been a tad upset in a text exchange the night before when I reminded him I had work on the day we were to leave tour. Still, I got done fast and showed up at the allotted hour to load the trailer and… those mooks were still painting costumes. It would be four or so more hours until we finally left Oakland. And those fucking costumes still weren’t finished.

And about four hours driving was all we could get until we pulled into a rest stop somewhere near Bear River in California. We were first asked by some transients about scoring crystal meth, then we got advice for a campsite from some old timer that seemed to be baiting us for a serial kill. But his directions were correct and we found a campsite. This was supposed to happen somewhere in Nevada.

Along the way, Scott continued working on costumes while we discussed what the hell the story of the show was going to actually be. We also put together the traditional prop-give-away, this time a ‘zine called Crust Fund. Literally days went into working on this dumb thing no one would ever read.

After driving for a few days, we finally met up with Phobia and Nekrofilth at Mo’s BBQ for our first show. Not the most auspicious place to begin a tour, but began it we did. During Nekrofilth and Phobia’s set, I was busy in the van recording samples for our live show that I was writing basically as we recorded them. I really didn’t hold out much hope for the first show to work out. But… it wasn’t a disaster. The samples all worked, the show happened, and we had the first one under our belt.

We were late getting into Des Moines, so I unfortunately missed the pedigreed openers Traffic Death, featuring members of Black Market Fetus. Vaudeville Mews is in that part of town every town has, where fratty looking dudes doused in Drakkar Noir all fight to bang the chicks in the shortest skirts, you know, before they all grow up and have lives they hate. It’s also the best show space in town.

At the end of the night, the sound guy handed us a bag of gear we thought musta belonged to Nekrofilth or Phobia. It didn’t. Days later I opened it and discovered a bunch of expensive pedals and a wireless system! Score! Days after that, I found the band’s picks who had played a matinee show before ours. I really scrutinized their Facebook to see if there was any reason to hate them, like misogynistic or homophobic comments, so I could keep the stuff. Well, turns out, they’re decent folks. I contacted them after tour and returned the bag. Dammit… doing the right thing really feels like losing, sometimes.

I was really excited about Chicago the next day. I was less excited when I heard there was like four other metal shows going on, one of them sharing our promoter. We did have a great show, but I can only imagine it could’ve been greaterer without Anaal Nathrakh playing across town. Because I am an ingrate. That night, we stayed in the back stage room at Reggie’s, which felt like a very European tour thing to do. But dirtier. We had to get fans going to clear out the band funk. It was a little gross, but I’m so dehumanized on tour, I didn’t care. Some others had reached their breaking point on this decision and the consequence was we got a lot more hotels after this.

Cleveland was a Monday night show at a 21 and up dive called Now That’s Class. I didn’t expect much, but we had a really great time there. It was far from packed, but the owner, Paul, seemed quite pleased by the turnout for a Monday. Pittsburgh was similar, with a club that none of my friends in town had ever really heard of called Cattivo, apparently, more well known as a lesbian bar. We expected a shit-show and instead got a the-shit-show, at least considering the oddly booked venue. It was also the only place the night ended with an angry sound guy. I don’t really blame him, having to clean fake blood off his cables, but all this info is in our rider that apparently no one ever forwards to the club.

Next up was Brooklyn at one of our favorite show spots, Saint Vitus Bar. This place is so rad and the staff is awesome. There’s also just too many cool people and friends in that area that it gets a bit overwhelming. I ended up spending most of the time in the van doing what I thought would be a short interview, but ended up being well over an hour. Though feeling a bit rushed, I think the night turned out killer, which you can judge for yourself, thanks to the dedicated video work of http://pitfullofshit.blogspot.com/ and Frank Huang.

We ended up in Philly next for a very exciting show that included D.R.I. The club was sold out, I’m sure SOLELY because of us (insert sarcasm here). The Voltage Lounge was a weird spot, though, with a tiny little stage and then a fucking ENORMOUS side stage that was curtained off. It was a little difficult for us, but for once, it was easier on our costumed crew. The fatality that night was my cabinet. D.R.I. doesn’t travel with gear, you see, so they borrowed some of ours. This happened before and bassist Harold O. left my bass amp feeling like a hot frying pan after a 2+ hour set. So, brilliantly, I asked Callum from Phobia if D.R.I. could borrow his Tech 21 bass head, which was promptly turned on 10 and blew right past the wattage on my speakers. I had to order the speaker from Guitar Center, which turned into quite the hassle as it Memorial Day Weekend. FML.

Luckily, Maryland Death Fest was next, so at least I knew I had a back line to work with. Baltimore has always been kind to us, and this weekend would be no exception. The staff we worked with at Baltimore Soundstage was beyond awesome, even adjusting the light over the merch when the red hue turned our super cool 3-D posters into 2-D. For the night, we also kidnapped Phobia’s sound guy, Alejandro Corredor. We’d been paying him to do our sound as well, but Phobia wasn’t playing MDF. Such is the awesomeness of Alejandro’s work that we had to steal him. We pounded out a killer set at MDF with all the madness inherent in an event where a chicken-suited mosher is a celebrity.

I was but an attendee the next day, hanging with my wife who flew out. We enjoyed the tunes of bands such as Razor, Wolf Brigade, and even Sean doing double-duty as vocalist for Engorged. It had been waaay too long since I’ve been able to see Engorged. They were a definite highlight of a killer weekend. Most impressive moment: we ran after seeing Engorged to the big stage to see as much of Razor as possible. Kevin from Engorged and his wife were already there because they had a taxi waiting outside for when he finished playing. That’s heavy fucking metal.

Unfortunately, we had to leave MDF for what would be the lamest of all our shows. It wasn’t any one person’s fault it was lame, but rather a confluence of decisions that made my night at New Mountain in Asheville, NC a lamefest. The venue itself was tiny with no way to pull of our stage show. Then the uppity bartender said we were absolutely banned from doing any blood antics, anyway. Really, this show with this crowd and these bands should’ve been in some dude’s basement and it woulda been a lot more fun. I proceeded to get myself good and stinking drunk. According to Sean and Ben, I ranted incoherently while they sat back and watched me between songs. I don’t recall, but I later found photo evidence of me wearing eight baseball hats and playing in a werewolf mask over my regular mask.

The next day more than made up for any bullshit I was feeling when we landed at the Earl in Atlanta. As soon as we walked in to the pub/restaurant/venue, we were greeted with fresh made treats from the kitchen, including homemade nacho cheese and fresh pork cracklin’s. It stormed aplenty outside and moshed aplenty inside. We got to have Atlanta’s own Death of Kings open and they ripped it. The rest of the show was ripping to the end. The Earl rips. 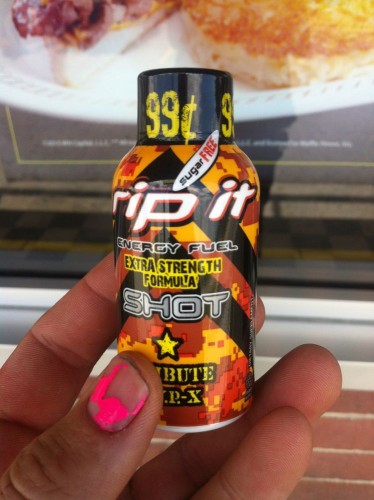 We ended the first half of our first nationally headlining tour at the Hi-Tone in Memphis, where smoking inside is still legal. Gross, even though I took full advantage of it. It was a fun show and I got to hang with at least one killer old pal, but the best stuff lay ahead.

Next up, Weapons of Mosh Destruction 3-D: Part 2: The Enndining!!

2 thoughts on “Weapons of Mosh Destruction 3-D: Part 1: The Beginining”