Continued from Weapons of Mosh Destruction 3-D: Part 1: The Beginining

We traveled from Memphis onto New Orleans. Siberia is an awesome punk club, but the way the stage is configured negated a bit of our show. That’s okay, this crusty-laden crowd is always friendly to us and the show was another rager. Once again, I think these fans were cleaner after we showered them with fake blood than when they came in.

A big fear we’d had during the first half of tour was the massive rainstorms coming into Texas. As we headed there, we were promised by the meteorologists that we would be getting the few dry days Texas had in weeks. What they didn’t mention was the horrible humidity that would be killing us as we loaded into Houston’s own Fitzgerald’s Theater. Are we California wimps? Surely. Does it suck to load in a full stage show up stairs in sweltering heat and 100% humidity? Surely.

The staff was on point as we entered, having already bagged up the monitors for the blood spilling to ensue. Dave from P.L.F. opened with his other band, Oath of Cruelty, and they brought a pounding. Some young lad backstage asked if I did coke. I told him I did not. He was disappointed, as he said he wanted to do some coke with a member of our band. What? Is this the new puff puff pass? Snort snort send?

At the end of the show, someone told me they’d seen a guy with one of our props walking around. I ran outside, then ran back in and found the guy holding it. I grabbed it and got real shitty in the guy’s face about stealing our shit. He insisted someone handed it to him. That might be true and I felt a little bad. I looked for him again to give him a shirt or something, but the lad was gone. Still… don’t steal our shit if you like us! You’re just ruining the show for someone else! It’s not like we have a truck full of dead baby props.

Austin is always a mixed bag of cool shows and the douchiest of douchey downtowns. We were lucky to arrive on their first day without rain in weeks. A good bit of luck for us, as we were playing the Red 7 outside stage. The narrative of our show was about gentrification and clubs closing down, and never did it fit more as the venerable Red 7 is probably losing its lease. Ouch, too soon?

Next we headed to San Antonio to play Korova, a Stanley Kubrick themed bar. But they didn’t serve milk. Go figure. Cece from Phobia was doing double duty this night, opening with her other band, So Unloved. She had told our own Scott that her bandmate loved Spider-Man, so Scott put all his prop making skills to the test to give her a welcome she wouldn’t forget. Shit, it was like Andrew Garfield was in the room with us!

But where was Spider-Man when we needed him? San Antonio was easily the most violent show of the tour. While I had the highlight of high-fiving a young child from the stage, at least two other fights broke out during the set. One of them involved a knife. Afterwards, I personally witnessed a metal mom demanding an apology from the lad who’d punched her 16-year-old daughter in the pit. Instead, the lad mouthed off, the mom punched him, he punched her, then about eight guys punched him repeatedly on the ground while the 16-year-old kicked him in the head. No one was permanently injured, but I got the feeling that San Antonio is not to be fucked with.

We backtracked towards Dallas to play Three Links, a tiny bar right across the street from the nicely sized club we played last September. Sadly, Nekrofilth would be leaving the tour at this show. So when they played, our crew made sure to dress up and douse ’em in some spew.

There was talk of an extra-special need to tone down our own act, what with the bar butted up right against the stage. Somehow, thought, we managed to perform the whole show. It’s just that our spew pumps were kinda semi-hard and needed to be thumbed in, so to speak. My favorite part was that Three Links keeps a giant roll-up door open, so essentially, anyone on the sidewalk can just watch the bands for free. In the middle of a song, I walked out to the sidewalk while playing and just asked the passer-bys how they were doing and if they wanted to pay to get in. I shoulda just put down a hat and started busking right there and then.

Again, this night, a fella says to me, “Did you give away your dead baby prop?” I immediately ran out the door and took off after a dude carrying it. I nabbed it from his hands, and he just goes, “ah, man.” He knew. He fucking KNEW he shouldn’t have taken it. Asshole. Texas, don’t mess with US.

After taking a day off to skip through west Texas and right through New Mexico, we finally got to Mesa, AZ. It was running a 106° fever. I know people say shit like, “it’s a dry heat,” and it was and yes, it was way better than muggy as Houston. It was also a perfect time to lay out all our disgusting stage gear and dry it out. The trick GWAR taught us that they learned from some circus folk is to spray it down with cheap vodka. It really does the trick better than Febreze to actually pull some of the smell out, as opposed to just covering it up. I was feeling pretty proud at this point to have not washed my costume once, yet. Take that, Dead from Mayhem.

We had a grand ol’ show at the Club Red in Mesa then moved on to Til Two in San Diego, CA. FINALLY, we were going back to Cali. We met up with Dr. Know at this show at a most inappropriate venue. The stage was set back in the bar and it couldn’t fit the sold-out crowd at all. It was kinda scary watching the surging crowd on stage, so I threw out water bottles one after the other to try and help members of the crowd from passing out. 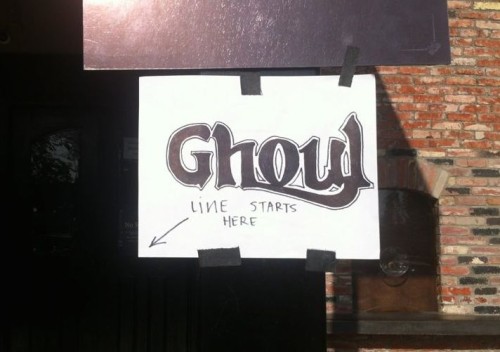 Thanks to a show cancellation in Ventura because some dumb club forgot to renew their cabaret license, we had a day off in the Los Angeles area. Refreshed and renewed, we headed to Santa Ana to once again decimate the Constellation Room. This place is great, with an excellent show space and a killer staff. In the connected club, the Observatory, Alkaline Trio was playing. Man, so many people came to see them, and they SUCKED. Our show was god damned insane, however, and packed to the gills. I was heartened to find out the next day several Alkaline Trio fans popped into our show and were delighted to experience some metal. There’s hope for them yet.

In Los Angeles, we showed up to Los Globos to see a line of punks down the block. We were like, “Fuck yeah!” until we realized they weren’t there to see us. See, Los Globos runs several shows all day. Downstairs from our show was an anarcho-folk-punk show, which these days I guess translates as “dirty white kids trying to look like old-timey hobos.” Being the open minded guy I am, I went down to their show, parted my way through the visible stink lines of the crowd, and watched Ramshackle Glory. I can say, quite unequivocally, that they were one of the worst bands I have ever seen, ever. Maudlin, out of tune guitar melodies punctuated with out of key sing-talking. Awful. Just awful.

As for our show… it was dangerous and sounded horrible. Tinny PA speakers meant for banda music tried to amplify L.A. hard-hitters Gravehill. I didn’t hold up much hope for our set, but the crowd surged back and forth violently as staff grabbed folks from the front who were in danger of being crushed. As soon as we were done, the staff promptly started setting up DJ gear in front of our cabs and forced us to load out around them as their disco event was set to start promptly 15 minutes after we were done. We hauled our shit down three flights of stairs incredulously. Fuck. This. Place.

Against my wishes, our crew decided to drive all night back to San Francisco. So I drank as much beer as I could while loading the trailer, making myself ineligible to drive. Smart! We arrived home before the sun came up. Sean and Ben dutifully dropped everyone off at home and then, 10 minutes from their own beds… the drive shaft on the van fell out. Poor Ben and Sean had to deal with getting the van and trailer towed before they could catch any winks to rest up for our final show at the D.N.A. Lounge in San Francisco. A disaster, to be sure, but what luck on the timing. We’ve yet to miss a show despite the best efforts our van to be a complete lemon.

Our homecoming show was a blast. Our punk friends in Lower Class Brats were out on tour with the Potato Pirates and the Zero Boys so we just put the shows together. It was great as the crowd mixed and rocked out to punk rock along with the grind of Phobia and our own splatterthrash. Sometimes it seems like only in the Bay Area can you get a more diverse bill like this to actually work. We all had a blast, and best of all, we were home!!

Except my key broke off in my car, and I had to catch a ride home in the back of a pick-up. Tour fun never ends.

One thought on “Weapons of Mosh Destruction 3-D: Part 2: The Enndining”