I guess I hadn’t totally blown it guest bass-playing for five days with Exhumed, because Matt Harvey shot me an email asking if I’d like to play with them at some little fest in Mexico. I said, sure, because I’m a dummy and didn’t even think about how busy I’d be around then, moving, working, playing shows, and prepping for tour. Me am smart. So of course, I put off the newer Exhumed songs I needed to learn to play a full set. As I meandered threw them in the days before, I finally saw the little fest we were playing wasn’t so little. Judas Priest headlining? Holy fuck…

To be honest, I’d avoided hearing too much of later Exhumed records because I’m a bitter little bitch. Now I had to learn vocals and bass licks I had just the barest familiarity with. I was surprised at how complicated Exhumed riffs had gotten. I ditched any notion of trying to learn this shit finger-strumming in the short time I had and went straight to the pick. I was also surprised how much I liked it way more than the material immediately following my original firing. Exhumed 2.0 is one bad-assed death metal band.

There was a slight screw up of flight plans, though who can blame the promoters. Exhumed was coming not only from different locals in California, but different locales around the world. So, instead of taking a train to meet up with Matt and drummer Mike Hamilton to practice, I had to drive an eight hour round trip late through the night and fly out from Oakland early in the morning. Having been consistently working 10-12 hour days, prepping for tour, learning songs late into the night, I was less than stoked. But those eight hours were an absolute pleasure. I was finally cut off from the rest of the world for a few hours and just enjoying some tunes on the radio.

Practice went well enough. It was another bit of an odd flashback to my youth as Matt and I instantly indulged in comic book nerd talk, feverishly agreeing about inappropriate superhero characterizations in modern cinema. Mike resisted the urge to give us swirlies.

At practice, Matt told me about more flight screw-ups. Exhumed hadn’t had the rest of the tickets bought until the last minute. They had to drive up from San Luis Obispo three-and-a-half hours to catch the last flight available to Guadalajara from San Jose. It wouldn’t be the end of the shenanigans.

I caught my flight in the morning, connected in LAX, headed down to Guadalajara in Mexico. Everything went smooth. Customs was a snap, the fest had two gents ready to meet me, and I was hustled into a van by myself to be sent on my way. In retrospect, blindly trusting two gents in Mexico to put you in a van without asking for credentials was an incredibly stupid thing to do. Luckily, I was befriended by Jose the driver instead of beheaded by Jose the narco-gangster. 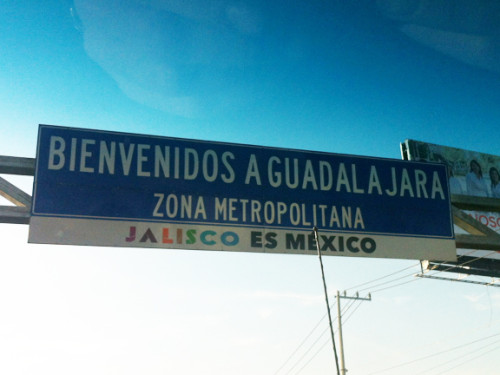 I was put up in a nice hotel room. My own, as everyone got an individual. Fucking rock star bullshit, hell yeah. It was about 7PM and I went scouting around the neighborhood for… anything. The hotel was nowhere near anything interesting. I just got some beers at a local 7-11, anticipating the rest of Exhumed’s arrival and the need for us to share some cold ones once we’d congregated. Hours and hours passed, and Exhumed never arrived at the hotel.

The wifi at the hotel had been down when I arrived. I drank beers, passed out, and woke up sometime after midnight. I checked my smart phone to see the wifi was working again and checked my mail. My inbox had an e-mail from Matt: “Subject: I’m in jail. This is not a joke.” Locked-up abroad.

I was clued into what was going on. Bud actually had arrived at the hotel after a long trip that included flights from Austria to Russia to New York to Monterey and finally Guadalajara. We didn’t know at the time we had individual rooms and were never told the other had arrived. Mike was at the fest sound-checking, having taking on double duty as drum-tech for Overkill. Dylan was at the airport, waiting for Matt, because the last Dylan or Mike had seen Matt, the authorities taking him away to “ask a few questions.”

Matt had flown in with a bullet belt. So he was being detained because apparently, even when it’s a replica or dead ammo, this is a big no-no. A very big one. They nabbed him in customs and rescinded him to the municipal jail. Basically, they just held him until someone was willing to pay to get him out. No trial, no follow up needed, just “fuck you, pay us.” If Matt was found guilty of anything, it was of being the same goofball head-in-the-clouds metal-head goon I’d known for years. The fest organizers quickly sent someone to take care of the situation and the authorities assured them he’d be out by 9AM. They just needed to tend to some paperwork and then we’d all have a good laugh about it.

The four un-incarcerated members of our troupe met in the morning. Matt was not yet released. The authorities now said Matt would be released at noon. Cool. Bud and I went over some of the songs and we headed out to the fest. Now we heard Matt was being released around 3PM. That was cutting it pretty close. When 3PM rolled around, we were told Matt was going to be released by 5PM… 10 minutes after we were supposed to be hitting our first notes on stage.

All of a sudden, the hilarity ended. Don’t worry, it picked up again later. But there was a good 20 minutes of calling bookers, trying to convince the promoters to move our set, and the final choice to make; would we really get on stage without Matt? This is the front-man, the founding member, the DUDE. I think Mike, Bud, and I went back and forth several times each, deciding first to say, “fuck this,” and then “fuck it.” For me, I felt the final decision needed the guidance of the band’s booking agent, a third party interested more in the particulars of the business than the artistic integrity of putting on a good performance. Shit, man, I’m not even in this group; I didn’t know how to weigh in. With the bookers advice, we finally decided to do it. To cancel would look bad; even worse than our performance might look.

Not gonna lie, I was nervous. Shit, this crowd was huge, and Mike and Bud are looking at me like “You know how to announce songs. You’re the front man.” I never even announced Exhumed songs when I was in Exhumed! The nerves lasted about 30 minutes, then the realization kicked in this was just another show. Train wreck a show? Shit, I’ve had those. This could be another one, or maybe not. And it just didn’t matter, ‘cause we were determined to go out there and give it almost all of our all. Maybe close to 80%.

We cut a couple tunes with too many solos, Bud and I discussed who would cover Matt’s vocal parts in which songs, and we got on stage… and you know what? It wasn’t terrible. The first song, okay, that might’ve been terrible, and the rest certainly wasn’t great. But we squeaked through a decent set, mosh pits broke out, people cheered, and I talked some shit into a microphone. We made it through with a little help from Exhumed’s Dr. Philthy and their sound man Alejandro. So yeah… fuck you, Matt. Eat that shit.

Matt finally arrived at the fest a couple hours later, a free man. He got to see the merch stands selling, ironically enough, bullet belts. We gave him a hug, got the low down on his not-all-that-frightening experience, and started swilling beers like it had just been invented. It turned into a fun night. We watched some Grim Reaper and Carcass. We hung out with dudes from Wehrmacht and Death Angel. We drunkenly answered some questions at the press table. We enjoyed the warm Guadalajara night by setting up some chairs outdoors in the band area as the sweet tunes of Judas Priest carried through the air.

Of course, it was really fun to play with Exhumed again and hang with my old pal Matt. But this trip had its own uniqueness as I got to really work close with Bud and Mike. These are two guys I’ve known for a long, long time, but now I got to enjoy working with them under pressure and see what cool dudes they are under fire. I shared a ton of laughs with them through the experience. I was happy to better know Dylan, Exhumed’s doctor/roadie extraordinaire, and share a bunch of laughs with him, too. And I felt like I did pretty damn alright. I stepped up to the plate with the bases loaded at the bottom of the ninth… and I got walked. Meh, it gets the job done. Good enough.

Damien Scott@MadScientistFF
Pepperoni isn't available, What are you adding to this? https://t.co/UtveskOxmW
0
11
future juggalo rob zombie bride · 1 hour ago
@sewage666
alt idea for netflix to increase subscribers: a library of content that doesn’t blow https://t.co/NrISVpCHq5
View on Twitter
Kendall Baker@kendallbaker
Netflix's new password-sharing rule: Every 31 days your device must log in on your home network — or it will be blocked.