A number of months ago, a number I cannot seem to figure out, I was given a CD by this guy I knew who used to work in a comic shop I had spent some time in. He wanted me to check it out and possibly drop the name around, I guess like one of those hip people Sony or MTV pays to mention their shit at the hottest clubs. Only, I’m not hot and I don’t hang out in clubs per se… usually it’s filthy bars.

The name of the band was Goblin Cock. The cover was hilarious, the name was ribald, the layout was terrible. I wrongly assumed this was some wretched band with too much money from their mommies for some art with crap production and terrible songs that should’ve stayed putting out CDR demos. I was pretty much wrong, but here… judge the cover for yourself.

So, fast forward, I’m picking through CDs, getting rid of some junk. I come across this CD, and I’m like, fine, okay, I’ll fucking listen to it. Turns out… I like it. It’s kind of Melvins-y, with a hint of early High on Fire and some really nice indie-style vocals. The songs bring up images of wizards and dragons but from a definitively ironic standpoint, something I was wary of. I still can’t deny, this has a groovin’ stoner feel with some excellent 6/8 beats and nice production. I’m into it.

Then I find the video for this band. They fight a giant cardboard robot, go to a comic store, emerge from the ocean… all in black cloaks. I’m still trying to decide if this funny or that kind of overt wackiness I despise. For example… there was a band around here that did Iron Maiden covers with a giant carrot on stage. I just didn’t get it and didn’t think it was amusing or funny and was painfully self-aware. When another fake glam metal band had Gallagher come out on stage to smash a glass that the singer was trying to crack with his voice, however, I thought that was hilarious. Hey… you say tomato, I say potato. Gallagher says watermelon. 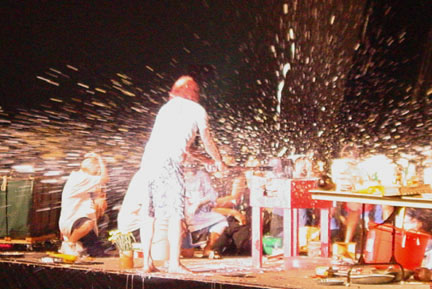 Goblin Cock came to play last night, and I decided to go. I brought my trusty cynical Jew, Brandi, to back me up. I was afraid this was going to be some kind of irony laden white belt spectacle. How prescient that thought was.

The show was at this place called the Mezzanine. The people outside were talking about how they’d seen Slayer at Ozzfest and how some kids had ruined their time by smoking crank. I said that’s what they got for seeing Slayer at all, at which point I’d figured out they weren’t actually talking TO me, just near me. Awkward glances abounded. We headed inside, checked out the price of beer, and left. Five bucks for a Bud? Six bucks for something that doesn’t completely suck? Fuck you. We went to another bar and got two drinks for six bucks.

After “processing,” we headed back in time to see Boyjazz. In retrospect, we could’ve stayed a few minutes longer to watch the guys play dominoes at the bar and then I might not have felt like I needed to have my eyes burned out. Boyjazz claimed in the middle of their set to be a “funny metal band.” They were neither funny nor metal. Well… they were kinda funny because their bassist looked like Curtis Armstrong, aka Booger Dawson from Revenge of the Nerds. We discussed how he probably never got laid, but at least he almost fucked Miss Depesto from Moonlighting.

Their set was vintage vintage. They even managed to offer up a Transformers: the Movie reference that was related to nothing. I’d give the singer points for remembering how to say Bow Wee Gran Opp Weep Ninnibong, but his off key falsetto that was a cross between a drugged out Steven Tyler and Bruce Dickinson had he been a coal miner was killing me. They had a break down where everyone was supposed to clap along, and I was impressed at how many people he got going. Then he pointed at Brandi and I, decidedly not into the moment, and said he’d keep the break down going all night if he had to, to make us “party” or something. I saw this as a challenge. Like the stoic samurai seeing who would draw his blade first, I called his bluff. They started the song. Weak. I smell your weakness, Boyjazz. I will eat your hearts.

You’re not a metal band, Boyjazz, despite that last riff you so blatantly stole from Guns ‘n’ Roses’ “Paradise City.” You’re a rock band, a decent playing, high energy, SF bar rock band. Stick with that, and stop watching VH-1’s “I Love the Eighties!” Michael Ian-Black and Hal Sparks are not good people to take your metal cues from.

So, I waited to see Goblin Cock. As it turns out, the main guy is in this big indie rock band called Pinback that girls with horn rimmed glasses listen to when they want to feel like their relationships falling apart was the guys’ fault, and not them for never swallowing. They came on, and some of my hope that was stolen by Boyjazz was restored. They came out to the strum of a single A tuned guitar, in full cloak with faces covered, and then blazed through three excellent songs off their first CD. I have to admit, I was a bit skeptical about the constant sign throwing, knowing that underneath those hoods lie haircuts made for girls but on guys.

Then it all came apart. The excessive sign throwing became ubiquitous with having a free hand. That’s not how it’s used, guys… but alas, this was a joke. Then there was the between song rant with the word “fucking” inbetween every other word. Cute. We’re all dumb. Then there were the new songs that simply stank. It became clearer and clearer that their first record was a lucky fluke. The album had been like a clever, one-off SNL skit, and I was watching the movie made out of that skit.

They all had brand new BC Rich Ironbirds. Well, one has to assume they were new or rarely used, what with the Guitar Center tag left dangling from the bass. No wonder you kept going out of tune, guys… it’s hard to tune those hard, pointy things when your soft, mealy arms are used to something so much softer.

The crowd was an interesting mix of bouncing pop-punk hippies, hip urban office workers, and fat (really, really fucking fat) frat guys throwing up double horns. They had to make up for the lack of horn throwing in their lives from spending too much time at Dave Matthews Band concerts and in front of pizzas, I suppose. You could also tell by their inept attempt at moshing that these were truly b4k4 n00bz, unaccustomed to either the actual righteous pummeling a pit can deliver, or the camaraderie. Nope… just three fat guys kind of bouncing around and at least once threatening Brandi.

I tried to be fair, I really did… but then Goblin Cock launched into a cover of Tears for Fears’ “Head Over Heels.” That was it for me. Great, you love the eighties, it’s all very funny, hee hee, ha ha! Another ironic pop-culture reference! W00t!!!1 We left. For fuck’s sake, at least cover “Shout” or “Mad World.” Those are songs a metal head might cover. Your choice shows an obvious upbringing by John Hughes movies, not Dio albums… and memorizing Bender’s rant about being abused by his father does not count as being metal. Bender was a puss. He should’ve nailed Sheedy. 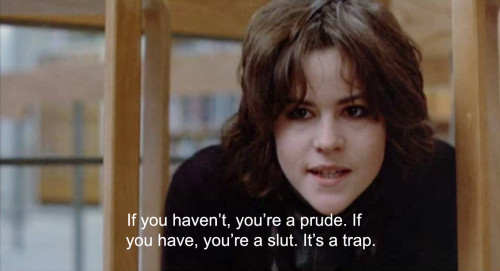 I guess there’s a big trend going on with indie rockers trying to co-opt metal ever since they saw how funny VH-1’s “Supergroup” is. Maybe they were inspired by the doddering old man on the “Osbournes.” I guess the guy from Dinosaur Jr. has a metal band now? What the hell is this? Hey guys… I don’t come to your job and knock the cock out of your mouth. If you’re going to suck, suck well. Don’t suck hard.

Metal should be fun. Metal fans should be able to laugh. Somehow, though , I feel like I’m watching a metal minstrel show. T’row up dem horns, yassir!!! OOOOOOO LORDY!!! 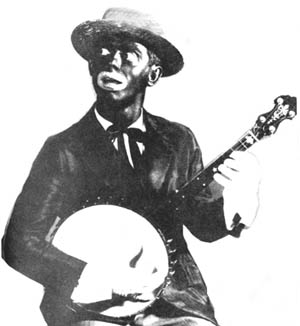