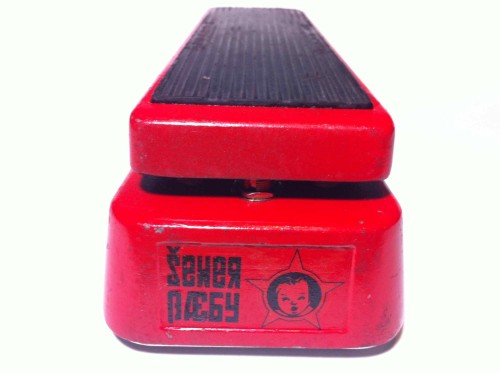 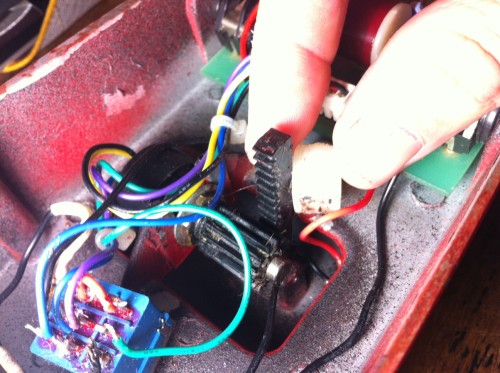 Move aside the plastic cord clamp that holds the rack against the pinion gear. Sometimes it must be unscrewed. Then, move the pot to a new starting place on the rack. If the turn starts at 0° on the pot, you get the highest and loudest frequencies of the wah first. Start it later and it’ll sound a bit more even and with less noticeable gain. Start it too late, and you won’t hear much of anything. Just be sure the rack doesn’t push past the 0° point of the pot’s turn, or you could break something.

Side note; if you have to replace that white plastic clamp, it’s a common “cord clamp” available in the electrical department of your local hardware store. That grease on the rack and pinion gear is common all-purpose white lithium grease. Most wahs could do a with a refresher of that.

The potentiometer itself is another subject altogether. Inside the cheap Crybaby GCB-95s available by the scores on craigslist, one will usually find a Dunlop manufactured “Hot Potz.” They are typically 100k in value, though Dunlop bass wahs have a 20k and their Hendrix wah has a 470k. I found the standard 100k to have the best range, even for bass. You could use any other pot here, but the Hot Potz apparently have a unique taper and are sealed.

Now let’s do some soldering. Here are the changes I found useful. R.G. Keen lists plenty of possible component changes in his The Technology of Wah Pedals article. There are other component changes listed on a good website by the name of Stinkfoot.se. I’m fairly certain I’ve tried them all, and these are the ones that worked for me. 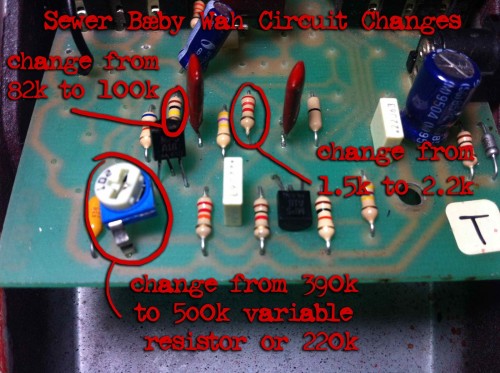 I’ll explain the changes left to right and top to bottom:
• The 82k resistor affects the bias of one of the transistors which affects the collector of one of the others. To my ears, it saturated the tone and toned down the highs a tad by taking it up to 100k.
• The 1.5k resistor shapes the curve of the mid-range frequencies. I bumped it up a bit to 2.2k, which increased the mids. As an Ampeg loyalist, ya gotta know I love my mids on bass guitar.
• The 390k resistor affects the gain and amount of bass available. Lowering it increases gain and bass levels. I added a variable resistor by snapping off the clockwise leg of a mini-potentiometer. I played with it a bit to color my tone to taste. Having modded some other wahs, in the future I’d just stick with 220k as my value of choice.

The final upgrade I made was to the all important inductor section of the wah circuit. The contemporary stock inductor needed to be replaced by something with a little more mojo. 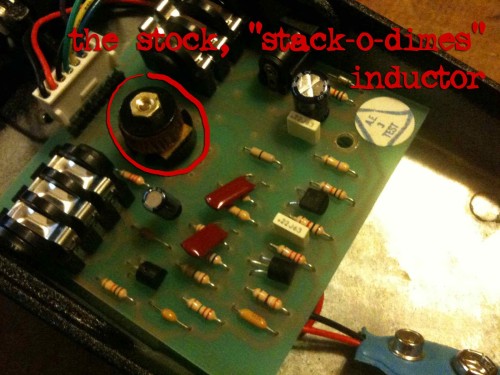 As explained in The Technology of Wah Pedals, the original, coveted Fasel inductors from the earliest wah pedals are flawed: another happy mistake by a company working on the cheap. Like a lot of components of music gear, like vacuum tubes, the flaws are also the virtue. Inductors are supposed to have an even core, but the old inductors are somehow uneven and produce harmonics in an asymmetrical fashion. Yeah, I know, gobbledy-gook. I don’t quite get it all the way, myself. The point is, it sounds richer. Lucky us, Dunlop is reproducing these Fasel inductors and they are available for relatively cheap on the after-market.

These reproduction inductors come in two flavors: red and yellow. Yellow is supposed to sound more like the original with “singing tones,” while the red inductor is supposed to create “harmonic sparkle.” Whatever, Mr. Ad Copy. I bought red because I like red.

The original inductor is mounted with four legs. The Fasel reproduction inductor has only two legs. Lucky us, the generic PCB in the Dunlop GCB-95 Crybaby has a lot of holes with which to fit a myriad of different inductors. You just have ta make sure you mount it correctly so the two holes you fit the Fasel inductor into aren’t connected. Easy enough just by looking, thoroughly done by checking for continuity with a multi-meter. Mount and solder as shown… 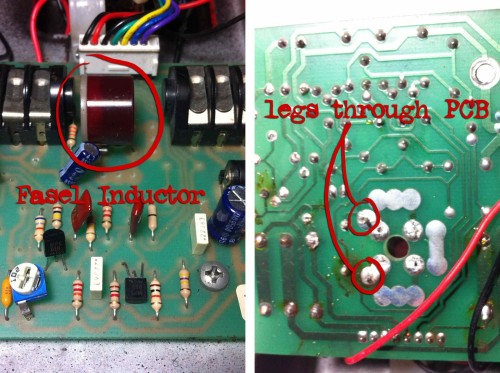 Now, light this bitch up and play! Here it is, compared to the old, stock Crybaby. Dueling wahs!

Pretty sweet, just for adding a few parts to a pedal that goes as low as $40 in the after-market. In a few weeks, I’ll post how I gussed up the exterior of the Sewer Bæby to match the improvements made to the insides. 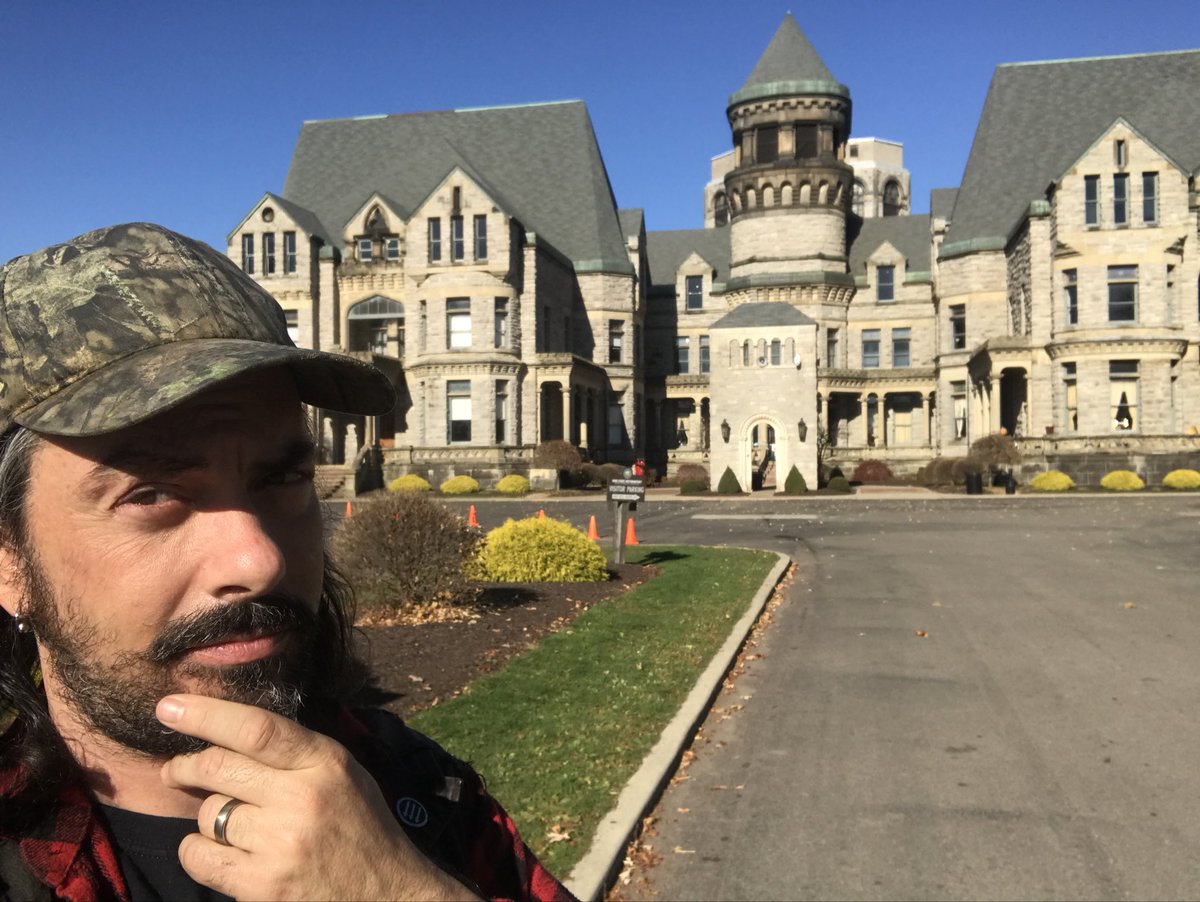 Atlas Obscura@atlasobscura
This prison was made famous by The Shawshank Redemption film. https://t.co/dcEq7OatLF
0
14
Follow @sewage666