Going back, way back, I found a broken Dunlop GCB-95 Crybaby wah pedal in our jam space. I thought, huh, maybe I could use this if I figure out what was wrong with it. It turned out to be a loose battery clip, easily fixed. Then I thought, huh, sounds okay, what would make it sound better? A few internet searches later, I was led down the rabbit hole into the wild and wooly (more like impractical and laborious) world of modifying effects pedals. With a bit more knowledge under the belt, it’s time reevaluate what I did and look at what is still one of my favorite pedals on my board, the Sewer Bæby. 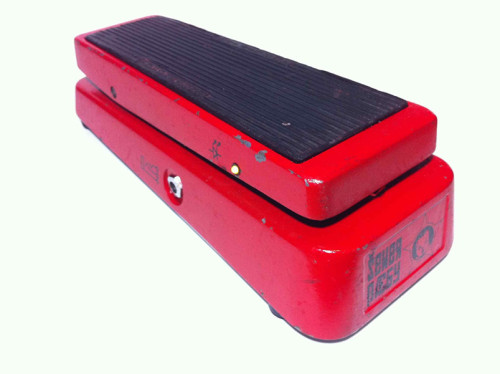 It’s a little beat up after a some years touring, but the hot rod paint job I gave the Sewer Bæby to distinguish it from yer typical Crybaby still looks alright. Of course none of that matters; it’s the inside that counts, right? Tell that to whomever you set on a blind date with Temple Grandin.

The wah is a deceptively simple circuit invented back around 1966. At it’s core, it was an attempt to duplicate, on-the-cheap, an expensive mid-range boost system from the popular Vox amplifiers. Using an inductor, a couple transistors, and a potentiometer instead of a switch, the engineers at Thomas Organ inadvertently created something very different and way more cool: a harmonically rich bandpass filter with a movable frequency peak that emulates the tonal qualities of the human voice. Or more simple and onomatopoeically put, the wah-wah.

Thanks to Jimi Hendrix and others, this has become probably the most influential effect in rock music right after distortion. Variations on the wah circuit have been made with different names, but the basic Crybaby is the most ubiquitous. Dunlop eventually bought the name and design for manufacture. They made the pedal cheap enough for every beginning player to own one as soon as they got to “Foxy Lady” in their tablature book.

Some flaws existed in the original design before things like “true-bypass” became chic, and others have been introduced with mass-manufacturing. The first problem I intended to fix was the so-called “tone-suck.” This is a real problem, not just mojo, and its cause is a shitty little switch. 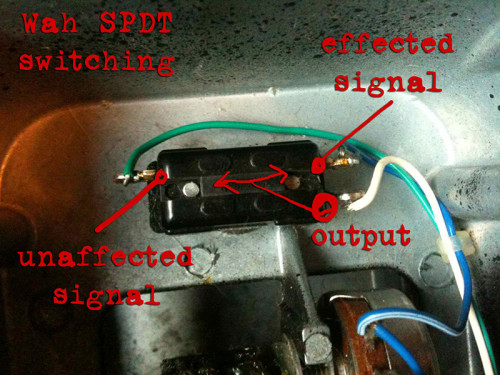 A classic wah is activated by a switch in the toe of the pedal. For many years, the only stomp switch available to pedal manufacturers was the cheap-o single-pull double-throw (SPDT). In order to work, the input signal has to be split, decreasing its voltage, so that the output can be connected to either signal at any given time. Fine, except we’re talking audio signal here, so decreasing voltage decreases audible quality. In the ’60s and ’70s, one just suffered this fate when using pedals. Modern Dunlop Wahs “solved” the problem by adding a buffer to the wah circuit. That’s cheaper than upgrading the switch. The best option, in my opinion, is to ditch that buffer and add a DPDT switch for true-bypass… or better yet, a 3PDT switch; then we can add a power indicator LED and start marching this classic towards modernity.

Here’s a picture of how I did it: 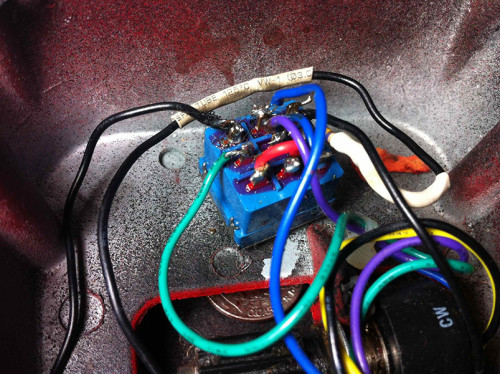 EW!! What a fucking mess is that! Like I said, this was one of my earliest pedal modification projects. Believe it or not, that mess o’ shit actually works. If I tried to update that, I’m more likely to break the 3PDT switch than I am to fix something that ain’t broke. HOWEVER, if I were to start anew, there’s a much more clean way to do this. 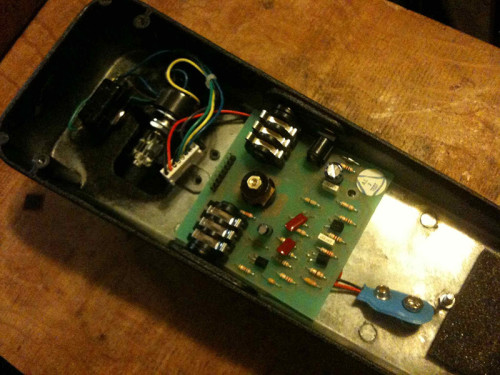 First, we can remove the buffer section. It’s janky anyway, and we’re gonna make sure that a full signal goes where it needs to, no buffer needed. Once that buffer is removed, though, the signal chain to the effect will be broken. To amend that, a new wire has to be added that will connect to the switch. I added it where the emitter leg of the MPSA13 transistor was. This will lead to the stomp switch. 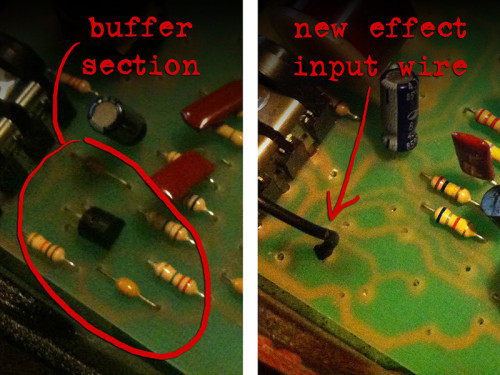 Yer standard GCB-95 Crybaby has no power indicator. By all rights, one should be able to tell when their Crybaby is on, but the din of heavy metal can mislead. While true-bypassing, there’s no reason to not add an LED indicator. There’s two nice spots to add the wires for LED power: right near the power adapter input. The Crybaby has a power cap right after this section. In theory, your LED will not affect the power of the effect as it lights up or add popping. 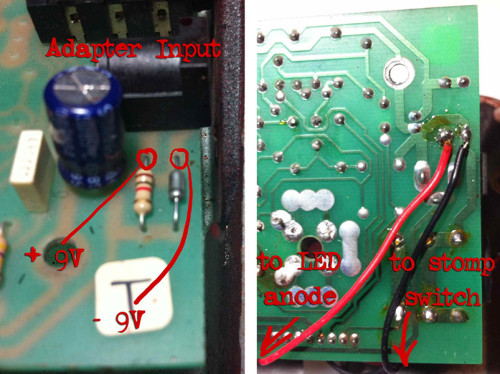 The LED has a really nice home near the toe of the treadle. There’s a hole already drilled there on the side. I assume it acts as a hook hold for powder coating. It also fits a 3mm LED with an LED holder. I did have to add a touch of glue as the thickness of the treadle doesn’t allow the LED holder to snap in securely. The wires thread in right past the pinion gear hole on the top of the base. 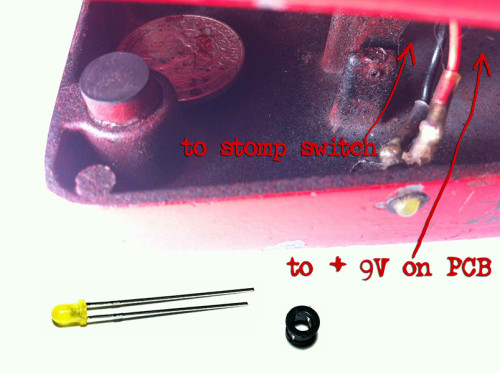 The stomp switch wiring I did was shit. Well, not complete shit, it works. There’s a better way I’ve learned since wiring this pedal, though. I’d recommend it over the slop I managed way back. Make sure you add the correct resistor value for your LED; a 1.5K will work for most. 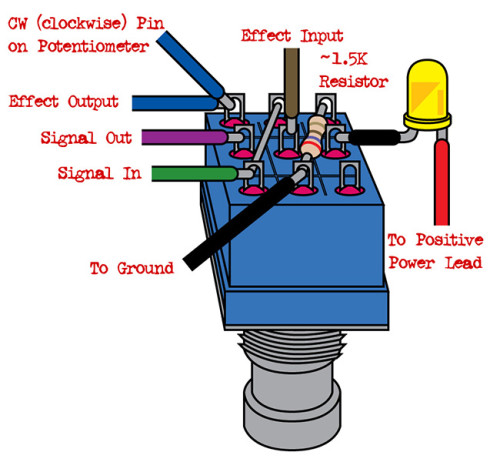 It can get a little confusing. Older Crybabys sometimes have differently colored wires and you’ll have to trace their paths. There’s also that junction of blue wires. On older wahs, this junction was made on the pot itself. On modern wahs, it’s done on the switch. Either way works, so don’t fuckin’ sweat it.

My Sewer Bæby was vastly improved by adding true-bypass. The indicator LED was a major bonus, as well. In part 2 of this process, I improve the tone and make it sound better for bass; next week, true believers.

P.S. Con muchas gracias, the following links helped this n00b on his path to figure this stuff out way back:
http://stinkfoot.se/archives/tag/crybaby
http://www.geofex.com/article_folders/wahpedl/wahped.htm

Damien Scott@MadScientistFF
Pepperoni isn't available, What are you adding to this? https://t.co/UtveskOxmW
0
11
future juggalo rob zombie bride · 1 hour ago
@sewage666
alt idea for netflix to increase subscribers: a library of content that doesn’t blow https://t.co/NrISVpCHq5
View on Twitter
Kendall Baker@kendallbaker
Netflix's new password-sharing rule: Every 31 days your device must log in on your home network — or it will be blocked.