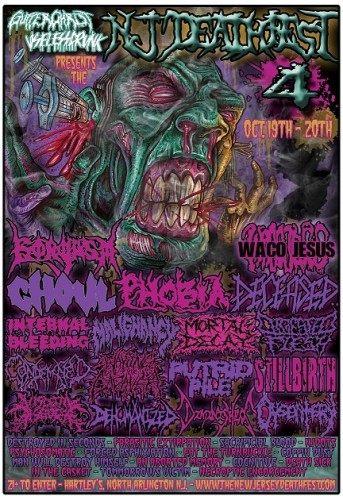 We arrived at LaGuardia in New York pretty late. Sean arranged a transport with a lad named John from Philly who was going to the fest anyway. John was great all weekend, shuttling us around and then even performing in our act when we were pinched. See, our Pete Best, aka Scott Bryan, was recently poached by GWAR for a tour. Apparently, Scott’s resumé looked good after GWAR had seen him walk around dressed as a drunk robot for two and a half months. John stepped in for us. He could also drive. He could also get drunk.

We headed directly to the fest. The first night was underway. More like underwent. We arrived right before the last band, but what a treat, it was our fiends in Phobia! No, that wasn’t a typo. This is Shane the Pain (in the ass) we’re talking about. We had a few drinks together, along with Bruce from D.I.S., Mike from Vile, and Danny and Ronny from Malignancy. Then we watched Phobia rip up a set. I hadn’t seen them with their latest guitar player, but I approve of her grinding skills. And I should… Shane revealed they were still going off the Phobia tablature I wrote back when I filled in on bass for a tour with them. I thought that set sounded familiar…

We boozed it up as long as we could at Hartley’s Bar and Grill. The festival had to be moved due to unrevealed circumstances. I’m sure there was a cover up, ala Benghazi i.e. shit was fucked. Ah well, we would make do. The room was small, but the stage was ample. Only… where would we put robots and monkeys? We had them shipped from home, then to Richmond, and then out here. It would seem a waste… aaaaaand then we were drunk. Back to the hotel with a box of beer and we’ll worry about it tomorrow. 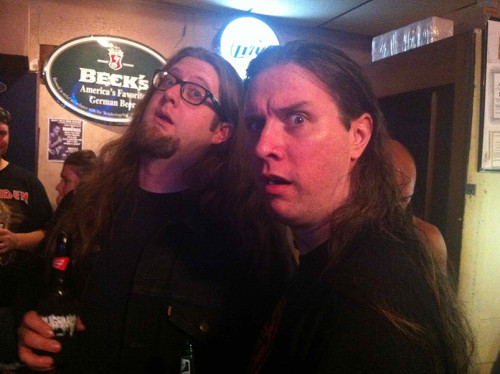 We got up the next day for my favorite East Coast treat, Dunkin Donuts. America gets the runs off Double D. I would love if there were Dunkin Donuts all over the West Coast. They are my favorite franchise. This will never happen. Why? Because Bain Capital saddled the company with 1.5 billion dollars of debt while making 600 million dollars. The company that Mitt Romney started used Dunkin Donuts as they use all companies they buy (with government loans). They give their execs bonuses, make the company pay back the government loan that Bain took out, and then sell off their own shares at a profit. No money down. That’s why you have to add their magical sweetener to all the coffee you get, because it is laden with the bitter tears of minimum wage employees who work for a company saddled with debt thanks to the greed of the one percent.

We headed to the venue around noon. I set up merchandise next to our friend Jeff Zornow who was peddling his amazing artistic wares. For all the good it did… I made sure our table was set up early in the day while the others went to sleep at Sean’s conveniently located in-laws’ house. He also went to visit and pick up our monkey and robot. I sat there… and sold nothing. About five hours later, I’d still sold nothing and handed over an empty hand of air to my bandmates so they could watch the merch. If merchandise doesn’t sell, is it still merchandise? Or is it just more shit to pay the airline to stow? It’s a philosophical question for the ages.

The first band I enjoyed of the day was Sacrificial Blood. They had a very Motörhead groove coupled with death metal vocals. I’m not sure about the vocals… but if they’d actually been singing like Lemmy, I’m not sure this crowd of death metal maniacs would’ve stood for it. In any case, they shredded. The next band I really enjoyed was Psychosomatic. They are local to our area, hailing from Sacramento. They nailed a perfect blend of blasting death metal with the early speed thrash of Slayer. Very enjoyable and energetic.

The most notable band of the evening had to be Eat the Turnbuckle, featuring the aforementioned Shlak. Imagine a kind of trudging thrash metal mixed with Mick Foley, aka Mankind, and add a dash, nay, a river of blood. Seven folks on stage, including a naked drummer, went at each other with forks to the head, broken bottles to the arms, fluorescent bulbs to the torso, cheese graters to the back, and body drops on doors. CKY ain’t got shit on these guys. The entire room smelled of blood. To be honest, it made me kinda sick. And I was less than stoked to know I was going to play on a stage covered in broken glass. The crowd in New Jersey ate it the fuck up.

Two fights occurred during the festival, two nice, big fights. One involved a band cut off early and fighting the promoters and one involved a guy doing karate kicks in the crowd and then getting punched. Apparently Mr. Ralph Macchio got upset that someone hit him back. I hate to sound old, actually, fuck it, I don’t. What’s with the karate kicks and flying elbows to the air? Whatever happened to the pogo? I like a good circle pit, and some bumps and bruises are willfully accepted. But the flying fists of fury confuse me. It’s always either the skinniest kid in the room who couldn’t punch his way out of a wet paper bag, or the fattest guy who could seriously hurt aforementioned skinny kid. Thrash metal? Fuck that, get out a berimbau and let’s dance some capoeira!

Our set was coming up. We had our big costumes staged out back behind an entrance covered by a banner for the show. It was dark as night, because it was night. The club had to shut off all the lights so as to not disturb the New Jersey suburbanites that lived around them. John was going to be our voodoo priest and Danny from Malignancy was our robot. We’d already nixed the monkey as this was going to be a calamity no matter how hard we tried. To the tune of some melodic heavy metal blaring from a car in the parking lot apparently hoping to attract the police for a fifth time, we showed Danny how to put on the costume. He walked around, we hoped for the best.

Our set was a fast and furious affair following Deceased’s excellent performance. We’d had to move gear around to make room for the robot we hoped would appear. We set up amongst broken glass on amps we didn’t know. I’d slit the banner down the middle. John came out and did a great performance as the voodoo priest. You would hardly have guessed how drunk he was. Then our set was cut short. I went to the door and told Danny, like some kind of bloody, hooded Scooter, “You’re on next!” We launched into the song and out came the saddest looking robot I’d ever seen. 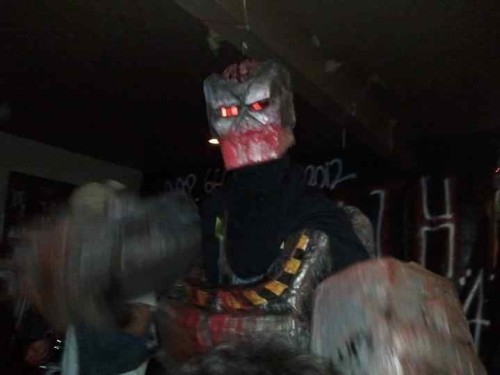 Apparently, Danny’s parents never gave him an Erector set for Christmas. He’d managed to put the arms on the wrong hands, but more importantly, he put the torso on upside down. All neck and with an enormous waist band, it looked like a metallic Skeksi constantly trying to pull up his drawers. Oi vey.

Despite our trials and tribulations, I think we sold our schtick to the crowd. The former members of the Cobra Kai Mosh Posse we’re overwhelmed with the desire to properly circle pit and even tried to stage dive… with varying degrees of success. I never realized stage diving had a learning curve. It does. And it’s ever so adorable.

Following an all too brief set by Gorgasm, the night was over. We packed up and headed back to LaGuardia for a way too early flight. Then Shlak called and informed us Sean had left his guitar behind. So we headed back to the club, and THEN back to LaGuardia. John took off to Philly and we waited while the airport opened up. It was a quick trip, it was a chaotic trip, but it was a fun trip. Trip, here, being the operative word. AKA stumble and fall (and then get up again).