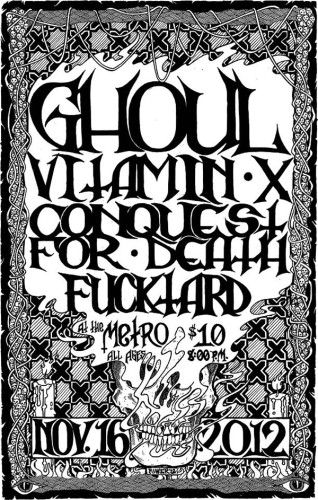 Some zipper heads might recognize this flyer as having been outside the Metro the same day they were paying twice as much to see the “Misfits all-star cover band featuring Jerry, only.” Ah, c’est la vie, how to compete with a legend? Well, you pack a smaller room with a bunch of numbskulls who beat the shit out of each other, that’s how.

It was a hectic night at the Oakland Metro Opera House as the tigers into horror punk and the tigers into horror thrash met… and got along fine, I guess. The security kept the shows as separated as they could, but there was some bleed. And some blood. For our part, we were demoted to the smaller room at the Metro. The kindly staff, however, knew our needs well. They did an awesome job constructing the first ever back stage in that room. Thanks! 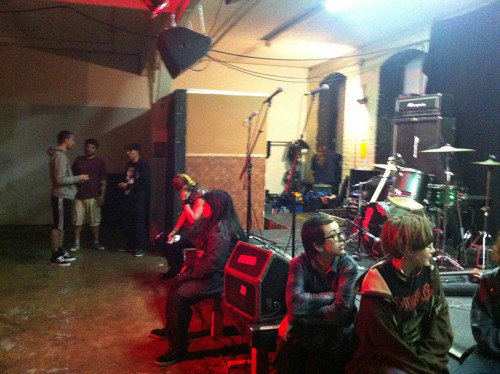 For my part, I was exhausted. The week had been full of work followed by nights of trying to replicate and build new props for our treading of the boards. Some of our finer show pieces had been left behind in New Jersey after playing the death fest there, only to be left unshipped as a direct result of the chaos following Hurricane Sandy. Yup, we’re victims, too. But Governor Chris Christie ain’t helping to make sure a robot and a monkey make their way to Cali for rigged fight. Nonetheless, the night and I soldiered on.

I missed Fucktard due to not eating all day while I was finishing a lazer chainsaw. Yes, a lazer chainsaw. More about that in a future post! I caught a bit of the band added on late, Brazilian punkers O Inimigo. They played a good set and jumped around a lot. 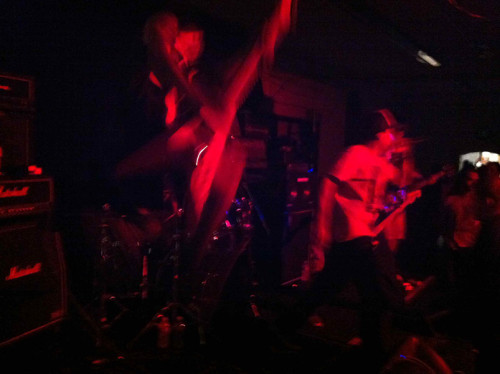 Next up was Conquest for Death. Though I’m good friends with Robert and Devon, I have to sadly admit I blinked and entirely missed their brief set. By all accounts from my band mates, it was ruling… as I had expected and wanted to see. My tired, sick ass stepped outside to sit a spell while they were setting up. I came back in, and they were done. FUCK! Time to drink with some buds at the Metro. 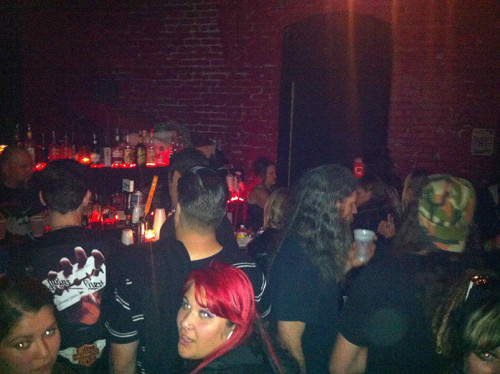 Before us was Vitamin X, the straight edge band from… Amsterdam? Ya gotta rebel against whatever ya got, I guess. They came on and kicked some major ass. These guys act like complete pros on stage, but lose none of the underground attitude. Circle pits were in excess. 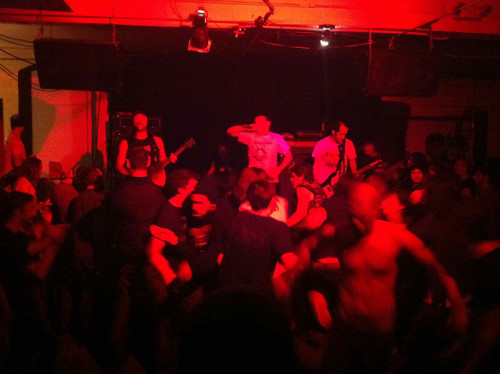 Finally, we were on, and none too soon. I was exhausted, but tried to power through so I hopefully wouldn’t embarrass my bandmates. Even so, we were called out for a second encore which I just couldn’t do. I breathed heavily in a corner of the back stage and shook my head, “no.” One is more than enough, my lovely tigers! We had a really good show, as we always do with all our friends in the town of oaks.

We headed home for the eve, to get an early start in the morning to Camarillo, CA, near Ventura. By early, I mean I drove to everyone’s sleeping places in the morning with the van and trailer with no one was ready to go. Bitches! We got a show to do! 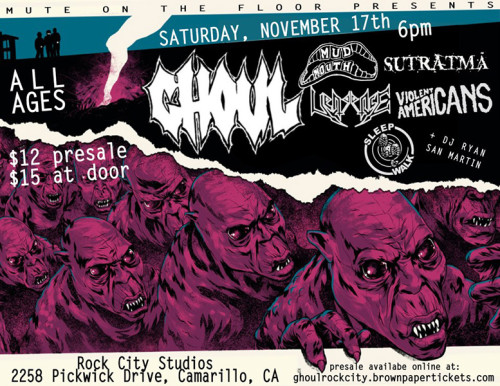 I can’t lie, I had a bad feeling about this show when we arrived. The place, Rock City Studios, was clean as a whistle. When I spotted a costume Proton Pack left over from Halloween, the owner said I was welcome to use it, but just not to use silly string. Ya gotta be kidding me. We’re a lot of things, but clean isn’t one of them. Sean held out more hope and spoke with the owner. She INSISTED we do our full show with blood spewing and all. “Just be careful of the mural!” You know, the 40′ long mural of the Golden Gate Bridge… in Camarillo.

To say that the show was a hodgepodge of entertainment is an understatement. Apparently, a lot of bands needed shows near L.A. around this time. We all got lumped together. From pop punk, hardcore, funeral doom, to us, it was odd. You could see the difference between bevested thrashers and polo shirt hardcore fans as they kept to opposite sides of the room.

Even up to the last minute, I thought the show was doomed. The crowd had been less than enthusiastic for every band before us. Boy, was I wrong, though. It was madness. Super enjoyable madness.

We had a great time with the tigers of Camarillo and I happily ate my words. The staff only begrudged us slightly for having to clean up, as Scotty had mixed the blood pretty light. Only a little bit got on their mural. It wiped right off. Phew! We left in good graces.

We headed to the liquor store in Camarillo. As we walked up, the owner was closing. Lucky for us, he opened back up and let us shop. Lucky for him, he probably made another hundred or so for the night from a bunch of stupid alcoholics. This night was blessed. We headed to our pal Leon del Muerte’s pad in Los Angeles to hang with him and Maximum Fluoride himself, Mike Fisher. 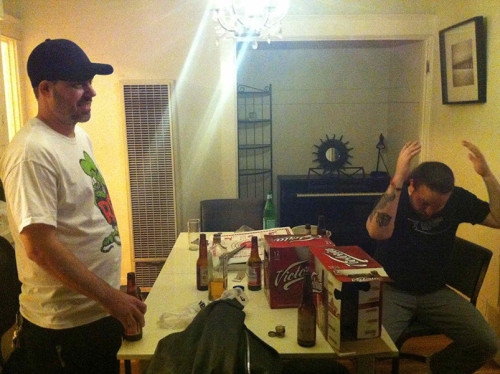 It was a lazy morning the next day before we headed to San Diego. I dropped everyone off for breakfast, aka early dinner by the time we got everyone out of Leon’s house and went on my way through Hollywood.

The night before, in Camarillo, I’d taken quite a spill over Scotty’s leg when he had come out as our robot. I landed squarely on the guitar plug for my Sennheiser ew 172 G3 wireless system and broke it. I headed down Sunset to the musicians ghetto, where Peavey, Sam Ash, Guitar Center, and Mesa Boogie meet to rip us all off. It was at Sam Ash that I found what I’d hoped would be a replacement, a HOSA 1/8″ TRS plug to mono 1/4″ plug. The one time I didn’t bring my fix it kit, wouldn’t ya know. Turns out, the actual Sennheiser cord has the tip and sleeve of the 1/8″ input wired to ground of the 1/4″ input. The cord I got has the tip and ring of the 1/8″ input summed to the tip of the 1/4″ input. Confused? Doesn’t matter… it worked. And it was a lot cheaper than a direct replacement from Sennheiser.

Off to San Diego for the capper of the weekend, the D.R.I. show put on our friend Syd and the Pyrate Punx of San Diego! 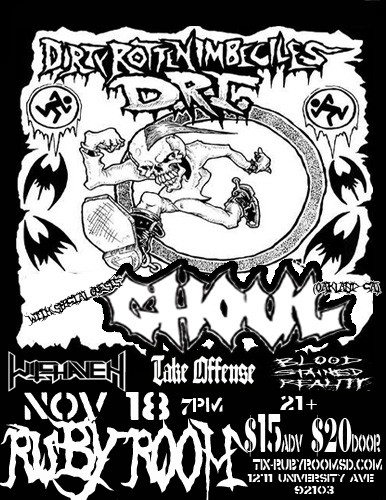 I really thought we were going to be late, but nope, we were early! Apparently, Sunday shows in San Diego are lax… I would assume all the avocados eaten down there make everyone easy going. We had enough time to do some serious fucking around as we made our version of a sandwich board walk down the street to drum up some business for the show. 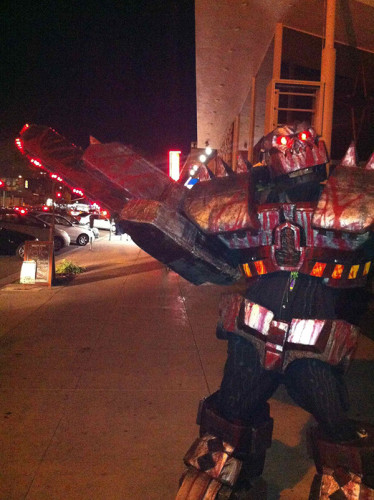 Like this show needed it… the line-up was solid enough, even without headliner D.R.I. Add them to the mix, and you’ve got a bona fide hit going on! We hung with them back stage a bit and had a good time. It’s always weird when you make friends with fellow Bay Area locals while hundreds of miles away from home. 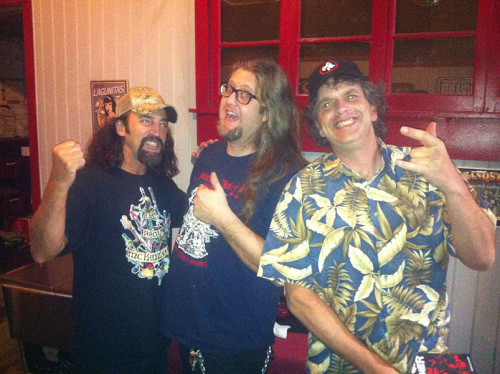 The two openers were good hardcore and then up came Witchaven. We’ve played with this band a lot this past year and they’re always great. Their sound is phenomenal and they play super tight, fast and catchy thrash. Is it a wonder why I enjoy them every time?

We came on and had a great show. Unfortunately for Scotty, the fella who’d said he’d be there to help backstage before the show completely disappeared! He was nowhere to be found! It was fortuitous that we’d been making friends with Harald O. earlier. He was on the side of the stage enjoying our set, when Scotty drafted him to help get dressed for stage. Scotty almost took a dive, but Harald propped him up and helped us immensely. I also drug Harald out onto stage and made him dance with me like he did with Watain during an infamous moment at a previous MDF… but I didn’t beat him up like Watain. Beyond that, it was stage dives, dancing, and death galore!

We finished our set and D.R.I. was up. Boy oh boy, they did not disappoint. The crowd went thrashing mad for an hour and a half (!) of Dirty Rotten Imbeciles. They squeaked out two encores and left the crowd filled to the brim with crossover joy.

The weekend was over all too quick. We had a long way to go home, and unfortunately, work the next day. Dan the Spam Randall took off in a plane from San Diego while the rest of us trucked it all night back to the Bay.

And the year is over, too, for our band of hooded menaces. What a wild ride, and the next year promises to be just as exciting… minus that whole Quetzalcoatl, end of the world bullshit. Well, it’s either that or hippies leading us to the Age of Aquarius. Frankly, I haven’t got much hope for either to be enjoyable.

Doktor Ross Sewage · 18 hours ago
@sewage666
thinking bout how lou reed, prince, and david bowie put out shit records to get out of their recording contracts and impaled was like “here’s the best thing we’re ever going to do” and handed it over to fulfill our contract with necropolis 🤦‍♀️
View on Twitter
2
107
Doktor Ross Sewage · 19 hours ago
@sewage666
good morning, boston https://t.co/YAQnxU09yx
View on Twitter