Or, from the Great White North to the Great Black Circle.

I’d been clamoring for some time to take another trip up North. It’d been a good god damned YEAR since we’d been there for the Revelations of Death fest back in 2012. I missed the amazing coffee. I missed the greasy spoons. I missed Fred Meyer. Ah, Fred Meyer… if God opened a Wal-Mart, it would be called Fred Meyer. But I digress. We were headed to play a show in Vancouver, British Columbia on the Friday, August 9th and the Black Circle Fest in Portland the next day.

People had work, so Thursday night we loaded up the van and made a run for the border… for Poutine Bell. I really, really hate making this drive at night. The I-5 through the Oregon mountains is no joke for some sleepy headed band in a big van. I always try my damnedest to avoid night drives, let alone one on a road that has taken actual musicians’ lives.

We made a plan. For one, we were stone sober. Two, we took loosely enforced shifts of around three hours each. This wasn’t just for safety; we didn’t want any one person feeling zombified the next day for the show. Rolling seven peeps deep, people had to curl up and snooze where they could. 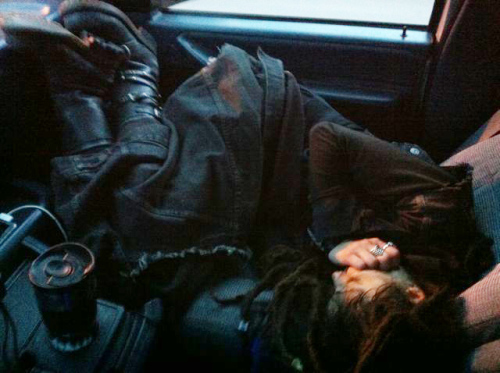 Ouch. With people relatively rested, we showed up in the late morning at the Peace Bridge crossing into Canada. We were supposed to go to the Pacific Crossing. Wait, what? There were no signs on our side of the border for that. I got on my phone as long as it had U.S. carrier service, but I couldn’t find any Pacific crossing. Well, we were close to the Pacific. This must be the same thing.

Despite all our paper work being in order from the amazing promoter Wendy in Vancouver, the Canadian Border Patrol decided they needed to check us out in the office. We were told to wait and sat in there for two or three hours… it’s hard to say, time just flies by when you see a mom get busted for “trafficking drugs” because she forgot a couple nugs in her car. They finally called us back to the desk. They’d written us up some work visas, which we weren’t supposed to need. It cost us fuggin $460. It woulda been nice to call the promoter, but we weren’t allowed to use our cell phones. We couldn’t leave until we paid. Extortion, much? 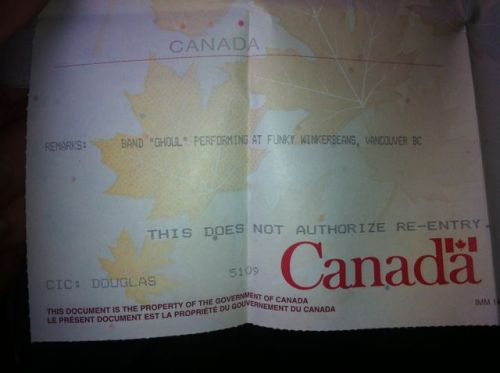 They said the visas wouldn’t allow us to attend school. We were across the parking lot and saw Toxic Holocaust walking into the office. If they made it in, we were going to be schooled… in THRASH! We couldn’t do anything to warn ’em as they slipped inside (cell phones off) so we went on our way. And they, too, had to pay the fee that was supposed to be waived.

Turns out there is a Pacific crossing: the Pacific Highway Crossing, about 15 miles away, off the I-5 on Route 539. Would we have gotten dinged if we’d gone through there as instructed? I don’t know. It’s supposed to be the easier crossing. Apparently, Toxic made the same mistake we did. Fuck it. Onto Vancouver. 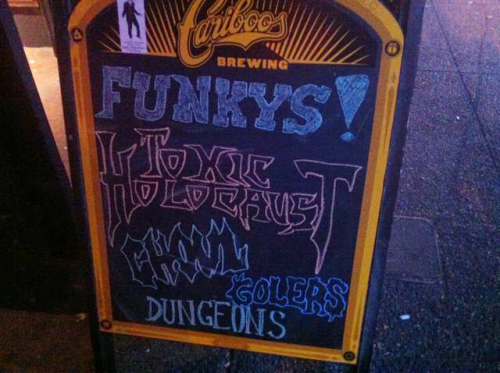 Toxic Holocause was slated to headline, but I guess they requested we play last. Something about not wanting to play in pools of blood. And what, we were supposed to deal with the fallout from a nuclear strike on the cross? What bullshit! Joel and I patched things up, though, with a good old-fashioned pillow fight. The slumber party would come later. 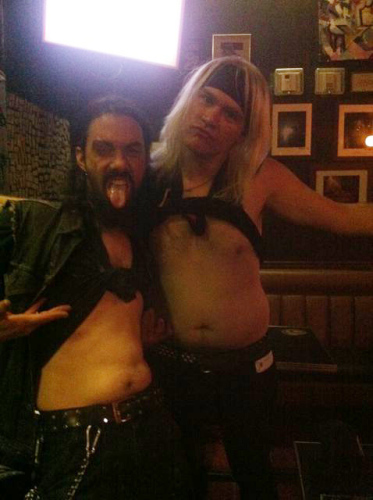 Funky Winkerbeans was a cool place, situated on the border of Vancouver’s own Skid Row and its gourmet ghetto. Well to do future date rape victims and their banker boyfriends passed legitimate junkies while on their way to eat $17 burritos at hip, upscale eateries. What a trip. 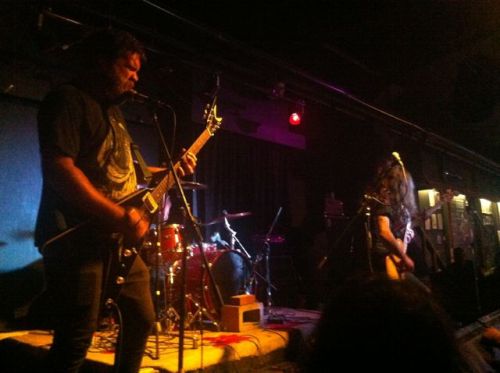 Dungeon was up first. They put in a good set with solid musicianship and tasty solos. They’re Canadian, but you could tell me they were from Savannah, GA, and I’d believe you. They need a cover art by John Baisley or Pushead is what I’m trying to say. I don’t know what to call that style, but Dungeon was a good exemplar. 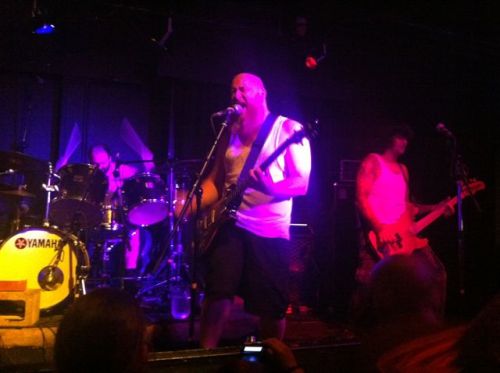 Also from Canada, Golers absolutely tore shit up. Inhuman shrieks, blasting drums, and riffs that would make Martha Splatterhead’s head splatter. I been waiting to see these guys live a long, long time and playing with them was a treat. The guitar player thought we’d played together before… but he was quite stoned. Stoned enough to wear this on stage: 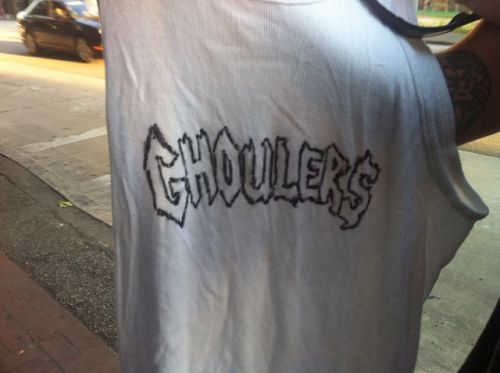 Toxic Holocaust turned in an awesome set, as always. The dogs were wild and a cross was nuked. 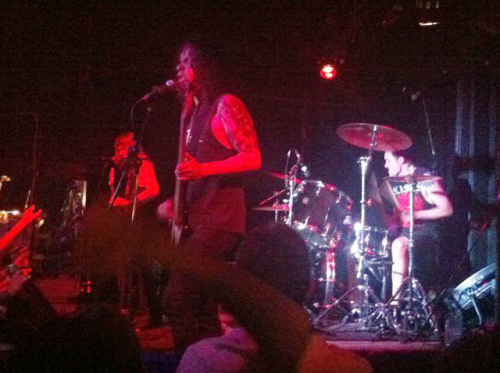 We were up next and the joint was hotter than a Christina-Applegate-pre-cancerous tit. Phil or Joel from Toxic Holocaust had already thrown up a little from playing in the sweltering effluvium. Well, time to put on a thermal shirt, vest, full-face hood, and pretend to fight foam monsters. Joy! 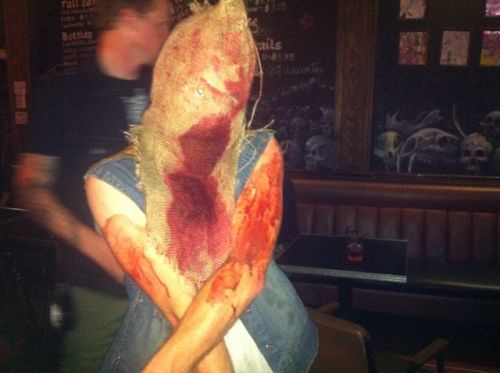 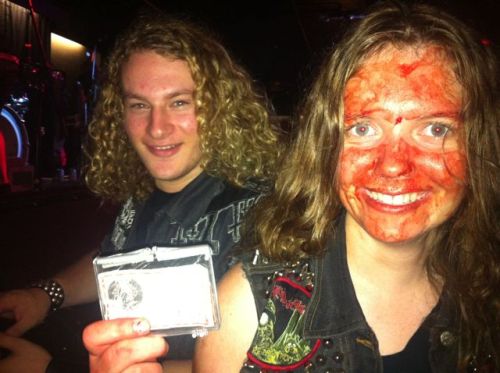 It was a good night, other than our samples getting munched on stage. Wendy from No Bollocks really hooked us up and the show was great. Toxic Holocaust and the rest of us retired to our friend’s house where the party raged much longer than humanly possible. I fell asleep early, as I oft do, amongst the din of a stereo playing Guns ‘n’ Roses at full blast. The next morning I admired my friend Pserah’s Nimbus 2000. This is one bewitching woman. 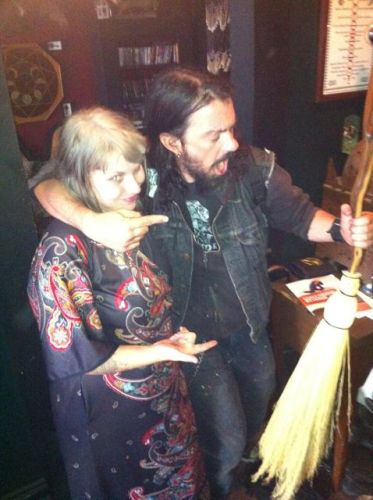 It took us nearly an hour to leave Vancouver thanks to lack of a GPS or phone that worked there, shit directions, lack of street signs, and a lot of stupid no turn signs. We got stuck at the border again waiting in a car for about two hours, but there were no hassles to come back to the good ol’ U.S. of A.

Then for some reason a mild five hour drive turned into a seven or eight hour drive. Hard to imagine that people who partied till sun rise might be a bit discombobulated. That, and trying to sync seven people’s pee cycles up is nigh impossible. 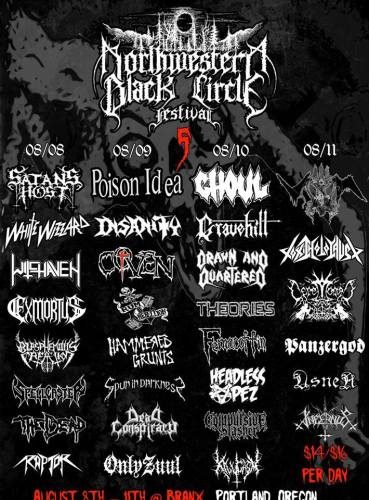 We finally arrived at the Black Circle Fest held at Branx in Portland with the third day of the festival well under way. I walked in to Headless Pez’s set and got a face full of ass. 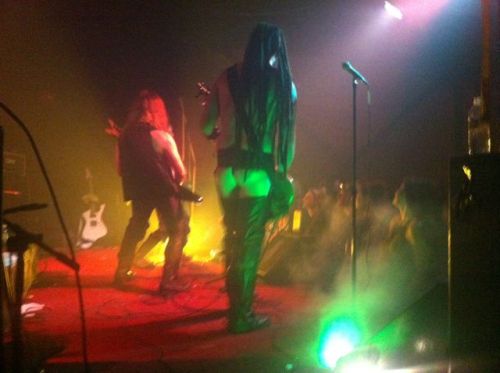 Up close, as I was, one can see the logo of Headless Pez tattooed on the bassists cheek. Ya gotta admire the dedication. And despite the zaniness, they were actually pretty fucking fine power metal. Oh, and they had a priest with a big dick and alien head or something come out. C’mon guys, who needs gimmicks like that… some dude in a costume… let yer music shine through.

Fema Coffin did just that. 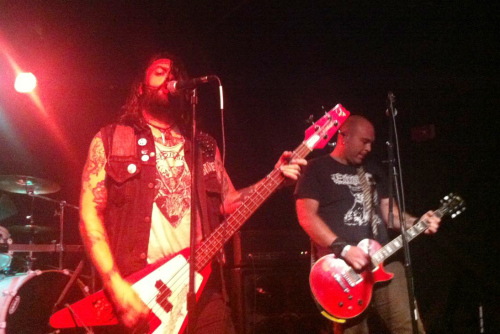 Featuring a few boys from Stormcrow and Sanctum, it’s like a split record in real life. Unfortunately, the club was situated weird and people were well scattered out the front of the club. Fema Coffin started playing to a very, very small crowd. I was bummed for my friends. Then all of a sudden during their last song, the crowd kinda just swamped in… they started rocking the fuck out, moshing, and then… Fema Coffin was done. Oopsy. No more songs. Well, people liked ’em, they just didn’t finish their parking lot beers in time.

Theories raged it after Fema Coffin. Billy Anderson and Mike Schiedt had made it out to the show, and they, along with many others, just stared at Joe Grindo from Theories rocking the fuck out. His drumming is a sight to behold. And the rest of the band turned out, too… Never mind that Rick, the vocalist, was shot a few months ago in an attempted robbery but STILL was screaming and going mad on stage. Total fucking stud.

At some point during the show I headed to the convenience store. We needed a new brain for our robot, i.e. a 9V battery. I had a fun exchange with the clerk who was wearing our band’s shirt. He made me sign it in front of customers. I swear, this kinda thing could only happen in Portland where there were two other well-attended metal shows in town. It is a strong scene up there.

I hadn’t seen Drawn and Quartered in a loooong time. They were quite a bit different than I remember, now a four piece, and playing songs a lot more like classic NYDM style with evil riffs. They had a great response and kicked some ass.

They were followed by Gravehill who turned in another bloody set of old school darkened death metal. Mike Abominator was cracking people up live with his ferocious verbosity. The crowd ate it up and raged for Satan.

Right before we went on, I headed with my friend Frank to the Lovecraft Bar a couple blocks away. Yes, Portland has a Lovecraft Bar. That’s Portland cool, right there. Anyway, he’d told me he’d made a Ghoulunatics drink special and I just had to try it. 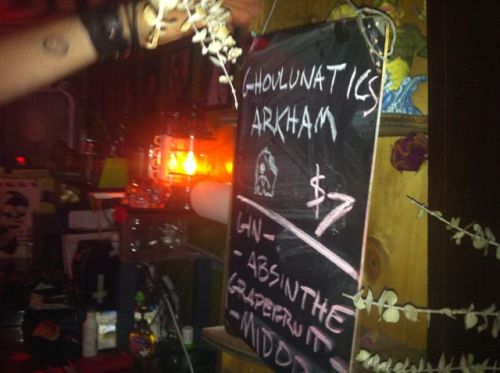 It was not a shooter… the Absinthe in it made one have to drink it with restraint; not exactly a trait of our fans. But it was delicious and it left me feeling quite rosy for the show. And what a show it was.

A perfect storm of us not fucking up along with a crowd of the most polite stage divers made for an incredible experience. It was one of my favorite sets we’ve played in recent memory. Remember, tigers, do your little dance on stage, try not to bust up a microphone, and then jump off. Don’t ACTUALLY hit the robot or the monkey. PDX can handle that, and they made our set all the more fun. So did Dennis Dread by joining us on stage for a rousing rendition of Agnostic Front’s Victim in Pain. We left the Black Circle Fest high as a kite on a good time.

We crashed at our friends from Engorged and Murderess’ house with a couple folks in tow. All I remember is eating a burrito, playing with my Lucas’ dog, and then waking up hours later with a Y&T listening session blaring around me while folks continued to party to the blue hour. The next day we headed out of PDX.

Well, we tried to head out of Portland. Though Portland is awesome for live music, it’s also awesome for stupid bike festivals that block off every municipal street, including entrances to the I-5. I drove us across town to catch another freeway, which was also, inexplicably, closed. A wrong turn, and I headed up a mountain road with one lane and no where to turn around as traffic came towards us. This big ass 15 passenger van and trailer were a real burden so I just parked. That’s when the cop showed up and told me I had to move it while I was talking to some old rich ladies who were trying to help us. Eventually, traffic cleared, I found a road where I could turn around, headed back down the mountain, back across downtown, and I found an open freeway entrance. I seriously thought Fred Armisen was going to show up at some point, because this shit was so ridiculous it could only happen on television.

The night before was why I love Portland. The day after was why I hate it.

It was a short, two show trip, but it felt like a week; a very, very awesome week. We’ll be looking forward to next time.