“Why not just get a real sampler?” Good question, me. Well, I already have an iPod I carry everywhere. It holds a lot of music with good quality sample rates. The cheapest thing I can do is make it have a second use. With that outta the way…

The most primitive version is just having an iPod (or iPhone) and loading it up with a playlist of samples in the order they are to be played. Jason made a 60 minute silent track that goes in between each sample. Run back to the iPod, hit forward, sample plays, followed by 60 minutes of silence so the sound guy can just leave the track potted up. Hit forward again, next sample, silence. Repeat. Want some help? Download the 60 minute silent sample and start a playlist.

For using it live, get a 1/8″ to 1/4″ stereo-to-mono splitter and plug ONE 1/4″ end into a D.I. Box at the club. If there’s a stereo box available, both ends can be plugged in. A stereo signal should not be summed without a proper circuit, so don’t do it. More on that later. In the meantime, enjoy your butt-simple live sampler. Moving onto the iSewage uNot…

I knew there must be a different way to control an iPod, as evidenced by the multitude of car stereos that do so. A lot of hackers have done some amazing things with Arduino micro-controllers to control iPods. But that’s a whole other language to learn. And then that language has to be translated to Apple’s language. I wanted something I could stomp on. Ross stomp, iPod go forward.

One day, I had one of those iPhone head sets in and was listening to tunes. It’s got the little click-button near one ear bud. Ya click it, it pauses, ya click it again, it plays. I clicked it twice… huh, that wasn’t in a manual. It made the iPod go forward. Three times, it goes back. It works the same on the iPhone. Maybe I’m retarded, but my brother didn’t know about it either (so the retardation is hereditary, clearly). There’s only four wires going in and outta this thing: ground, the mystery one, right audio, and left audio. It couldn’t be that complicated to replicate this function. 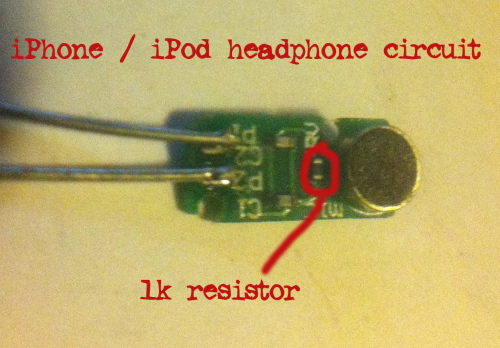 That’s what’s inside… a simple little circuit with two capacitors, a resistor, a microphone (for iPhone), and a momentary switch. The resistor / switch combo are key, here. The resistor is 1kΩ and placed between the microphone and ground. The momentary switch runs parallel with the resistor to short the connection. When you plug this in, that voltage drop between the mic and ground from the resistor is telling the iPod or iPhone, “When this path shorts, pause. If it shorts twice in quick secession, go forward a track. If it shorts three times in quick secession, go back a track.”

How does the iPod know to do all that? Who fuck cares. It does and it’s convenient for me.

First step, I had to get a TRRS plug like the one used on the iPod headphones. These are not easy to find for ordering, and being cheap, I just used one from some broken headphones. Holy turd knuckles… I shoulda just cut the wires, because this über tiny thing is a BITCH to solder. 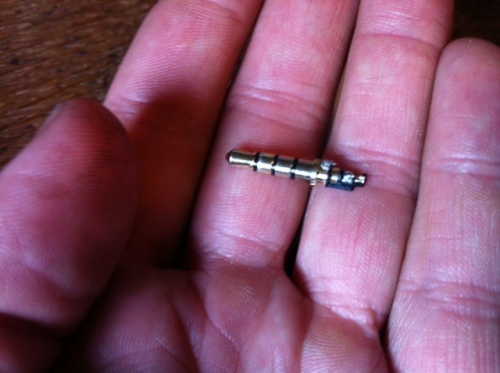 I labeled the audio, mic, and ground wires and put them in a cheap SentrySafe compact lock box. The ground wire and the mic wire are wired up to a momentary footswitch that has a 1k resistor in parallel. 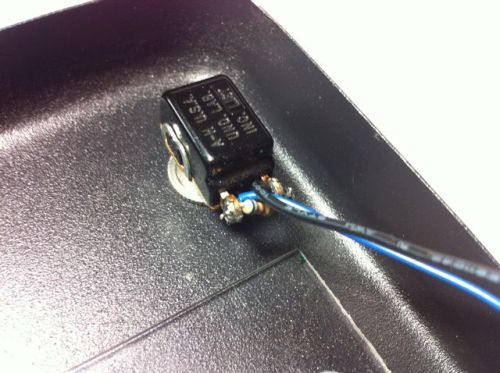 I wanted my box to go directly to the soundboard without asking for a DI, so I put a DI in my box. I looked into just buying a passive transformer because I didn’t want to have to power a DI. The only one I could find was a really expensive Jensen transformer. Instead, I bought an old Pro Co DI Box that goes for really cheap on eBay to hack up. 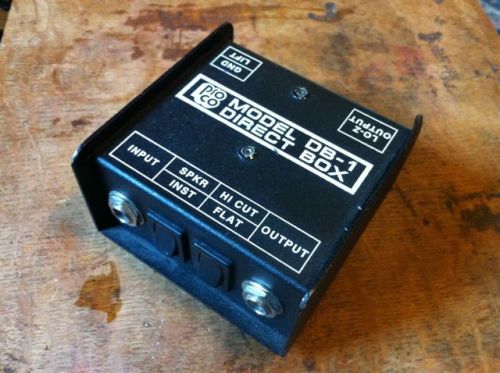 I ripped out the guts and threw away the pieces I didn’t need. I installed the transformer and the XLR output. I included my own switch to have a ground lift. Honestly, I don’t know if I even need the ground lift as the iPod will have it’s own ground from battery power. It shouldn’t interfere with a club’s sound board, but better safe than sorry. 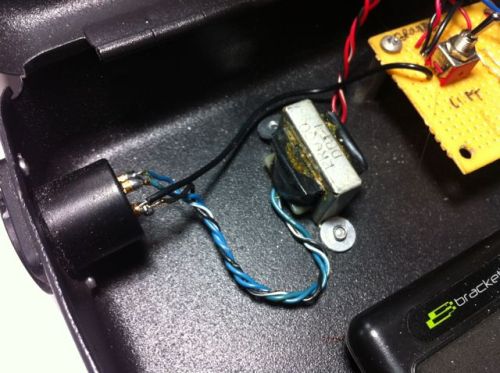 For the audio, I ran both right and left channels into a stereo summing circuit. I could have just used one channel, but I didn’t want to have to make all my sample tracks mono… just in case. A stereo summing circuit is the correct way to protect all the components. Two unprotected channels from an iPod running into a passive direct input transformer shouldn’t damage anything as the additive voltages are very minor, but still, we must be thorough for we are dumb. 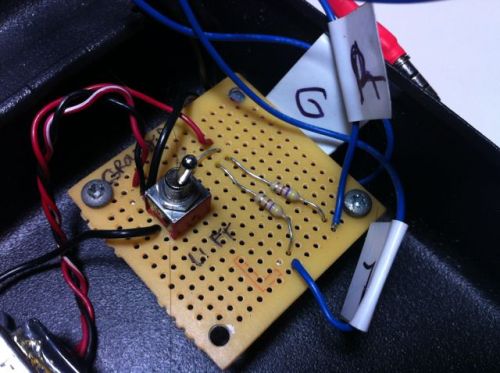 The left and right channel are summed after each is dropped across a 475Ω resistor. The summed signal is also connected to ground with a 20kΩ resistor. I know, I’m smart, right? Nope. I read it on this guy’s website here. It’s very informative stuff on why not to use Y connectors. Here’s my cribbed circuit. 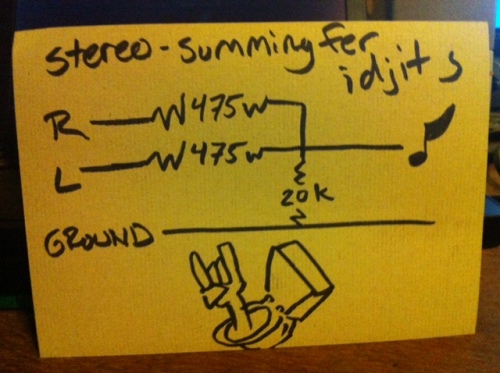 I installed an old iPod car holder so my iPod wouldn’t go flying around the box I put it in. Some two-part epoxy did the trick. I riveted on some plexiglass for a window in order to see what was playing on the iPod. Voila, finished. 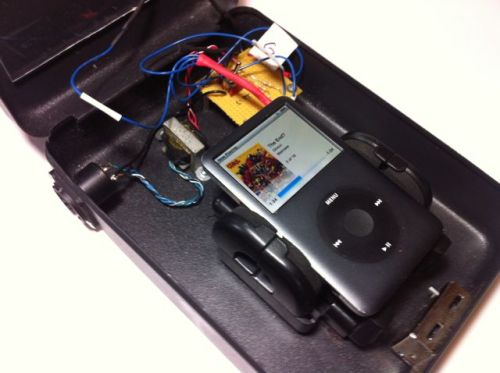 So how’s it work? It works great. I’ve used it at a couple shows already… it failed one night, but I think that’s because the sound guy ran phantom power to the DI channel. That’s a no-no here; it fucks with all the important connections to ground that control the iPod. I’ve also checked and it works with iPhones, or at least my iPhone 4. But seeing is believing… 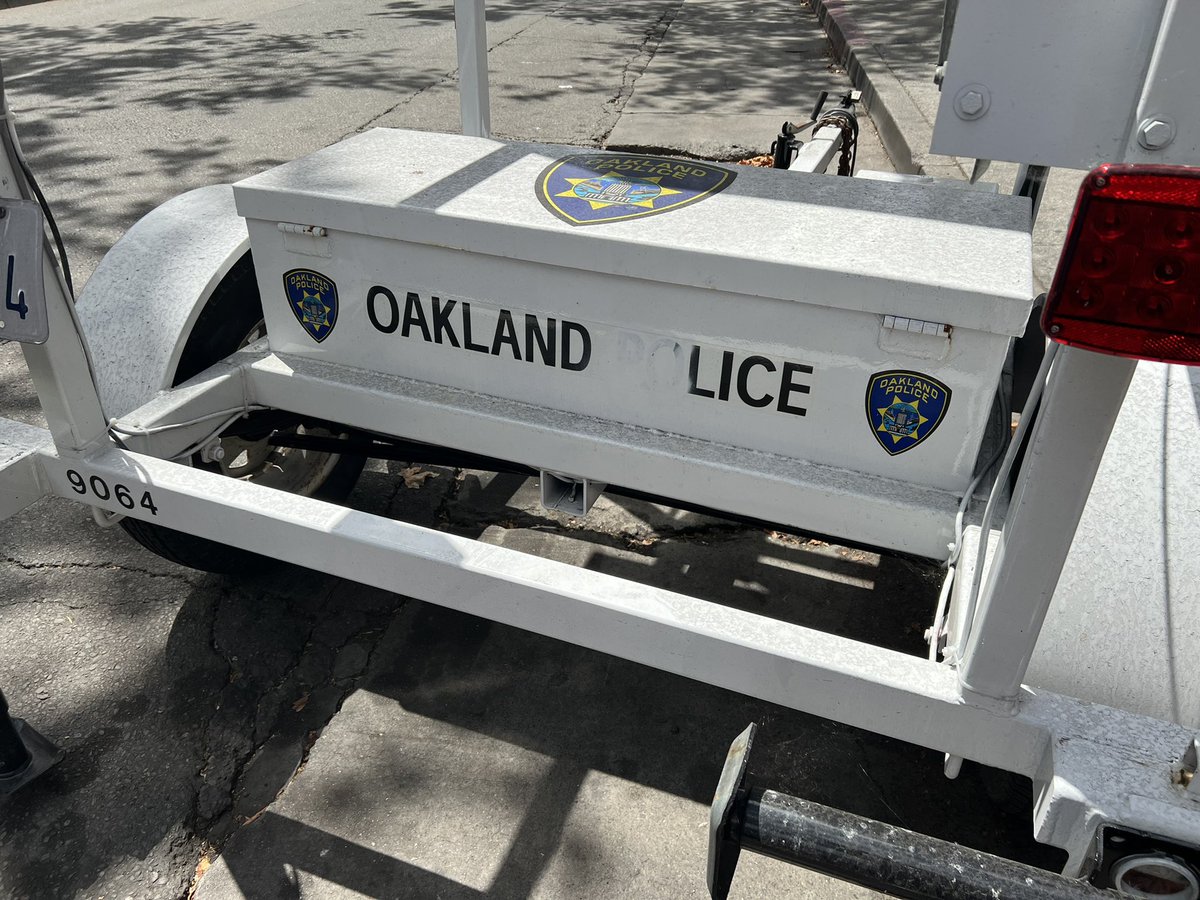 13
105
she-ross princess of power · 16 hours ago
@sewage666
i liked prey. first time i’ve been satisfied by a predator movie since 1990
View on Twitter
0
92
she-ross princess of power · 17 hours ago
@sewage666
my brain is so fried from an insane weekend and my apartment is trashed from filming a video there i can’t think straight at work i need bunny cuddles injected in my veins stat 💉
View on Twitter
0
42
Follow @sewage666