This was a continuation of an idea from a very old post. I created a foot-switchable iPod controller for myself that incorporated a DI for easy sample playing on stage. A lot of people really liked it. One such person was Justin who plays in the band Ulthar and Veil. He asked me to cobble a simple version together for him, so I did.

I call it an “iPhone controller” now because who the fuck uses an iPod these days. Do they even make them anymore? I have mine, but… well whatever, the function of the circuit accomplishes the same goal: one stomp makes it play/pause, two stomps makes it go forward, three stomps makes it go back. For fuller details on how to build one, check out the details of the old post. To see the guts of this simpler version, read on.

END_OF_DOCUMENT_TOKEN_TO_BE_REPLACED

I love old music gear because it was built to last. Modern crap seems so fucking disposable. Why even bother? Sometimes, it’s worth a quick bother because I can’t be assed to go out to the store and plunk down even $10 when I know I can do something myself. Such was the case with a cheap ass pair of Earpollution Ozone Earbuds. 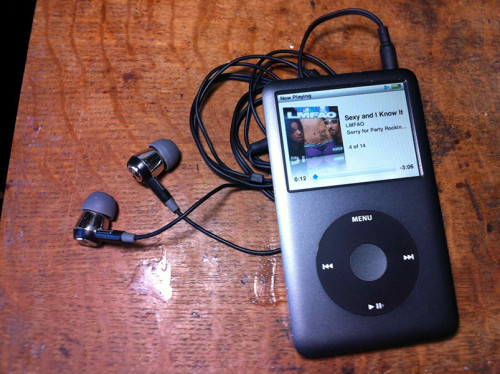 I got these at a truck stop to wear in the van while on tour. The rubber tips completely block out the inane chatter of my beloved bandmates when I just don’t have the patience. They actually sound killer with a boomy bass. I was wearing them at work when the cord got smooshed in a printing press. Only one earphone worked after that. While I was recently packing for a personal trip, I pulled them out and said, “Fuck this shit, I throw nothing away until all other options are gone.”