I started my quest for the ulimate live bass sound by adding a Sansamp Bass Driver DI and a Sennheiser MD421-U microphone to my usual accoutrements. The Sansamp allows me control of the EQ on my direct line and the microphone has a wider frequency range than most to catch all the low end. It also keeps my signal going to the mix board should something unfortunate happen to my head, like blowing a fuse. 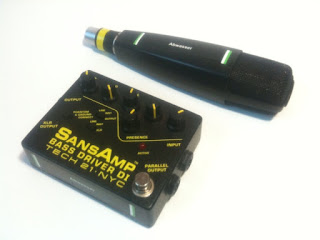 Because I can’t leave well enough alone, I had to come up with something special for the microphone and present a unified, refrigerator-box-size of brown noting bass farts. I wanted to fashion a multi-use way to mount the mic on the cab where it would sit awaiting some sound person with a cable who would surely say, “oh my, he’s so prepared and easy to work with, I will actually work tonight and not do blow in the bathroom during their set.”

I started off with a “bass hanger” from basshanger.com. It’s really just a piece of steel bent into shape to grab the towelbar of an Ampeg 8×10 bass cab. It ends in an instrument hanger, so yer bass doesn’t touch the floor. It was an idea I’d had whose time had come. Too bad I was informed someone else thought of it first when I was describing this idea for an invention I had to my bass-playing friend Laurie. 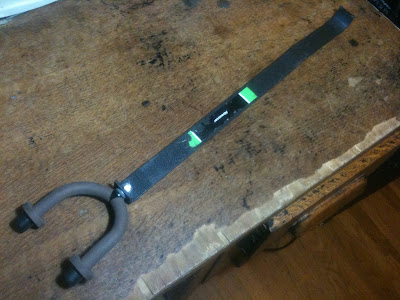 I wanted to attach a 13″ gooseneck mic clip mount to the bass hanger. Simple enough, get 5/8″ bolt and screw it on, right? Wrong. As it turns out, yer standard mic thread is 27 threads per inch. Yer standard machine bolt is not. In fact, by my research, mic stands are the only machined item in the world that use this odd thread count. My research could not conclude why, except that life is sometimes dumb.

I finally stumbled upon a stereo microphone bar from local a Oakland shop, Leo’s ProAudio. The mount had separate arms for two microphones that included removable 5/8″-27 thread bolts. 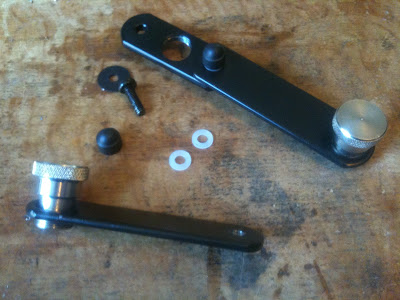 I removed one of the arms and expanded its screw hinge to 1/4″ to match the bass hanger’s bolt. I added rubber washers to both sides of the bolt to (hopefully) isolate it from traveling bass frequencies from the hanger. 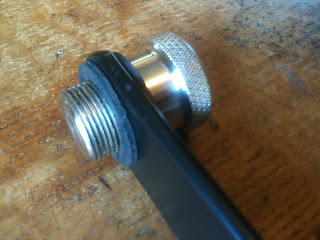 I had to replace the original hanger with one from a wall mount kit that had a slightly longer bolt. 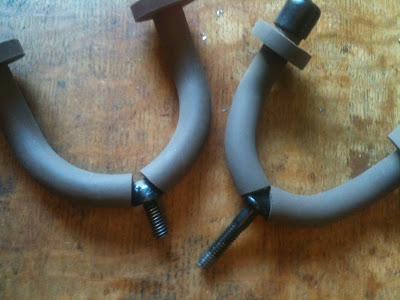 It had to accomodate the mounting arm and a series of rubber washers I needed to keep the arm from slipping under the weight of the mic and insulate it further from bass frequencies. 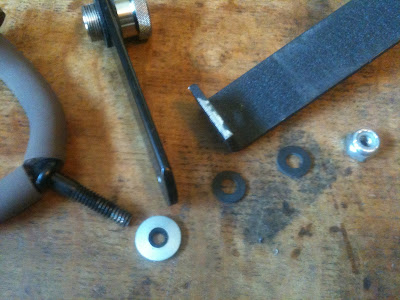 The gooseneck attaches to the clip mount that’s now offset from the hanger. 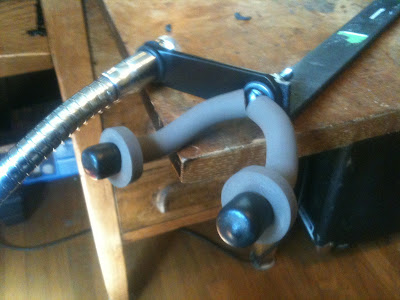 The Sennheiser MD421 requires a specialized mic clip (of course, cause nothing is easy). There’s the standard plastic one that folks often complain about slipping and being fragile. I opted for the sturdier shock mounted clip. It’s made of stronger aluminum and I hoped the shock mount would add even more protection from bass frequencies traveling from the cab to the mic. 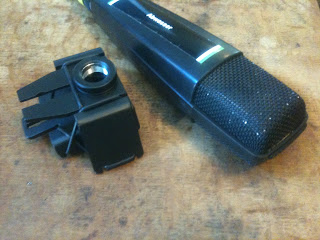 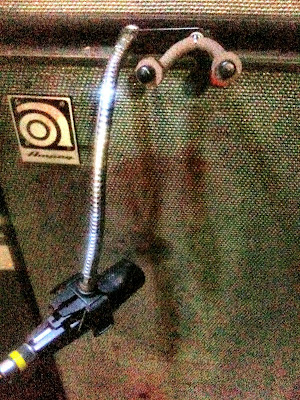 After taking this set up out on tour, I’m pleased to report that everything worked as planned. The mic was a good choice. Every sound person was happy to use it, unless they had their own MD421. In those cases, I was like, “Oh yeah, you got a MD421 set up, so yeah, like, I’m down with that because I totally know what I’m talking about.” If they started talking to me about other mic’s, I glazed over like a chicken trying to understand thermo-dynamics.

John, the sound guy for Every Time I Die, ended up borrowing the mic every night and attaching it to his Z bar mic stand he had attached to their bass cab. The Z bar (by web-site-phobic company Z Right Stuff) is a solid mic mount that sits directly on the cab. It seems the shock mount on the MD421 was all that was needed to protect it from sub-harmonic feedback, so my rubber washers may have been overkill. The hanger plus gooseneck is great, though, getting my bass off the floor and now the mic as well.