After the show in Calgary, some of the nice kids took us to a motel for a night of much needed rest. Unfortunately, the rest was not coming as 12 or so of them filed onto the room we got. No worries, these Canadian youngins were ever so polite, shushing themselves and comporting quite unlike their American counterparts might have. We had an excellent few hours discussing with them all the things we probably cared about 15-20 years prior to giving up hope on life. 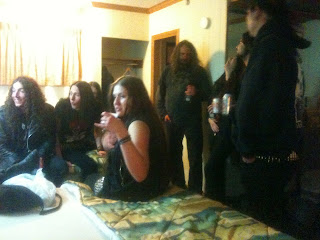 If anything got outta hand, it was probably our fault. 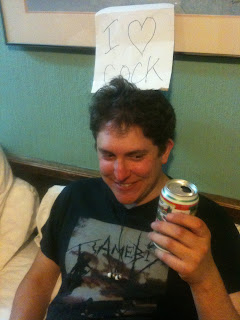 We had the following day off for the long drive to Vancouver. We took it easy, driving during the day to enjoy the majestic view of the Canadian Rockies. I think on the Canadian side, the giants play curling and drink Elsinore beer. Take off, eh, you hosers. 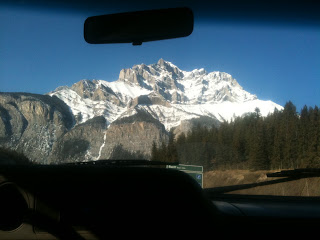 We stopped about four hours outside of Vancouver in the next biggest place, a city called Kamloops. It was colder than a witch’s tit stuck in an icecube. Luckily, we’ve discovered the Canadian economy motels are of a caliber higher than their American cousins. It seems they all have indoor pools and spas. A good amount even have indoor water slides, apparently a strange obsession for these syrup-slurping flapper heads. Voyeur cam: 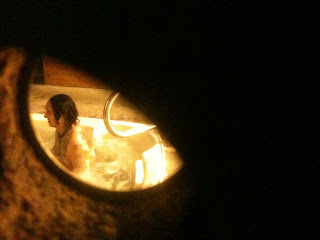 Snow started coming down in the morning. Tire chain check: check, we don’t have any. Roll out! Not very smart, but this ain’t my van and it didn’t come with chains. I was sure crossed-fingers were about as much assurance a we could get.

Without incident, we entered Vancouver. We were loading out in the loading zone of the club into their loading elevator when some lady-boy bike cop said we were unloading illegally (in the loading zone) and had to move. Whaaaaaaaat? Okay, we’ll move, and Sean grabs the last cab as I’m walking to the front with keys. She-he says, “I don’t appreciate you illegally unloading after I gave you a warning…” as I flash her the keys in my hands. Holy fuck, we all wanted to go 99% on the he-bitch, but dammit, we are acting professional on this tour! Plus we are all cowards who can’t afford a ticket. Canadian bacon sucks.

The show in Vancouver went off fantastically. We got to see our drummer friends Hesher from Mass Grave and Jay from Golers. Our new bud Germ from the GWAR production crew went on stage in our monkey suit and proved to be quite the perfomer as he battled a robot and air guitared a might club. This is the most awesomely nice guy on this tour. 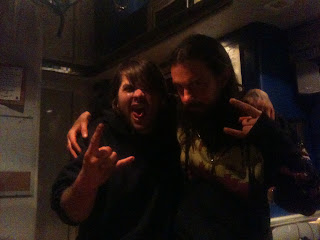 The next day we headed towards Seattle and one uppity border guard wanted to see our “carnet,” aka a “merchandise passport.” That’s the sheet that I’d drawn up with our gear list on it that no guard going INTO Canada asked to see or stamp. According to this guard, it was our job to ask and make them do their job. Kinda like when you have to stop the post man when he’s dumping mail in the street and remind him it goes in the box in front of your house. We just played dumb and annoying, she got frustrated and waved us on. God damn bacon. We were back in the land of freedom (from healthcare)!

Into Seattle, and the first of our last shows. Sad whale song! At least we had a cool place to park. 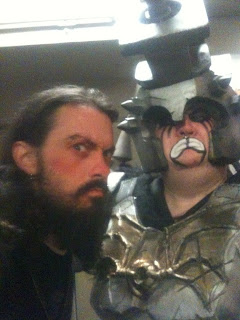 Warbeast, featuring our friend Bruce of Rigor Mortis fame, began their leg as the openers for the second half of the GWAR tour here. 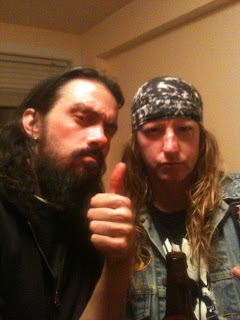 We added to the bill later and went on first of four sans pay. It was well worth it for us, as setting up shows opposite GWAR on our way home would’ve been stupid. Our only crisis was a cracked kick drum head and missing the runner by about one minute. I headed to go get one and discovered if you wanna get anywhere quick in a city, DON’T take 5th Avenue.

We still got on stage in time and had one of our best, most trouble free shows. Kogar the Destructor managed to make it into the crowd and bop all the people selling merch, Kevin, Brad, and Nicole, on their heads. Warbeast was also amazing. GWAR was loads of fun, as I sat in the back with Ryan from Engorged singing all the lyrics to Crack in the Egg, Salamanizer, and more. I think Ryan had a better handle on it than Oderus.

Our party split up a bit as some headed to PDX, some to another house, and some to Capitol Hill where I got to meet up with my lady fair and some other fine friends at Unicorn, probably my favorite bar in Seattle with the most kickin’ mac & cheese in the world. After a nights rest at Vince from Anhedonist’s pad we rolled on to PDX and met back up at the Roseland Theater. It was time for the final confrontation. 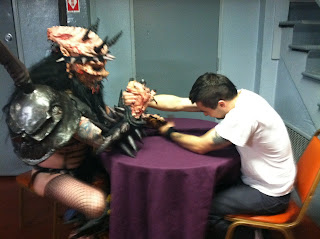 Portland was a super fun show for us, with the crowd going apeshit and the ape-thing going apeshit on a robot, and just general mayhem. At one point during a bit where I complain about being hungry, Andy from ETID brought us all sandwiches. 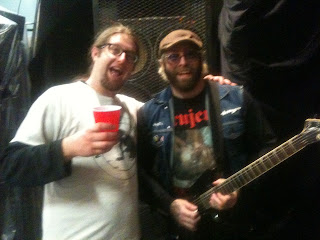 I was laughing as we threw them all around and into the crowd. My so-far trusty V4-B amp died somewhere in the middle of the show. My Sansamp didn’t, though. I’m not looking forward to repair costs, ah well. Warbeast and ETID likewise had great sets. PDX is always kind to our lot.

GWAR had asked us to help them on stage later and kill the World Maggot. We were super excited. When they hit the stage, Oderus was… not Oderus. His energy was low, something was up. In fact, GWAR was cancelling the next two shows for the wake of Cory Smoot, aka Flattus Maximus. This had to hang heavy over the scumdogs.

We waited backstage in costume at the appointed hour. We watched GWAR during the last song of their main set. Oderus began to shed his skin and there appeared Dave Brockie. He leapt into the crowd as the song ended. What the fuck? Sean and I were in shock. Dave came around to the backstage, grabbed a mic, and jumped back up. With all due emotion, he brought back and introduced the members of GWAR to the stage sans scumdog uniforms. Mike was walking around with goat legs. Jameson was without a helmet. Brad was on drums. Bob, Matt and Scott were the stagehands.

Holy fuck. I didn’t want to go out onstage. This was their moment. This was catharsis. Bob told us backstage, “fuck it, we are still doing what we planned.” Ooookay. I was still hesitant until I saw Dave point at us and say, “Ghoul, get the fuck out here!” I headed onto stage while Maggots played, and the crowd cheered. Either Bob or Matt grabbed me and started me towards the World Maggot. I, like Jerry Springer and hundreds of slutty broads before me, was going to be lunch. I got fed to the Maggot and reborn into the hands of Germ on the other side, as he screamed, “fuck yeah, Ross, come on!” Oh man. I was in a daze. Dan, Dino, and Sean were busy chopping off the head of the maggot while I went downstairs to change.

I headed back up as Sick of You was playing and saw our robot, aka Scott Bryan, and our monkey-man, aka Peter Povey fighting on stage with GWAR and the slaves as the Biledriver squirted the crowd. At some point, Dave brought out Cory’s guitar and held it for the crowd to revere. I couldn’t contain myself, and jumped next to Beef, aka Jameson, and launched into the last chorus of Sick of You. I got a Biledriver to my backside from Bob. I left the stage watching robots, monsters, and slaves hugging. What the fuck.

Tour was over. Lots of hugging all around and a few beers over at Ground Kontrol. A lost DDR tournament. Basically, a blur. Like this whole tour.

It’s the biggest tour I’ve ever been on, with monumental highs and the most catastrophic downs. Totally indescribable. GWAR has always been one of my all time favorite bands, digesting their music, lyrics and movies, seeing them on every tour since my first on This Toilet Earth… this was the most amazing opportunity. I didn’t wanna see my heroes go through something like the loss they felt on this tour, but it’s heartening to see them pull through it. 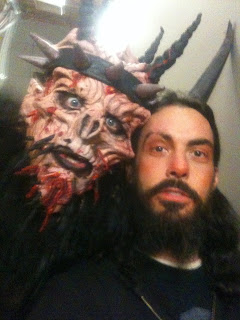 Thanks, guys, I wouldn’t be doing what I do without you. 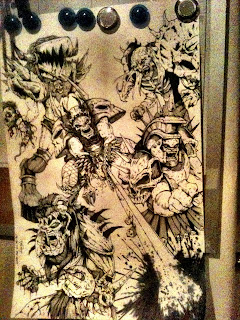 (drawing from a fan hanging in the GWAR tour bus)

2 thoughts on “Killing Kids in America 11”