Some word about gear… Obviously, Ludicra has gear issues. Why? Because we are a poor working man’s band buying our own stuff in used shops. So of course, our used shit takes a dump on the regular. The trick is to make things work while on the road. 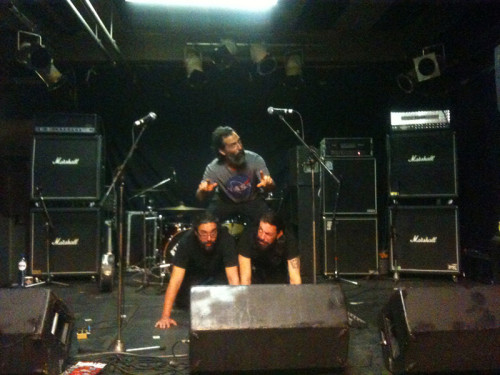 At home, we have John’s amp sending out AM radio, mine blowing tubes, Christy’s with weird plug issues, and Aesop’s drums doing what all drums do… break. Now we are in foreign lands, so it’s anyone guess what’s going to happen on stangers’ gear. 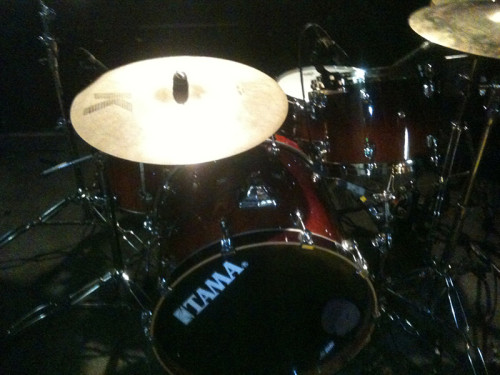 Aesop’s set is blessedly simple. He plays a four piece drum set, one kick, one rack tom, one floor tom, and a snare. A tetris player’s dream. He’s also got a high hat, crash, ride, and china cymbals. The aesthetic is less is more. This doesn’t keep us from pausing constantly to deal with drum issues. He brought his own cymbals and pedals, leaving a throne and snare behind. Personally, I think these are ALL essentials for a drummer to bring, but Aesop differs even while lamenting the snare being tuned too high. He did bring his special needs short guy snare stand. His new Mapex Falcon pedals, while playing smoother than his older Iron Cobra pedals, seem to have some issues with the basic ingredients – we’ve already snapped springs and mallets. The mallets seem to be made of pig iron, totally cheaply cast metal that doesn’t bend: it only breaks. They are the first drum pedal Mapex has made, maybe the second gen won’t have the same issues. The drum set we borrowed is a Tama Star Plus, solid but not so loud. A far cry from his sponsored Alegra set, but good for a Tama, nonetheless. 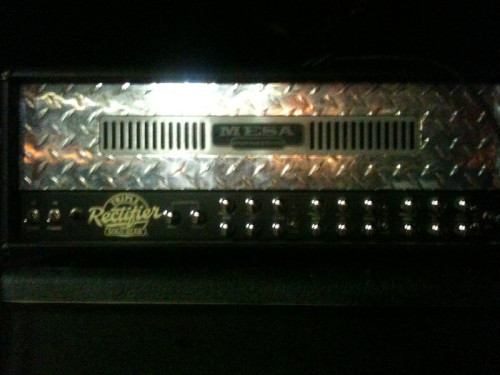 Christy normally opts for a solid state head. It used to be an ADA, but (thankfully) more recently she switched to the much underated Ampeg VH140C (that I recommended). She likes a tight, compressed distortion, which is why she picked out the Mesa Boogie Rectifier to rent. Sure, it’s tube, which I’m convinced she hates after watching me and John’s tube amps fail on stage, but this is a good compromise for her with her model amp unavailable for rental. It’s a big ass amp capable of the super saturated distortion she likes, and the weird options on it allowed her to play a full stack one night even though the cabinets had mismatched Ohms. Now if we could only figure out all these other buttons and switches… God damn 70 pounds of shit in a 50 pound bag. 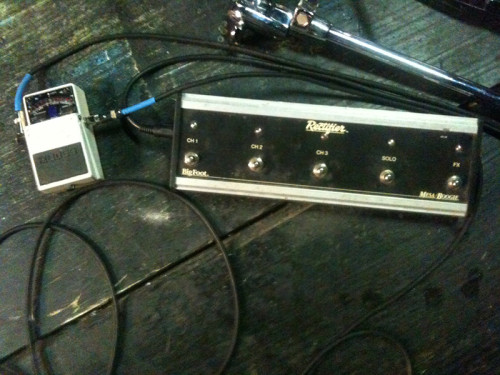 Christy’s view of the floor. This amp has a ton of channel capabilities, though Christy is using only three: clean, distorted, and a quieter distortion. I think she was disappointed initially by the lack of some chorus, but that’s really more of a solid state ’90s amp feature. Luckily she can switch power to “squish” or some such nonsense that Mesa Boogie added. I wish they would make a version of the Triple Rec that just did the one thing it did well, and didn’t cost an arm and a leg. Oh yeah, they did, it’s the Peavey XXX, the most embarrassingly named and labeled head in the history of the universe. It sounds comparable, though, and costs way less. 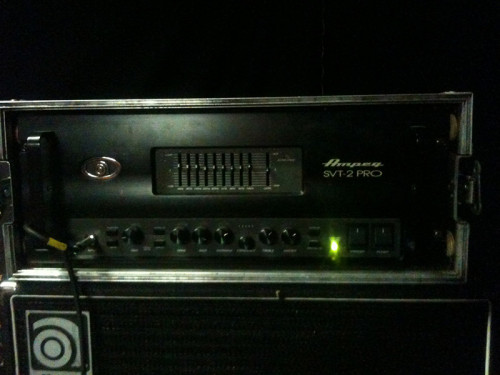 I’m rocking an SVT2 Pro, the same amp I have at home. I initially got mine from my friend Janis who played in Stone Fox, L7, and Fireball Ministry many years back. I really had no idea what I had. It’s essentially the same as an original SVT, but with more bells and whistles and an unfortunate rack design, so common to the garbage of the 90s. I rented this not only for familiarity, but I had intended to use the tuner out and graphic EQ footswitch for some bits. Unfortunately, my Big Muff was having some weird issues with my instrument cable, so I had to forgoe the tuner out. Now I just have a super heavy and amazingly awkward balanced head to carry around. The sound, however is tits on a goat. It would be perfect, but for the Ashdown cabs we were graciously lent by our friends at Skull Crusher in Dresden. I just don’t think they have the same resonance as an Ampeg cab, but I make do and appreciate the gear. 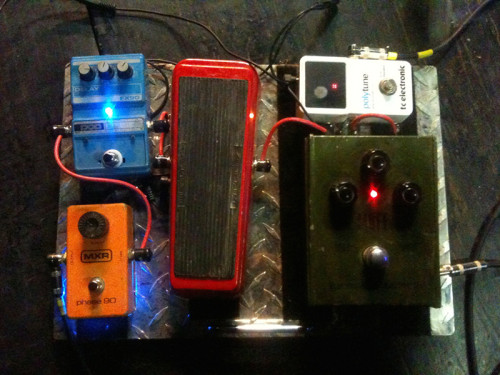 My pedal board is the most outrageous of the stringers, even more so considering I’m the one with only 4 strings. I’ve got a TC Polytune, an item I’m reconsidering. It’s ability to register all strings at once for tuning is impressive, but I keep getting quiet yet inexplicable noises out of it when it’s engaged and should be silent. Moreso when the fuzz is on, too, amplifying it. A stage tuner needs to mute completely. The BOSS TU-2 is a standard I may switch back to. From there, I have the coveted Russian Green Big Muff, version 7, regarded highly for it’s bass boost and costing about 9 times now what it did when it was new. I decided to ruin it’s collectability by adding a power jack, a pointless endeavor because it caused a ground hum. Now it’s back on battery power and working great and worth less on the after market. The jack was having issues when I plugged directly into it, but the George L patch cables I use on my board seem to work fine. Its a weird issue, but these jacks are notoriously cheap so I’ll probably replace them when I get home. The wah pictured was one of my earliest modded items. It was a basic crybaby and I changed some components to make it more bass friendly. The delay was another fixer upper, making the crappy DOD relay switch into true-bypass, and the phaser is a vintage 70s model of the brand made famous by Mr. Eddie Van Halen that I added a light to and made true-bypass. I could play a fine show with none of this, but damn, it’s fun to dick around with. Sometime I have to reign myself in so hopefully I don’t become “that guy.” Unless I already am. All of this fits in a standard brief case on a pedal board I made myself out of leftover diamond plating I bought from a metal shop. 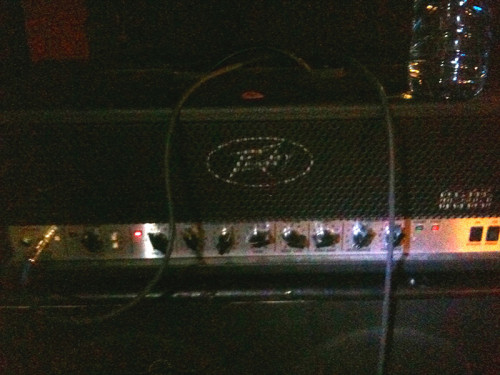 John is currently rocking the Peavey 6505, which is supposed to be a 5150 with a name change. I’m not so sure. The new name was a nod to their history when the amp was released, the company having existed from 1965 through the release year of 2005. John wanted to use a 5150 ever since Josh from the Fucking Champs, whom John refers to as “Obi Wan Toneobi,” recommended one to him. I thought it odd, considering the rep of the 5150 as a death metal amp ever since Bill Steer used one for Carcass. In fact, the distortion of the 5150 was even too much for the man it was invented for, Eddie Van Halen, so they made the 5150 mark 2 (which also had a better clean channel). It’s a far cry from the sing-song voicing of John’s JCM 800 lead, but he’s rocking it and it sounds good. At the first show we had it, the 5150 seemed to take a dump, but we had the 6505 as a back up. John’s been fiddling with it ever since and thinks the 5150 was better. I suspect it might be more like the 5150 mark 2 which many complain isn’t as “wild” as the original, or maybe the components are cheaper, or tubes… It goes on and on. Ear magic perhaps, or maybe it’s real. Whatever, I have been enjoying John’s newly more gnar gnar guitar tone. I think he’s sold on buying one of these at home, and then maybe we can stop hearing radio through his old Marshall. 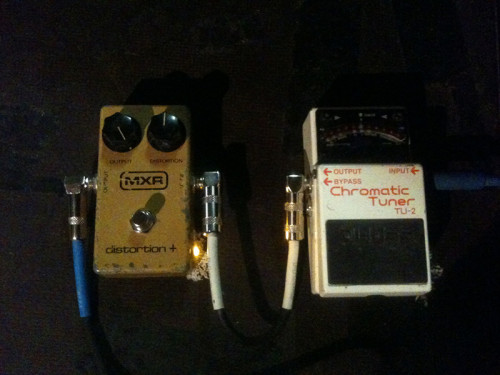 John’s much more modest pedal set up, as compared to mine. He has the typical tuner that EVERYONE should have on stage (I’m looking at you, Woe) and a vintage ’70s MXR Distortion+ that I added an indicator LED to through a hole in the box a previous owner had made. Good thing, too, because I can hardly tell the difference when he turns it on. I think it’s more noticeable with his Marshall, which had lower gain so you could hear the extra distortion kick in. He could run it through his effects loop on the 6505 so it came after the pre amp and then it could really boost the signal, but that’s just more cords for Sir Cadbury to leave behind on accident. Sometimes John uses a flanger for his clean parts, but he decided to travel light this trip. I’m kinda missing the Flock of Seagulls flying over.

In Utrecht we got to have some fun when we played dB’s, a club / bar / practice place, the likes of which could never exist in the U.S. They had metric shit ton of gear available so we were able to make two complete, real Marshall stacks with the amps crossed over and eight 10″ speakers of the delicious Ampeg variety. It was like we were playing in a Guitar Center, back when they gave a shit about guitars and not DJ paraphernalia. Let the sonic pummeling commence!