END_OF_DOCUMENT_TOKEN_TO_BE_REPLACED

To get ready for the group art show we’re having all February at Eli’s Mile High Club, I had to frame a grip of posters I’d done. There’s three ways to do this:
1. Take it into a place and have them framed by a wage slave. That has the benefit of making one feel like part of the elite that drives around in a Prius.
2. Look around salvage stores and just throw that shit into any frame that it kind of fits into. Now one is sticking it to those fucking elitists who drive around in a Prius.
3. Do it yourself. 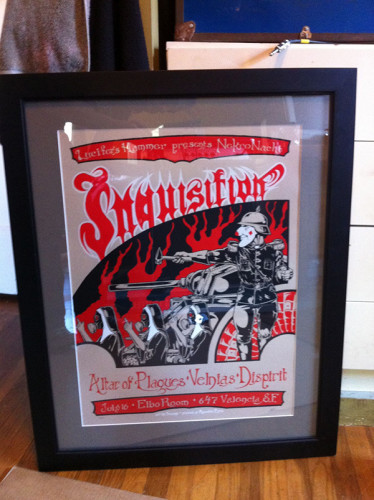 I like art under glass. I like it with a nice, cut mat. I like it uniform. I like to have my cake and eat it as cheaply as fucking possible… aka a doughnut. Look how nice that poster looks framed properly. It doesn’t look anything like the poster that didn’t sell at all at the show, or that I was told I should be killed for having designed. Now, it’s not a mockery, it’s corpse-fucking ART. And it ain’t that hard to do it yourself.

END_OF_DOCUMENT_TOKEN_TO_BE_REPLACED

Chris Oxford, an old friend and guitarist for Depressor, contacted me and Sean McGrath about doing an art show at a local bar. I’d wanted to do an art show with Sean for some time. What gallery would have our gorenography? Chris got the date together for a February art show at Eli’s Mile High Club and that was the kick in the pants we needed. 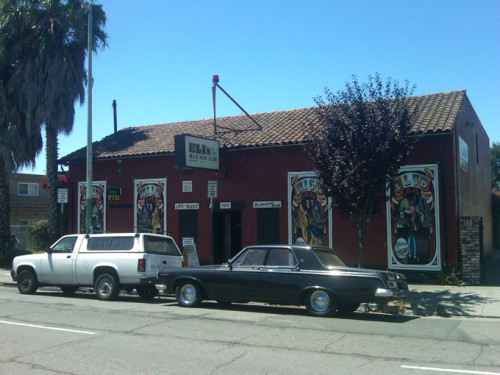 Eli’s Mile High Club has become a beacon for crusties, punks, and metal heads looking to get their drink on in North Oakland. They have a show space and a wall for displaying art. Last night we took all our framed pieces (and some unframed) to Eli’s. Amidst the din of barking dogs on ropes and metal from the DJ booth, we got to work.