I went for years and years playing bass without this toy obsession… music gear. I started playing bass through an old Ampeg SS150 guitar head. I really didn’t know any better, or how to play bass. I still don’t. Eventually I graduated to a real bass head. I picked up a couple BOSS pedals, the ODB3 and the TU2. Pretty standard for someone no more interested in their gear than that it makes some noise.

Honestly, I was too busy spending money collecting Star Wars toys to be bothered with gear. Now I hate Star Wars.

It took me more than a decade to organize, but eventually I picked up a proprietary BOSS pedal cases. You know, the ones designed to hold pieces of disposable crap from Taiwan. It’s basically a garbage bag, but it served me for a number of years.

There was an attempt to modify that plastic piece of shit pedal case from BOSS to fit a few other things. That was a non-starter from the get go, considering the things I’ve added to my set up. It’s not called a Big Muff because of it’s petite size. Then I watched the boys from Wolves in the Throne Room on tour as they lugged giant SKB pedal cases and had to check them when flying because of their size. With luggage prices ever increasing, this solution did not fly. <-- sweet pun. I decided to DIY a pedal board and case. As a registered basshole, I have more pedals than I ever need to play songs about eating poo. To exceed excess, I limited my board to what I could fit in a standard briefcase. If you have more than that on stage at your feet, you’ve likely got a small dick. Or an enlarged clitoris. Or you’re a bassist overcompensating. 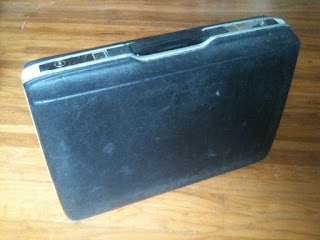 I picked up a good, sturdy, used briefcase from local salvage store, Urban Ore. Urban Ore is an amazing place full of tons of old shit, with just a hint of cat piss in the air. Almost all the props in Impaled’s “Preservation of Death” video were cobbled together from crap there. After throwing around and stomping on the case, I found it was a good fit and would protect my precious cargo. I could easily take it on a plane as a carry-on. Never mind all those wires and metal boxes, Mr. Homeland Security.

I took measurements and made some mock ups of a pedal board with cardboard to make something I could pull in and out of the briefcase easily. It came out to 16.5×11.75″. After further experience picking up a few other briefcases that my board fits into, this seems to be close to a standard fit. 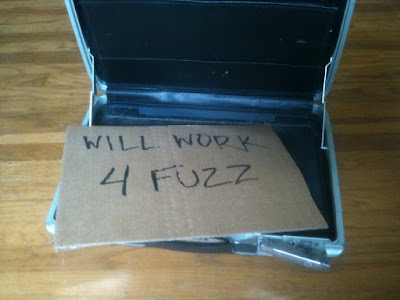 Then the board itself: I couldn’t mold plastic. I tried a thin wood one, but it felt too weak. I thought about strength and machismo, which defines me to a tee, and I came up with diamond plate. You know, that chrome metal shit all over tool boxes and semis and usually surrounded by men with guts (not bravado, the tummy kind). They sell diamond plate metal sheets at Home Depot, but the price is a bit high. A little research, and I found Alco Iron and Metal. They’re a huge metal shop (not music, the ferrous kind) just south of Oakland in San Leandro. They had scraps of diamond plate that they let me have for a good price. 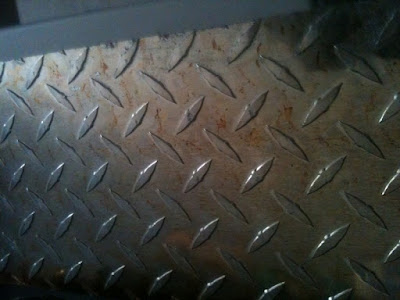 I cut the metal down to size using a jigsaw and a Bosch brand blade made to cut metal (U118G). Nothing more special needed than that, even with the thick grade I picked that wouldn’t bend underfoot. I also sanded the corners to be rounded. 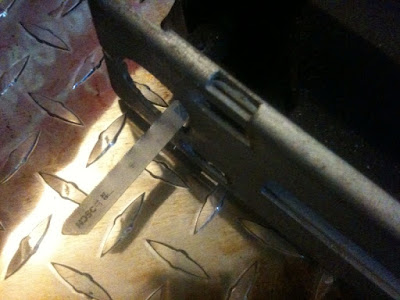 It took some elbow grease, patience, and lot of WD40 going to keep the blade slick. I also used liberal amounts of WD40 when drilling holes (a must to keep your bits sharp) for a handle I decided to put on the pedal board. It’s a cabinet handle also acquired from Urban Ore. I initially thought I’d put two on the sides of the board. After experimenting with the briefcase and some pedals, I ended up with just one handle on the end of the board. It would be easier to pull out of the briefcase and leave more space for the pedals. 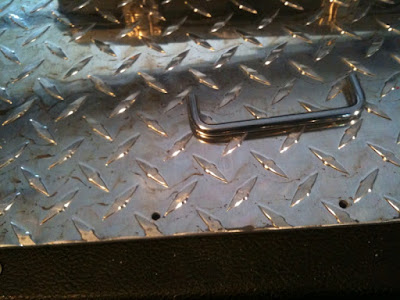 On the side for the bolts, I bored out a cavity for the heads of the bolts with a larger drill bit. This way, my board would lie flat on the ground. 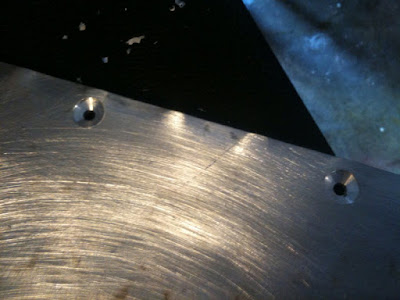 I realized that this was a gigantic metal plate I was going to be placing on stages surrounded by electricity. I bought a sheet of rubber used to line tool boxes from Orchard Supply Hardware and cut it to fit my board. Using a huge amount of two part epoxy well mixed, I affixed the rubber to the bottom of my pedal board. Now, it wouldn’t slip and was safe from grounding out against any loose current. I’m not fond of dying. 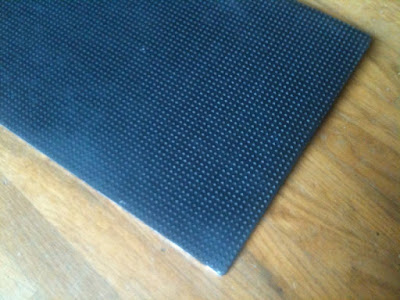 I’ve tried to come up with many different solutions for how to secure a pedal to a board… I’ve failed. There is no better way than Velcro. Thank you space program for making sure my pedals don’t move around and that I don’t have to tie my laces. I got “industrial strength” Velcro brand strips from Michael’s Arts and Crafts Store. This stuff is so strong, it holds to itself better than the sticky backing holds to the pedals if I lift them off. One could probably do with standard Velcro. I decided to just do a few strips. I want to see that diamond plating because it’s hella manly. The board fits in the briefcase perfect and pulls out easy. 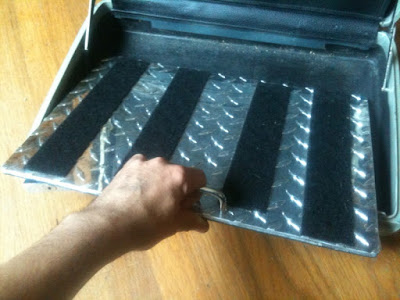 Then comes the fun part… populating the board. This set up has changed several times since I made this pedal board, but this is current. It’s like a really expensive game of Tetris. All the pedals are wired for power from a single Visual Sounds One Spot and can stay connected with George L patch cables. 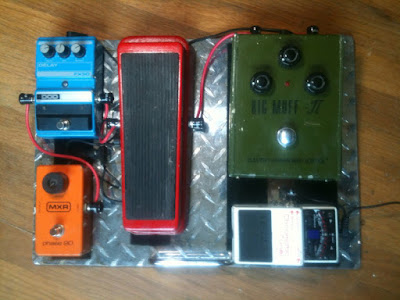 The board and pedals, nestled in their new panic room, are safer than when they were floating around and are easily accessed for a quick set up. 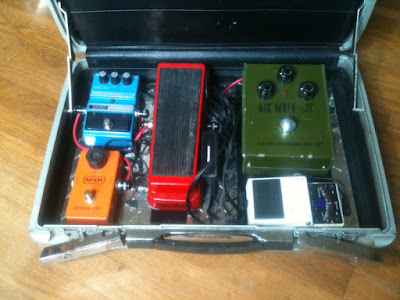 As an added bonus, the brief case had extra pockets on top that fit my two 20′ instrument cables. Organized, just like the business man I was never smart enough to become. 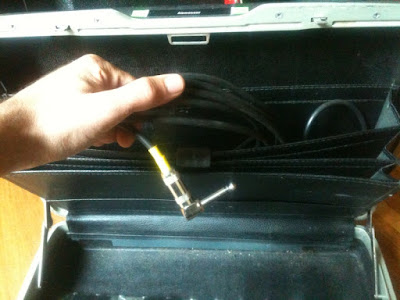 My final touch is the mark of the G.O.R.E. Corps, the Rxxx. Partially out of vanity, partially so it doesn’t get lost in a dark corner and left behind after a show. I mean, if I lost that phaser, wah, and delay, could the show go on? COULD IT? 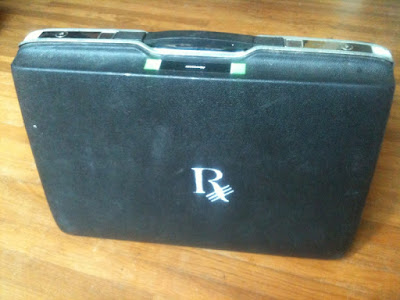 It’s enough to chill the soul.

One thought on “Pedal Bored”

0
32
future juggalo rob zombie bride · 16 hours ago
@sewage666
my nephew got an award for doing well during the run, hide, defend drill 🤩 very cool world we live in https://t.co/OiX8i3TI4r
View on Twitter