In my Low End Theory 1 article, I expressed my overwhelming satisfaction with the Low End Theory 2 article, I explained the custom mounting of my sweet MD-421 using a Bass Hangar from basshanger.com, a common microphone gooseneck, and the Sennheiser MZS-421 shockmount. In all their wisdom, Sennheiser did not make the MD-421 fit in a standard mic clip. But at least they did make this mount that would isolate the microphone from nasty bass vibrations. It is perfect for my “on the cab” mic set up. 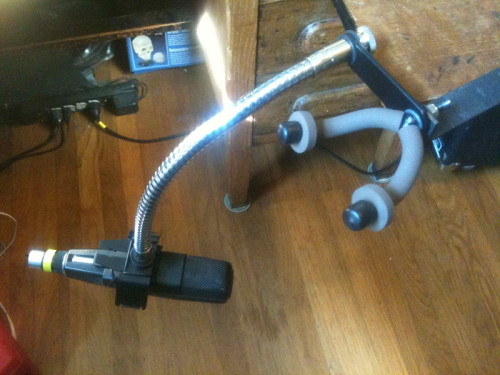 That is, until one of the rubber bands broke while I was on tour. Then a second rubber band broke. The remaining bands held the mount together until the end of tour, but the shock absorption was nil. Luckily, one of the broken bands was stuck in the divots of the mount. With that and the help of some photos, I was able to trace its original path and re-thread replacements.

Well, rubber band is a bit of a misnomer. I replaced the broken bands on the side with #17 O-rings from the Home Depot plumbing department. They were a perfect match. A slightly larger O-ring might be necessary to replace the middle band.

During the repair process, I drew up this handy guide to the MZS-421 shockmount so anyone can easily fix their own. 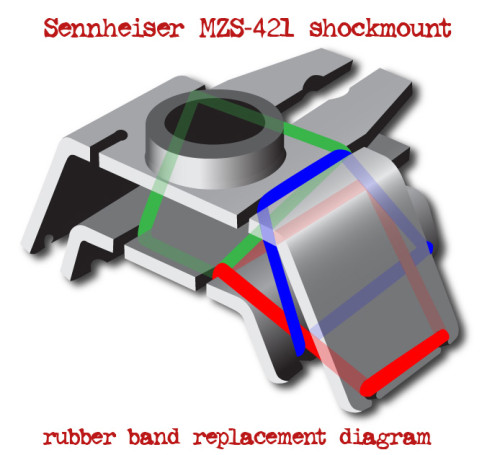 Such a large segment of the population is just itching to shock mount their MD-421 microphones for mounting on a bass cabinet… I’m sure this will help millions.