Waking up in the morning in Nagoya, I was reminded I don’t like Nagoya. According to Steve from Butcher ABC there are a lot of noisy grind bands from Nagoya. His theory is that is because there is shit all to do in this burg. That seems reasonable enough to me.

Sean and I got up to get some breakfast and do a whole lot of nothing again. Eventually we made our way back to the hostel and it was time for us to go to the show. General Surgery was not going to be going as they were still sleeping. Swedes know how to get their party on. They haven’t quite mastered the quick recovery, however.

Club Upset in Nagoya was a nice place with pretty damn good sound. Upstairs on the sixth floor there was back room with a backyard and a massage chair. Before you think we had it too nice, the backyard was covered by a blue tarp and the massage chair was incredibly painful. Downstairs the building had a pizza place. I longed for a pizza so bad. Cheese and dough! This is a rarity in Japan. You know, a meal that satisfies your hunger. At least for a vegetarian, it’s nigh impossible. I counted the seconds through our sound check until I could get one of these pseudo-Italian grease wafers. It was god damn delicious, even though they put corn on it. Maybe I was just that happy to eat cheese. Yay cheese! I feel sorry for lactose-intolerant folks, but then again, that leaves me with more cheese. 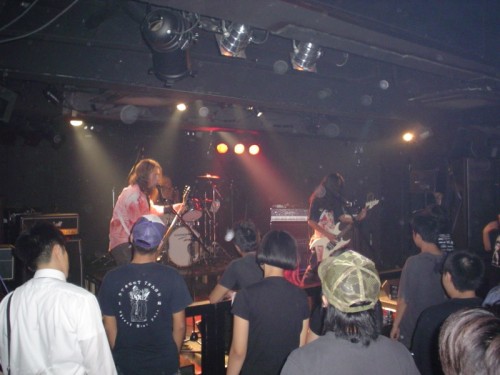 We headlined the show in Nagoya. Before we did, we got to see a bevy of awesome Japanese bands. I guess this is the joy that Nagoya held: good music. There was fucking awesome d-beat crust from Disgust, weird grind from Unholy Grave, total noise obliteration from Spacegrinder, and some other bands I don’t quite recall but were pretty damn fine, also.

We had a fun set, though it was obvious it was a bit late for the crowd. Still, we and they rocked it out pretty damn hard. 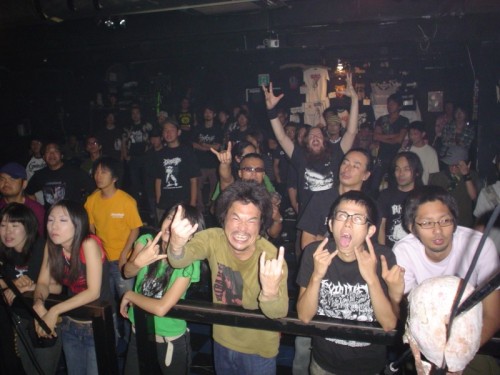 After the show, Naru organized a gathering at a Chinese style Japanese place. Again, getting Japanese food in Japan is hard. Sean took off back to the hostel, but the rest of us along with General Surgery and members of Disgust went. The evening went like this: drink, scream, yell, drink, do something stupid, drink, obliterate, drink some more. The Swedes decided that while sitting shoeless on the floor, as is Japanese custom, they should expose our hosts to some Swedish customs, like throwing towels, spitting beer into each other’s mouths, throwing food, yelling at top volume at the entrance of more beer, and throwing up on your plate of food and then re-eating it. In all fairness, I sort of initiated the last one inadvertently. I decided to show everyone the custom of sucking a long noodle up one’s nose and pulling it out one’s mouth. Tomas, General Surgery’s one man entourage, showed himself a true cultural pioneer by trying this also and ended up gagging himself and throwing up. So then I snorted rice up my nose. Then Tomas snorted his own vomit. He definitely won that battle.

We left the place to go back to the hostel. Johan and Tomas decided to leave the hostel and venture into the dark night by themselves. They were still gone by the time Impaled got up to leave Nagoya and head to Tokyo. Later that day I would hear their story about getting lost, bribing a cute, young barmaid to keep her bar open for them, getting lost, shitting in the street, being found by members of Unholy Grave the next day, and being returned to the hostel. It’s a question of whether these Swedes are out to party or just to self-annihilate.

After spending three nights in a city I didn’t particularly care for, I was starting to get a really bad impression of Japan. Nice people, but ugh! Nagoya just really had nothing to offer. On the drive back to Tokyo, though, I really saw some of the epic beauty of this place. Rolling hills were covered with trees so thick, you apparently couldn’t even enter the forest if you wanted. Shrines pock marked this verdant green landscape of mountains on one side, while the ocean and beaches lay on the other. At one point, Mt. Fuji was pointed out to us. I couldn’t see it, just some big mountains. I was told to look higher, and there, above the clouds, the peak stretched into the ether of the sky and scraped the heavens. A haiku:

Some flowery prose?
Sorry, it inspired me
The sights made me gay

The show in Tokyo was day one of the Asakusa Extreme Fest. Of course, I took off as soon as I could following sound check to try and see some of Tokyo.

The first thing I got to see was the Bandai building around the corner. Bandai is the toy company responsible for Sentai shows like Mighty Morphin Power Rangers and Ultraman. They had actual Ultraman costumes in the windows and a life-size fiberglass reproduction outside. That was pretty sweet, so my hopes were high. I took a right and walked for two hours and saw NOTHING! I was super bummed and was thinking how much Tokyo must actually suck. Turns out I should’ve made a left, because later that night we were taken to the giant fucking Buddhist temple and surrounding market just a couple blocks the OPPOSITE way I had gone earlier. I felt pretty stupid having missed it earlier, but finally we were sightseeing. 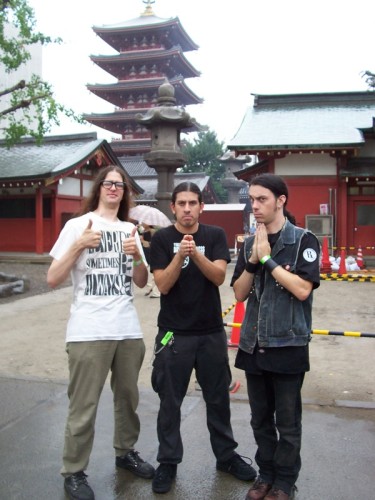 The temple is a huge complex. The market is huger. I took a bath in incense smoke burning in the middle of the square and got my fortune from Buddha told. It was a bad fortune, number 71. It said all my future endeavors and travels were doomed to disaster. I was pretty pissed off at Buddha, that fucking buzzkill, until I was told you are supposed to tie the fortune these wires and leave it behind you, thereby leaving your woes to be cremated by the monks. Okay, Buddha… I’ll let that one slide. 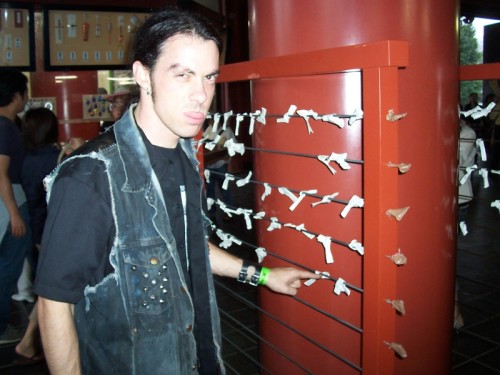 The show was cool. Again we got to see a load of awesome Japanese bands like Fastkill and Ssorc. I think the one most people were interested in the evening was Gallhammer, an all girl band who all dressed up something like the ghost girl in the Grudge. They had creepy dead-eyed stares and played very necro metal. My first thought was about how much San Franciscans would flip the fuck out for a band like this to come there. Japanese girls and necro metal would reign supreme.

We had a really awesome set, and had to play two encores. Not really planned ones, either, which always feels good. That’s as opposed to the planned ones which make me freaky embarrassed. Everything was unplugged and we were pretty much made to plug the fuck back in and rock out for a couple more. Fun! And that was the end of our shows in Japan. To paraphrase a completely awful quote given the context of our geographical surroundings, “We shall return.”