We got into Japan with little incident. In fact, a very little incident. The first thing Sean noticed was the slightly lower line dividers on the way to customs. In this land, we will be like unto GIANTS. 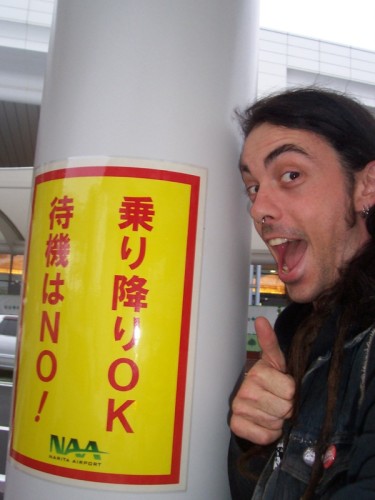 Naru of Butcher ABC and formerly C.S.S.O. met up with us at the airport and we were soon acquainted with one of the many completely uncomfortable compact vans we would be forced to become accustomed to. It was quite a journey through some traffic and rain to get to our destination in a tiny suburb of Tokyo. I was luckily exposed to pictures of General Surgery exposing themselves the night before. Too bad we weren’t there. They had gone to Tokyo, so we decided to start drinking their alcohol. Most of it was vodka, so eventually we gave up and just got some beer. From a vending machine. Now THAT is awesome.

We sat around. We are too find out sitting around is kind of the thing to do in Japan. Well, I say that with some caveat, as Sean and I have had to walk approximately three miles just to find a bench. I guess milling about is the more proper verb.

We waited for General Surgery and then we went out to eat Korean Barbecue. In Japan. Korean Barbecue. I would love to eat some Japanese sushi in Japan, but I have yet to find any. In fact, the only sushi I’ve seen and had was on the plane coming here. 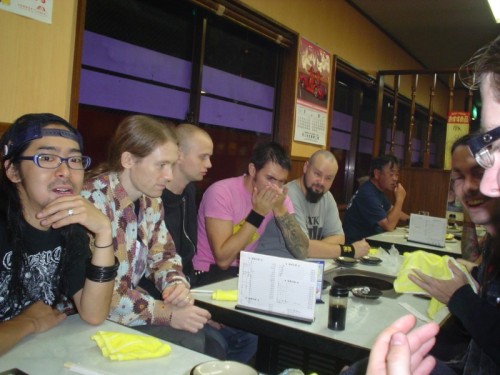 Our friend Micah was with us. He’s a transplant to Tokyo via Minnesota. If you’ve never heard Japanese spoken with a Minnesotan accent, you haven’t lived. Or perhaps you have, and my experiences are small and insignificant.

We were fairly drunk by the time we made it back to Nahru’s parent’s house. I apparently passed out mid-sentence while explaining I didn’t have any jet lag. Jason and Raul went to bed while Sean soldiered on with the Swedes drinking their weird Swedish mix of vodka and licorice candy. It was a night he would regret.

The next morning I woke up and in some kind of haze I thought it was 9 o’clock. I went for a walk through the winding streets of this Tokyo suburb in the rain. Nothing was open. There was nothing going on. A cup of coffee was nowhere to be found. After getting soaked to the bone, I went back to Naru’s to find a still drunk Sean freshly awakened, and to find out I had been walking since about 6:45 in the morning. We headed out again, found a shop, and came back to find everyone awake, wondering where the hell we were, and with the vans fully packed and ready to go. Woops. 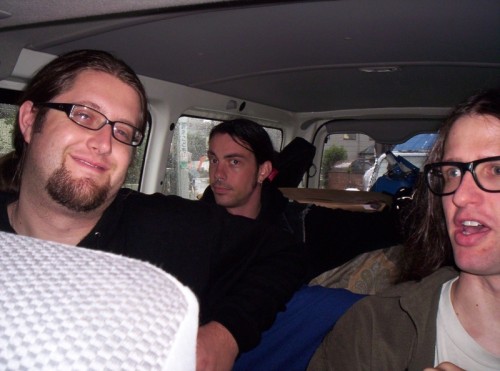 The miracle of Japanese engineering apparently does not extend to the ergonomic comforts of the seating in their vehicles. That, or this van was designed by Donald Rumsfeld to keep us in the “stress” position. After a few hours in the car, I confessed to multiple terrorist plots. It was a very torturous ride to Nagoya. 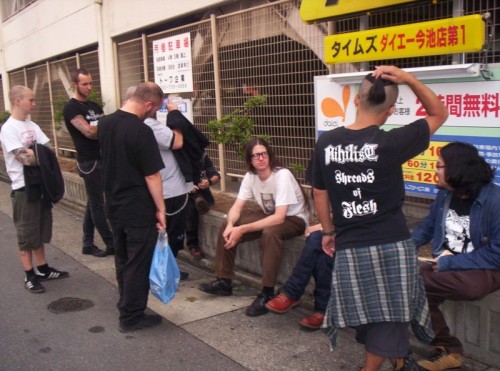 Once in Nagoya, we got to do… pretty much nothing. We sat around, not being able to go anywhere or do anything. Banks did not take our cards, so getting money was nigh impossible. Traveling tip super fun #1: bring lots of cash to exchange at the airport. ATMs here hate you. I keep asking about toy shops, which I always imagined was about 50% of Japan’s economy (right after Godzilla films) and apparently they do not exist. I haven’t seen one. Nor any giant robots. Nor oversized lizards or colorfully clad costumed heroes with giant transforming vehicles. This trip is a real bust on the robot front.

We checked in to a hostel. We should have tried checking into a hostile, where they yell at you to go up to your room and punch you for not taking your shoes off. Sean passed out looking worse than a rotten piece of sashimi. The rest of us went to this club for the “pre-tour party.” This is still a concept I don’t get at all. First off, this is three shows… seems more like a friendly “jaunt” than a tour. Secondly, a party? Why aren’t we just playing a show? Instead, we set up our merch and watched cover bands play. We actually sold stuff, too, and made some new friends. Different, but okay. That, I finally saw a fifteen foot statue of Ultraman outside a television building, so that made my evening.

After the show we headed to a Chinese place to eat. In Japan. Chinese food in Japan. I’m not sure the Japanese have food of their own. I’m pretty sure that sushi was actually invented in Texas, like the burrito. They served womb to the meat eaters, which was heartily ate, until it was discovered to be boiled womb.

This morning, Sean is about and awake again, and we’ve walked around for hours. No toy stores, not much of anything. It’s just city. There’s no public park spaces, and all the buildings have that generic 1960-70s look like an episode of Quincy, M.D. If you like convenience stores like Circle K and 7-11, you’ve got it made here. I think I’m going to move here and introduce the idea of the inconvenience store, where everything is placed on a stop shelf at just about 9′ high, so it’s all out of reach. You gotta work for it mother fuckers.

Stop the presses. Sean just spotted a woman in a kimono. We are in Japan.