At Reggie’s, we and Night Demon got to finally try out our own wall of sound (apologies to Phil Spector, that fucking murdering pile of shit). We put all our cabs on stage and gave Jucifer a run for the money.

There was also some good opening acts to check out, Discarnate and Texas Toast Chainsaw Massacre. I honestly wrote off TTCM as going to suck due to the goofy name, but they surprised the hell out of me with how fun they were and how head banging the riffs ended up. We bedded for the night and I got up early for a long overdue oil change on the van.

That would not save the van, however. We made it to Kansas City okay, had a good show with our friends in Troglodyte (especially for a Monday), but then a half block from the house we were staying at, the van broke down. Are you fucking kidding me? No, me, I am not. The next morning we had a mechanic come out and check it out, but it was beyond his means to fix. Every mechanic in town was booked, but the Chevy dealer had time, so we limped our van over there with the heat on, stopping every once in awhile for the engine to cool down. Luckily, it was a day off, so we didn’t miss another show. Another water pump dead, but we got on the road and drove all night to Grand Junction. 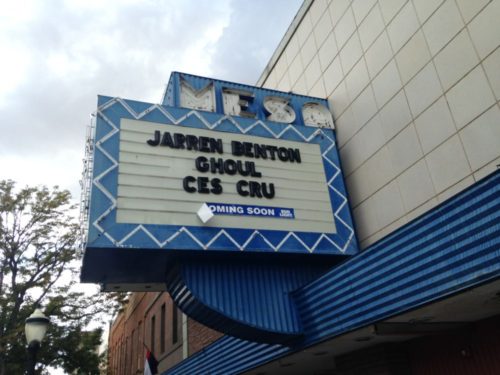 I was a bit surprised to drive up and see this was the venue we had played with GWAR and Municipal Waste. How as our little band going to fill this place up? Answer: we didn’t. I would call this another missed opportunity for a booking, and having this place finalized only two weeks before we showed up didn’t help. At all. Still, the people who did show up moshed like crazy, and even with dwindling tee shirt sizes, we still managed to gather enough dosh that the night wasn’t a total wash-out.

It was our first night without Dave, as well, which sucked. He had to get back to work so I was really missing out on his constant optimism. But Zack, who was doing lights and merch for Night Demon, ably filled in on Dave’s parts and we couldn’t have done it without him. And he hit me over the head less hard. Cheers!

I have never driven the I-70 west out of Colorado, but holy shit, how beautiful the countryside was. It was another tour highlight to follow the Colorado river out of the state and see the amazing landscapes. We stopped in a small mountain town and saw so many rich white people wearing North Face fleece vests that I had to puke.

Las Vegas was our next stop. We pulled the van into a parking garage right off of Fremont Street and were a little aghast at the club we were playing. It was huge. I thought for sure it was going to suck and that we were wasting the exuberant staff’s time. Sure, it was fun playing right on this dumb strip and taking in the gaudy sights of Vegas, but I really didn’t think this was the right place for us. And during the two pay-to-play openers, my fears were being confirmed. No one was there. But as Night Demon began, the place filled up and were super-charged with energy by the always enthusiastic Jarvis Leatherbee. By the time our set was on, the growing crowd was moshing galore and ready to get spewed on. My fears were unfounded and we had a great time. 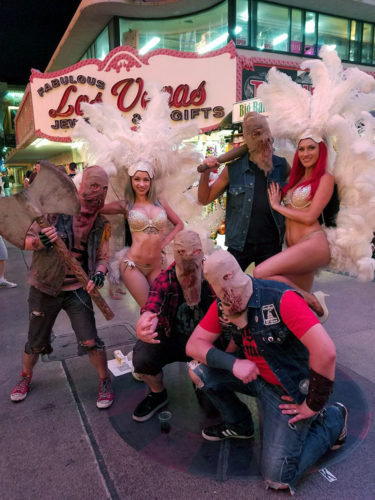 Night Demon hooked us up with a bud and we got a very cheap hotel that really re-energized us. Well, those of us that didn’t party all night. Like No-Fun-Ross. We had the day off and started our journey home. By the time we got to the Bay Area, it was like tour was over. Was there really just ONE MORE SHOW to do? Fuuuuck… 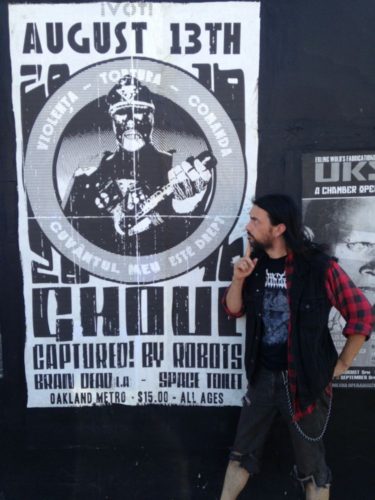 Sean and Ben had taken the van and trailer back to San Francisco with them, and guess what? The fucking trailer got a flat. Okay, this wasn’t the worst problem and it was fixed quickly. But it was like pepper and spice on our ongoing vehicle curse. We still got the show going, and what a show it was. It was nice to actually curate for once, and we had a stellar line-up of friends to play with: Night Demon, Space Toilet, Braindead, and the biggest surprise of the evening, Captured! By Robots! We first played with Captured! back in 2004, and we BLEW CHUNKS. It was nice to get another shot with J-Bot and his robot crew of musicians. I had no idea what they’d been working on after not playing for so long, nor did anyone else. But they killed it. I mean, KILLED IT. Witness for yourself.

Everyone had a great show. The Metro is such a fun place to play and a Bay Area treasure. It’s like a punk warehouse party, but in a real venue. It was the perfect ending for a (despite vehicle problems) perfect tour. We’re so much closer to our new pals in Night Demon, we had a blast with each other and with all the show goers across the country… and now I’m late for work as I polish off this post. FUCK! Real life can suck it.