Another day off (sigh) and two days travel from Rotterdam to Berlin. Impaled was going to get some more mandatory sightseeing. First, while still in the Netherlands, we drove to ‘s-Hertogenbosch, or Den Bosch, the birthplace of Hieronymus Bosch, a most epic painter. It’s a quaint little town in the Netherlands. We’d wanted to visit the museum, but like all things in Europe, it’s closed directly when you want to get in. Apparently, all museums and music gear shops close on Mondays. When I asked about it once, I was stared at like a madman: of COURSE all music gear shops are closed on Monday. What a fool I am. At least we saw the statue dedicated to Bosch in the city square. 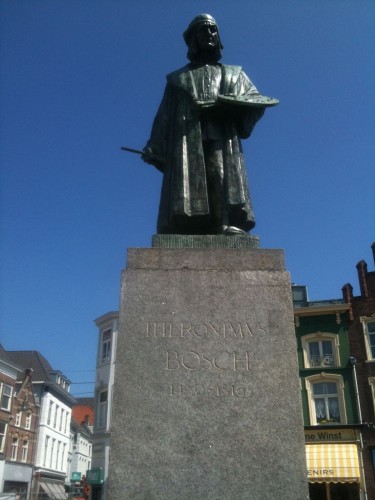 We also visited St. John’s Cathedral. It was nice, and then Povey got on the live mic in the back altar and said, “testicle,” for the whole cathedral to hear. It’s one of those moritfying moments that you then have to high-five the mortifier for having the balls to do.

We had to share some real pommes friites in a paper wrap with a gob of mayo just plopped on top. My fave. 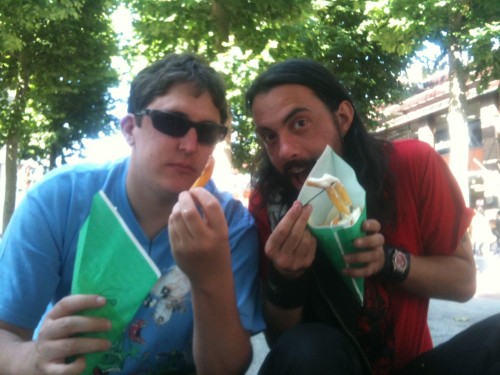 Conny and Sean had mapped a good halfway point for our trip to Berlin: Wewelsburg, to see the famous castle there. Conny bought a BBQ, and we headed. It being the 4th of July, I wanted to attempt my best to celebrate the day a bunch of rich, white, male landowners gained their freedom from England. 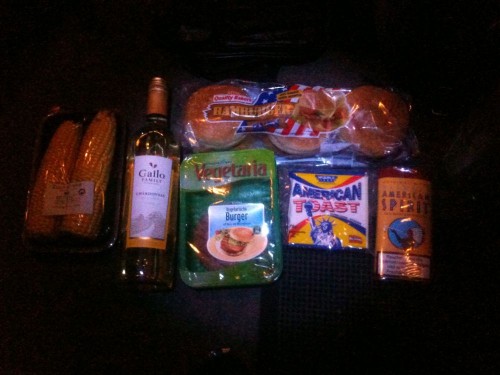 That’s some corn, a California wine, American style hamburger buns, a veggie burger, American “Toast” cheese, and a package of American Spirit tobacco. It’s the best I could do here in Deutschland. Happy 4th! 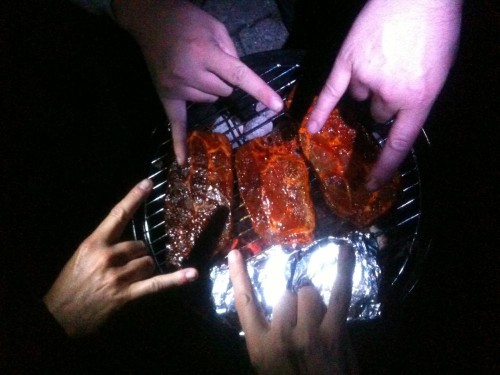 We luckily found a grillhütte outside directly on the road out of Wewelsburg on Schokamp road. Basically, it’s a public roofed picnic table. It was behind a copse of trees and had parking for the van. Okay, there was one little pile of what may have been human feces, but it was basically a nice little place to camp out. 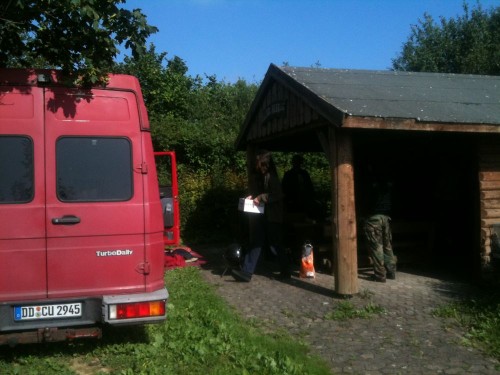 The next morning we headed to Wewelsburg Castle, which might as well be called Evilburg castle. The only reason it’s standing at all after decaying for a few hundred years is because Heinrich Himmler, Reichsführer of the Nazi SS, had the local concentration camp prisoners rebuild it for him in the 1940s. Interesting in and of itself as a rare, triangularly laid-out castle, most of it is like a nice musueum of life in middle ages. That part you have to pay for. 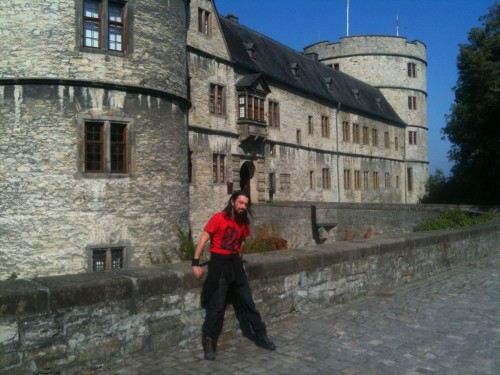 Then there’s the offset building about the horrors of the SS. This building exits to the castle moat grounds and then to the scary crypt room and the Obergruppenführersaal room. This is where the famous Schwarze Sonne, or black sun design made for the SS is embedded in the floor. You know, the design NSBM bands put on their releases to show that they, too, are assholes. 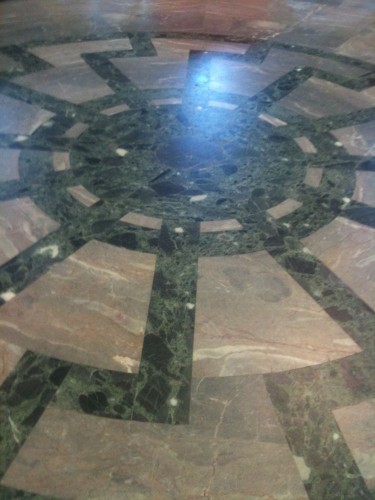 A lot of weird folk like occultists and Neo-Nazis like to attribute a mysticism to this place, the rooms, and the symbolism. It’s all horse shit. Himmler just made all this crap up, like a kid (a very fucked up genocidal one) writing his first comic book. The sun wheel design means fuck all once you place big orange bean bags on it for museum visitors to sit on and read some literature. Still, it’s a heavy place, and that’s why they ask no photos be taken in those rooms. Too bad Jason didn’t see the sign when entering the crypt. When he whipped out his camera, a booming German voice came over the PA like some kinda of Nazi ghost in the crypt, yelled at us, and we ran away like little girls.

Sightseeing was done, and we finally got to Berlin and K17, a place we’d played a couple times before. I was looking forward to a dinner from Monique, one of the organizers here. She is renowned by bands worldwide as a fantastic cook. She did not disappoint, with a meat loaf I’m told was one of the best ever, and mashed potatoes, fried cheese, veggies, and eggs that were to die for.

We were basically told that this was a bad night for shows in Berlin. Actually, I’m told that about every night in Berlin. One fella was asking why we didn’t come on a Saturday. Well, once we can get 7 Saturdays in a week, maybe we can tour properly. I was a bit worried about the show after talk like that. I needn’t have been.

They put us in the big room, and it filled out nicely with folks. Openers Harm and Genital Putrefaction were both good, old school Swedish style death metal. I especially enjoyed Harm’s singer playing a cross he’d been holding upside down like a guitar during one solo. I spoke with Harm’s guitar player, and sure enough he is well schooled on the Boss HM-2 heavy metal guitar pedal as the backbone of “the” Swedish tone.

Our set went nicely, with rows of headbangers and at least one kid mouthing the words of our songs at me with better recollection than I have. I was super stoked to have such a good time for our first ever headlining set in Berlin. If anything, the night was too short and too many friends were there for me to get good face time with ’em all.