I played music on an aircraft carrier. How many people can say that? Okay, probably a bunch of enlisted men from the music corps., maybe some kids from a chorale group or something… but I play in a death metal band. And I played in the same halls that were once bombed and sent off bombers to war. There’s something in the left over bits of me that played with G.I. Joes as a kid that is really excited by that. No, we didn’t play on the U.S.S. Flagg, but even cooler, we played on the Bay Area’s own piece of naval memorabilia, the U.S.S. Hornet. 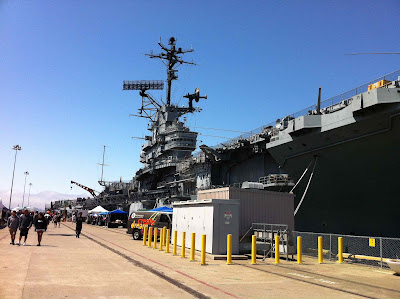 Yes, this stalwart steel lady battled in WW2, served in Korea and Vietnam, and famously recovered the astronauts of Apollo 11 from the first moon landing. And we were about to completely denigrate that proud naval history by swilling beer and playing heavy metal in her hull. That’s what it is to be an American.

The organizers of Slaughter by the Water thought for their third festival they should do something novel; that is, make the name irrelevant by holding the fest ON the water. It was an interesting choice, at least enough to entice Impaled to agree to play and see what the shit show would be like. We had also used the U.S.S. Hornet before, as a back drop for Sean’s solo in the video of our song “G.O.R.E.”

We were scheduled to play around 7 PM. Our load-in time was 10 AM. What the fuck? Well, in order to avoid the impossible task of carrying our gear up the gang plank, we had to be early to make use of the crane and the cherry picker to get stuff inside the massive ship. Most of the back line went in the cargo holder, our stuff was less ceremoniously lifted on the cherry picker. 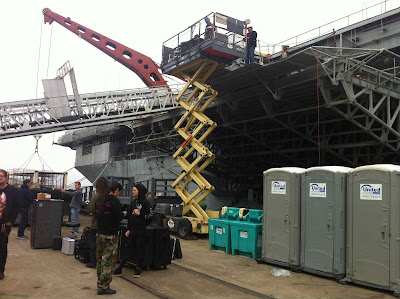 There was lots of support staff about and lots of veterans volunteering at the Hornet helping. I can only imagine these guys dealing with a bunch of slacking musicians, remembering how they ate dirt to shit freedom… for this: a bunch of gear made to fight the system, overshadowed by gear made to fight and defend the system that makes the former possible. 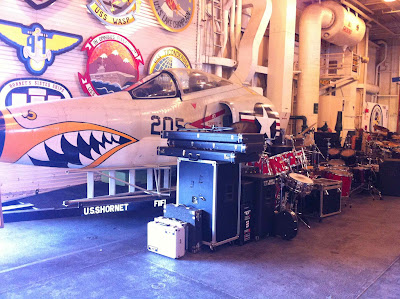 All I can say about this is… hardly. 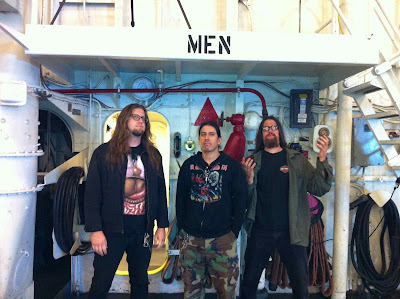 Slaughter by the Water officially started around noon. There was a stage outdoors that was free to all, though I think the families walking by going to the U.S.S. Hornet were a little less than impressed. Well, they could go and enjoy one of the multitude of food stands that normally wouldn’t have been there and eat some funnel cake to shut up their stinkin’ pie holes. 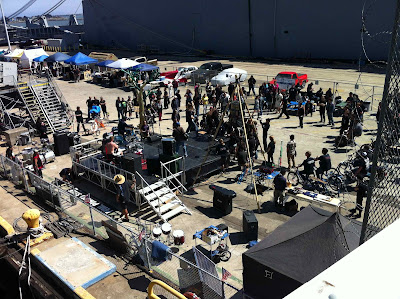 The power for the outdoor stage was from bicycles. Are you kidding me? No, Ross, I’m not. It was a clever set up, but not so clever as to recognize the inherent laziness of metal heads. You needed about 10-15 people on these bikes pushing transformers to get up enough power for a couple amps. This might’ve worked great at Outside Lands or at Burning Man, with some dude and his Fender Twin. Throw up an SVT or a Triple Rec and you’re running into problems: the fifty or so times bands had to restart their songs. Whatever, I did my part… for about five minutes. 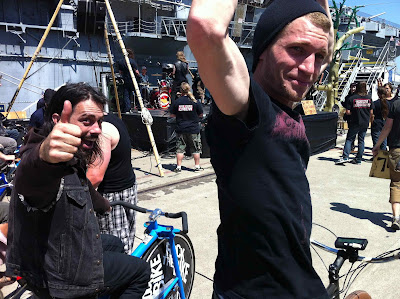 A good number of bands played outside. There was enough metal to attract the Jesus freaks. Really? Don’t you have some gay military funeral to protest vainly? Somehow, I don’t think coming to a performance by slackers is going to win or lose you anything… except maybe an afternoon of your time. It’s fairly obvious that we’ll never give a rat’s ass about your son of man, save for His excellent hair. 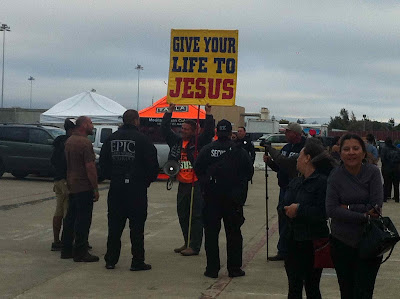 I alternated between watching and exploring the vast aircraft carrier. I work within a stone’s throw of the thing, but I’d never gone inside. The U.S.S. Hornet is a great museum, carrying vintage helicopters and jets within its hold, test equipment for the Apollo missions, freedom to roam many of the corridors lined with information, and even a ghost tour. I wouldn’t buy into those things personally, until I’m standing right by a test Apollo capsule and I’m told to hush up because Neil Armstrong, first man on the moon, has just passed. Eerie. Godspeed, American hero. 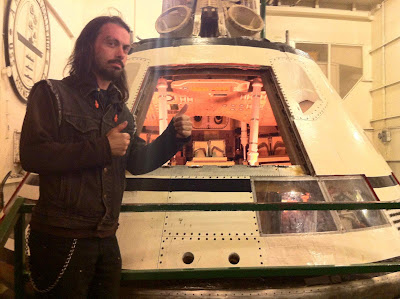 At least we still have Buzz Aldrin. That mutha fucka will punch a man in the face for claiming the Apollo missions were faked. Such is the fate deserved by any ignorant disparager of the incredible work, talent and bravery involved in America’s moon landing. The same goes for people who believe humans couldn’t have built the pyramids without help from aliens. Seriously, folks… ancient people were BORED. What else to do but stack some boulders to the sky when you don’t have great shit around to watch like America’s Got Talent or NCIS: CSI: SVU.

Around five, the most important moment of the day arrived: the families were kicked out and the bar opened. The bar was positioned on the airplane elevator that would lift jets from the hull up to the flight deck. You wouldn’t think it would have any problems, until later in the evening when it was evacuated temporarily because it was sinking a bit. Sure, it can lift an F-J2 Fury Jet, but don’t expect it to hold the massive girth of metal beer bellies en masse. 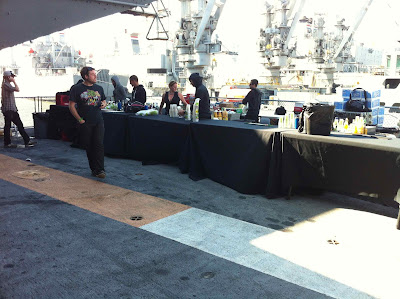 Severed Fifth opened the inside stage. It was a bit worrisome, being that the sound was being amplified within a gigantic tin tub. That said, it sounded better than I expected. They were followed with excellent sets by Fog of War, Witchaven, and Abysmal Dawn. The crowd was digging all of it, but I’m pretty sure the friendly guys in red shirts were none too stoked. I comforted myself knowing that this event was probably helping pay for the physical preservation of a naval relic, if not sullying a few veterans’ memories on the way.

We played next and it was chaos, go figure. Things were running late and we had to cut two songs. Nevertheless, we had a great time on stage and the crowd seemed to be as friendly to their father’s death metal band as always. It was almost like Impaled hadn’t completely slacked off for the last four or five years.

We were followed by Absu, who turned in an excellent set of original American black metal. These guys always destroy. That is, until they were unceremoniously unplugged. I guess things were running later than I thought. Well, a five minute bag pipe intro is bound to cut into your set time a wee bit. 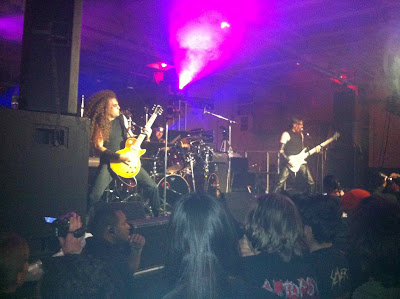 The piecemeal back line hadn’t included a bass head, so I’d lent my Ampeg V-4B to Absu and left it up there for Autopsy. I’m proud to say it sounded bad as fuck for one of my favorite death metal bands of all time. Autopsy slayed it, sounding as sick as ever. By now, things were on time and Autopsy got a full set that pleased all the tigers. 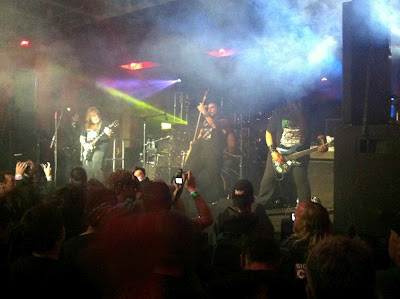 Next up was Philm. That’s when we left to go drink some beers in the parking lot. I don’t know what “novo punk” is and by God I don’t care.

Lastly, Exodus took to the stage. Expecting anything less than a stellar performance from these guys is foolhardy. The came out and ruled. The sound in the tin can was actually exceptionally good for them. Other than a few crass remarks about Neil Armstrong later followed by a string of wretched jokes to fill in some guitar fixing time, I thoroughly enjoyed their set. But boy, oh boy, was I ready to go home after 16 hours of being on that fucking boat. 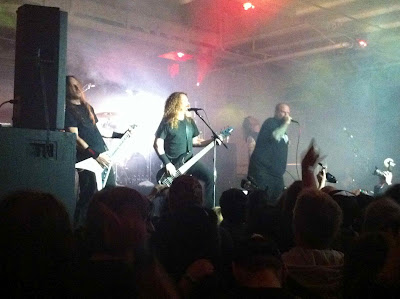 I thought Slaughter by the Water was a real success, despite the many, many hiccups it had. I’d like to see it continue on the U.S.S. Hornet. With some more experience at the same location, I could see things running smoother with the set times. Maybe they can figure out how to power a second stage with gerbils instead of metal heads. I also appreciated the special booths outside dedicated to Native American health and studies. It was weird to see such a thing next to a grand symbol of American imperialism, but a nice gesture nonetheless.

Besides, where else can you see an F-14A Tomcat like this while hearing pounding guitars… other than while watching Top Gun. R.I.P. Tony Scott, you shoulda waited a week. Your ego was writing checks your body couldn’t cash. 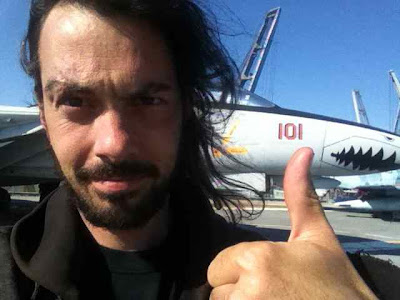