After the whirlwind of events in the past year, how fitting we should wrap up such a significant portion of our lives in a whirlwind event of a weekend. GWAR-B-Q 2012. We’d spent the better part of almost three months this past year with GWAR. Who woulda thought this little, technically unsigned, management-less project would ever go so far? With just a little heart and a lot of latex, we’d found ourselves amidst brethren we never knew we had. Richmond, VA, is rapidly becoming a second home. And a welcome one at that. 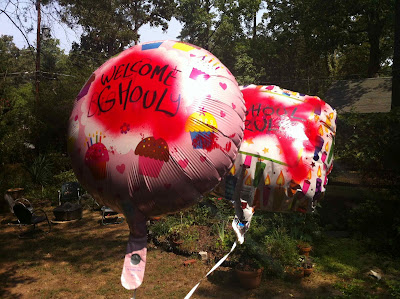 We took a red eye flight on Thursday night. I was schnockered, fitfully downing beer and shots of Maker’s Mark because our flight was delayed. The crew at Jet Blue did us fine, charging us next to nothing for all our guitars and such. The robot and the monkey had headed cheaply a few weeks earlier via Amtrak: much cheaper than posting them. We couldn’t disappoint our godfather’s in GWAR with half a show, not after all we’d been through.

GWAR had been inviting us to GWAR-B-Q for some time. Something I’ve learned is that when GWAR says something is going to happen that seems non-sensical, like going on a second tour, playing GWAR-B-Q, it’s not fantasy: it fucking happens. That kind of veracity and stalwartness are rare these days.

We were picked up from the airport by our friend, merch guy for the last tour, and co-prop master Jim Stramel. He’s the multi-talented Director behind the hit tattoo-murder move, “Degenerates Ink.” and an absolute pushover when it comes to letting us trash his abode in Richmond. Ya gotta love a sucker like that. We crashed, hungover, I mean, jet lagged as shit. It was the day before GWAR-B-Q, so the local dive, Strange Matter, had a BEFORE-B-Q show hosted by Mr. Dave Brockie. Some of us scraped our asses off Jim’s couch and made our way there. 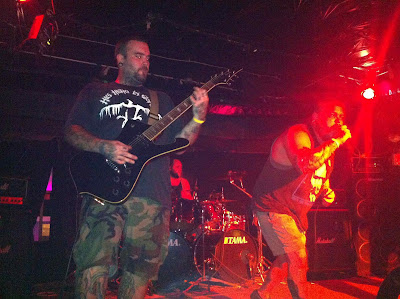 We showed up late, but managed to see our friends George and Kent play in their band Savage Attack. Stripped down Pantera and Slayer worship, the boys let out with a… savage attack. One of my favorite moments was when the vocalist said, “We’re not gonna drop names like Dave Brockie,” except ya just did. 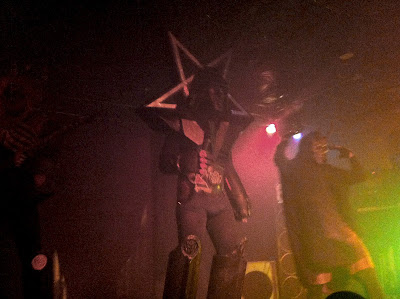 Dethrace from New York were one of the more bizarre things I’ve ever seen, a kaiju inspired… something… band. I guess death metal? Kind of. Drum machines, down tuned guitar, but gimme a break. All eyes were on the pentagram-domed front thing. With stuffed shorts. Dancing. They passed out comic books before the show, explaining their origin and what not, but does it matter? It made about as much sense as any Godzilla movie I’ve ever seen. That was the best picture I could get, because despite having such outlandish costumes, they preferred it covered in fog.

Then we had blessed sleep. We had to be at the fest at Hadad’s dirty grungy ’70s style water resort fucking early. 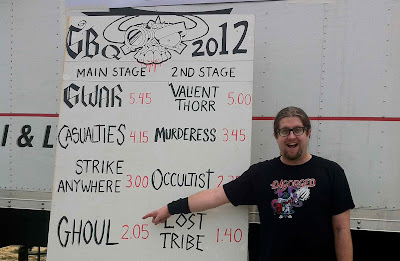 I’m not sure what Sean is pointing at. I’ve never heard of ’em. That’s my story, and I’m kind of sticking to it.

The first band of note was The Burial, Jameson aka Beefcake the Mighty’s pop-punk band. They put on a good performance early in the day and were really the first guys to get the ball rolling. I was really excited to see GWAR spew-tech, our heavy metal maniac, and good friend Germ get on stage and play some damn guit-fiddle. It was weird seeing him on stage and NOT getting beat up by a robot, but he nailed it. 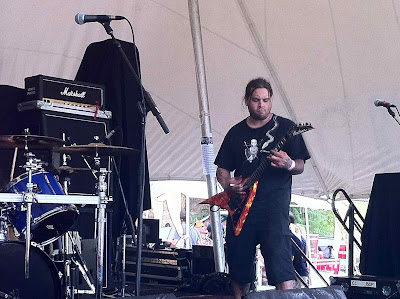 There was some weird noiseness with Mutawawa, but more exciting for me was Antietam 1862. They brought forth the Norwegian style black metal but with an American southern bent. Not in they music, per se, but Antietam is a reference to the bloodiest single battle in American history. More Americans dead than even at Normandy. It was nice to see the corpse paint, wizards, and Norsk shit put aside for a mo’. 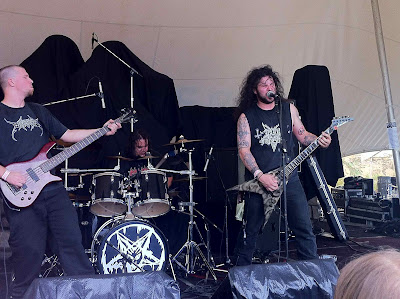 At some point around this time, GWAR was doing a meet and greet with the fans. Drummer Jizmak da Gusha apparently, as recounted to me by Beefcake the Mighty, pissed into a water bottle and told anyone who’d swill some that they’d get free beer all day. Three people partook. I’m SO SAD I missed this, said with all due sarcasm. Seriously, GWAR fans… they are another breed. Half. 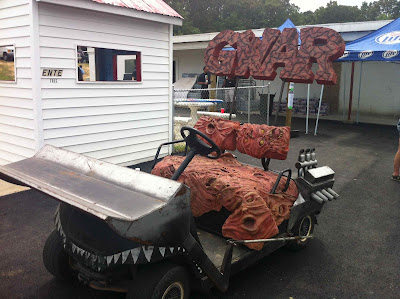 The fest really picked up as the sun came out. The tigers were having a blast in the water park, disgusting as the water was. 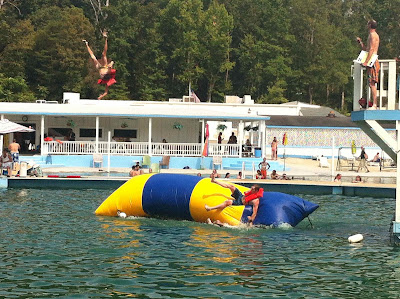 This was a man made lake. The water looked fairly nasty, especially if you count these two fools were jumping in. Our boy Scott and Steve of Whorechurch make quite the strapping pair. 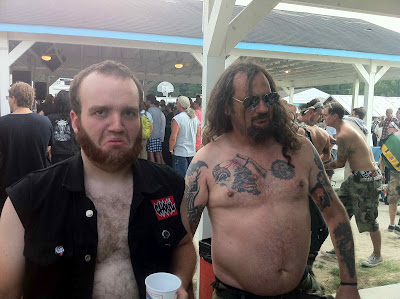 Scott, the lucky bastard, was staying behind in VA to do some work with GWAR for their upcoming tour. At least SOMEBODY in our group got something out of all of this.

We had our set time, and it was a blast. There was a late start, with some confusion as to why there were no guitar heads on stage. Luckily, we were saved by Antietam 1862. We still had to cut a song to keep our set on time. Unfortunately, no one had told Scott, and I had to yell at him while playing to get his next costume on as he sat comfortably smoking a cigarette. He thought I needed a towel. Please, that’s why God invented sleeves.

We got a lot of grief previously for ripping up a baby on stage (spoiler: it was a toy doll). This time, we smashed a box of kittens (spoiler: some fake fur and blood bags). GWAR has really helped us a lot to become the complete crowd mocking, repugnant assholes that we were meant to be.

Sadly, I missed our friends in Occultist who we’d toured with as we cleaned up our mess. The next band I got to see was our friends from Portland, Murderess. It was a lot of fun hanging out with them all day. 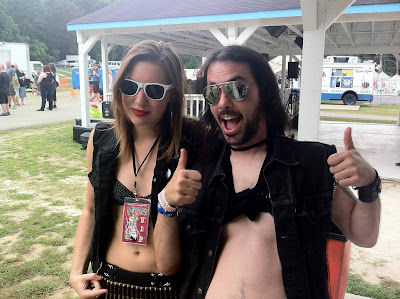 When they started playing clad in bikinis and booty shorts,, it was clear that the crowd didn’t wanna take them seriously. As the first notes started chugging, and that PDX crust-death-punk started blowing eardrums, however, it was a different story. Murderess charged forth and literally had tigers hanging from the rafters air-moshing. They rule. Murderess, I mean. The dudes in the rafters were complete retards. 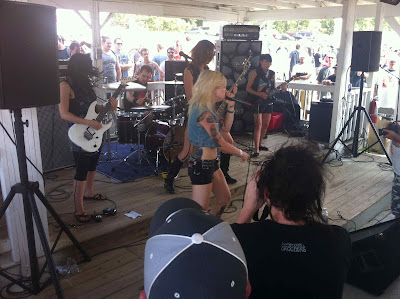 I had a bit of damper in the day when our new shirts arrived. It’s the old Splatterthrash design, but I had personally redone the separations myself for a new company. And they didn’t look good. Dino smirked at the travesty. I was a bit hurt and disappointed in myself. I was planning a blog post on how to do shirt separations, but alas, I have to go back to the drawing board. We must accept our failures and trudge onwards, otherwise we never get better. Or, just fucking give up. Washed out and crap. These suck, Ross. 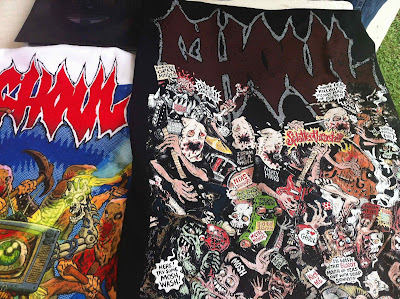 After the Casualties and Valiant Thorr, the crowd wanted one thing… GWAR. 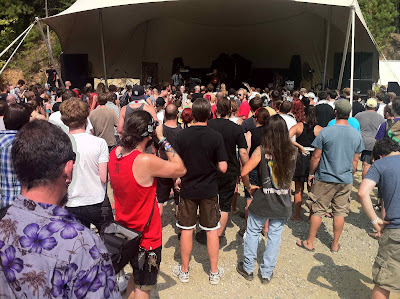 The chant was rising forth like bubbling spew from the tip of a cuttlefish. We’d seen a lot of shows touring with GWAR, but this one was special, especially for a dyed-in-the-wool old bohab like myself. The festivities were started off by the main man himself, Mr. Sleazy P. Martini. The nowadays rare appearance of GWAR’s manager is a sure sign that a carnival of chaos is headed your way. 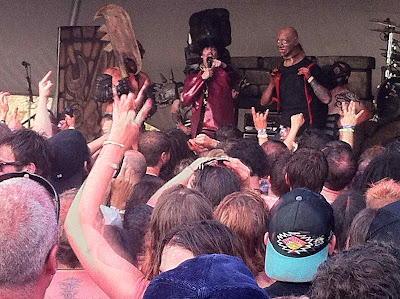 The hits didn’t end with Slaughterama, either… it went double old school with the appearance of Sexicutioner doing his own signature song. I haven’t seen this guy join his fellow scumdogs on stage since the nineties, for fuck’s sake. 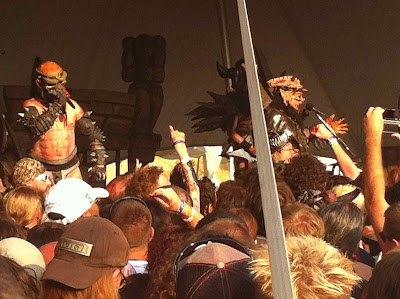 It was an amazing performance from GWAR, as always, but with a little more. I’m glad GWAR has evolved to the more tightly honed metal machine they are these days. A little bit of the TSR playing little kid in me, though, misses the old chaos: WAY too many people on stage flopping about like a bunch of half-retarded LARPers.

As with all GWAR shows, the paramedics were helping out a tiger at the end of the show, trying to figure out which blood was real and which was fake. I myself, was exhausted. Sun baked and still jet lagged, we headed out from Hadad’s, a lot of hugs to our benefactors and brethren in GWAR. This was it! The real end! Until the next time…

Some of our camp headed out to the after show back at Strange Matter to see the amazing Ratface from Pittsburgh. I’m sad I missed it, but dammit all, I was tired. I stayed in with our boy Jim and watched some movies while eating garbage and cursing our 6AM flight home.

It was a crazy weekend and the most excellent wrap up for a year with GWAR. We saw the first and last show of this tour cycle. We shared the best of times, we shared the worst of times. These boys were always in my heart as a fan, and now they’re in my heart as friends… or fiends. I can’t decide which.

Much love… right to the balls. 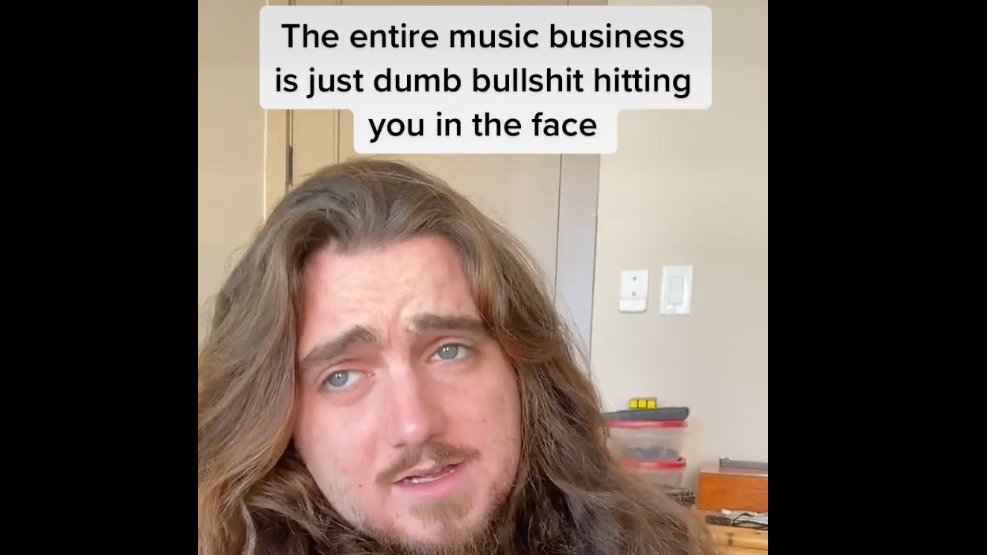