The Morley EVO-1; one of the holy grails of stupid, antiquated pedal-collecting. It’s a monster-sized beast that accomplished one tiny effect. It has… a really, really short echo. But when it came out, how fucking novel! In a world before BBD chips, in a time of oil… this is the oil can echo.

This was a broken EVO-1 that I picked up online. The base was rotten and the echo did not echo. I fixed it all up and did meticulous work photographing everything. And then my computer crashed. This was in 2014. So, it’s been awhile. In lieu of the gigantic photo essay I had planned, I’m gonna take my time and retrace my steps. If you want to know more about oil-can audio technology now, see my previous article on the Morley RWV Rotating Wah I refurbished. If you want to see a simple way to mod the circuit board to make an EVO-1 more powerful, for the 2-6 people who actually own one that works, read on!

Retracing my steps here isn’t the easiest thing in the world to do. I’ve got a schematic for the circuit board, but it doesn’t seem to match the values I found inside my EVO-1. Or maybe I’m really, really bad at tracing schematics. Both are possible. 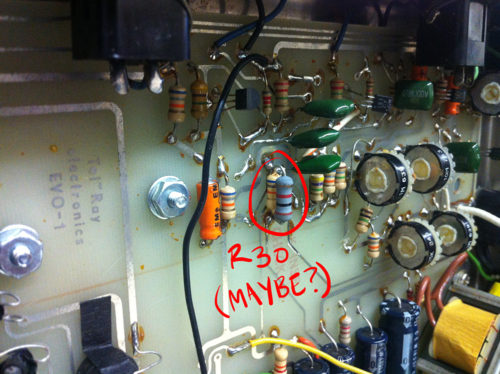 Well that looks weird. That’s because I did it. What you see is a piggybacked resistor allowing more voltage through a path. See, the EVO-1 works by sending a signal through to the spinning disc via a conductive rubber pad, which is picked up by another conductive rubber pad further down the disc. Logically, that makes only one echo, so it splits that echo with the output and sends it back to the beginning: repeated echoes. That happens here at R30 (maybe, since the value here doesn’t match the schematic). I’ve added a 1K resistor to allow more of that split signal through. It gave me a louder echo that was able to sustain longer. I came to the value of 1k through trial and error until I got a sound I liked. I used the piggyback method so I could always take it back to the OG sound; also, taking out the whole circuit board is a bitch.

Another guessing game, as I can’t find how this fits on the schematic I have. It could be Morley was constantly changing things in production. Or, again, I’m an idiot. Either way, another piggybacked resistor was attached here to the echo volume limit. This gave me greater volume on my echoes and allowed me to send this fucker into self-oscillation. Most delay pedals are designed to avoid self-oscillation, because I dunno, it could blow a speaker? And musicians are idiots (see previous self-deprecation). In any case, I felt like pushing the limit. Another 1K resistor piggybacked = MORE POWER!!!

And the proof is in the pudding… all this time and money was well spent for the nearly TEN seconds I was able to use this monstrous pedal on an actual recording! Here is the unedited take of cool swishes and echoes I had fun recording with the music going into a self-oscillating EVO-1 (with some weirdness added by an Electro-Harmonix Ring Thing):


And if you’re interested in looking at the schematic that I was barely able to make heads or tails of, you’re welcome to it.