Our crew headed out from the Bay Area and drove straight through to Indianapolis. There, we picked up our temporary home from the folks in BandWagon RV Rentals. After Crowbar gave us a tour of theirs last summer, we decided we needed to try this tour bus alternative. It’s more expensive than a van, less expensive than a bus, and you can live and (kinda) cook in the damn thing. Shower, bunks, toilet, the works.

From Indianapolis, we headed to the first show at the National in Richmond, Virginia. GWAR assured us they’d give a run through of the show so me, Sean, and Scott would know what we were doing. Just AFTER we took care of all our stuff, including counting 42 boxes of merchandise, trying on all our own props for the first time, and generally running around like chickens with our heads cut off. The walk through was… um… brief. It would take a month before I felt comfortable, with the show, but in the meantime, off to work.

At first, GWAR had this new creation called the Glombot. It was ~200 lbs. of shear hell. GWAR’s employed tech Aaron and I had the job to lift this monstrosity onto our own Scott and then watch as he nearly died every night trying to make it to the front of the stage. Impressive as it was, it was doomed. I think out of 42 shows, the damn thing made it onto stage seven times? Six? Maybe less. The frame broke and that was that. Though I don’t want to see one of my favorite bands fail in any capacity, I secretly jumped for joy that this “thing” was put into mothballs inside their semi. Just watch as Scott struggles not to die…

Dealing with all this new shit, dealing with problems back home, and dealing with all our own breaking down shit, I had a breakdown myself. For the first week or so, I was getting black-out drunk and yelling at my bandmates. I don’t remember any of it. At first it was amusing, but eventually me and Sean had to have a talk. I compartmentalized my problems, dealt with them one by one, and eventually stopped being a surly fucktard. Well, surlier than normal.

We played a bunch of shows in the North East along with Doyle and U.S. Bastards. As we neared Canada, Doyle dropped off and He Is Legend joined the tour. The He Is Legend dudes were absolutely aces to tour with, totally professional and sweet. U.S. Bastards were also a great crew, one of which (Jeremy, the drummer) we conscripted to help OUR band, because it was our most ambitious show yet and we were woefully understaffed. By the end we had 8 people in our BandWagon, one driver, and one dude from another band helping out. Even with a driver, by the time we hit Canada, we were dying. An unseasonable winter storm didn’t help.

Of course it was a lot of work, but it was also a lot of fun. Their was days off at the Mall of America to play some mini-golf, shopping at comic stores, visiting landmarks, and seeing old friends. And as much as I make it seem how hard it was for us, I’m always amazed at the amount of work GWAR accomplishes in a day, setting up their off-Broadway show REALLY far off Broadway each and every single day.

By the time we’d gotten back to middle-America, I’d had a wonderful day-off visit to my Grandpa’s grave and my family back in Oklahoma. I was in good spirits. We were all tired as fuck and hacking up mold the whole time, but the shows and costume changes became more routine and easier. I was figuring out what I could do in the GWAR show to add to the fun and chaos. Sean and I both had bits on stage with different GWAR characters we’d worked out and I even got to show off some of my dance moves.

Sadly, it was the last week where I thought our own band finally hit our stride. Props were breaking down less and less, we were spewing more blood successfully every night, and things were just more fun. Alas, all good things come to an end, including our run of vehicle luck. Typical of us, finally, we had a vehicle problem. Our BandWagon had an issue on the LAST DAY of tour, so the core musicians loaded up in a rental car while the monster guys waited for a new BandWagon. Our last show in Detroit was a minimalist effort, but I was still riding high on what we’d accomplished the whole way for ourselves and our work with GWAR. It was an incredible end to an incredible tour. 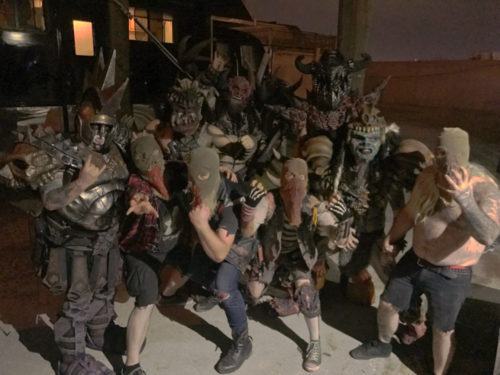 From being a little teenage puke seeing Phallus In Wonderland for the first time, GWAR has been a constant in my life, inspiring art and music in me for 25 years and going. They gave our no-name band a shot to become a national act 6 years ago, gave us a bigger shot this year, and even invited us to play with their toys, too. It was an incredible experience and I proudly sit at the foot of our lords and masters in GWAR.

2 thoughts on “I was a Middle-Aged GWAR Slave”