I am particularly excited about this character, though, because for the first time I had access to supplies to build the fucker thanks to possessing the band credit card. My first two part full over the face mask, and it worked.

I started the build with a generic male bust and plenty of WED clay. I’d done some two part casts and molds years and years ago using oil-based clay. The WED clay, named after that anti-Semitic piece of shit Walt Disney, is AMAZING. It’s water based, easy to work with, and holds lots of detail. You just gotta keep it moist while working. 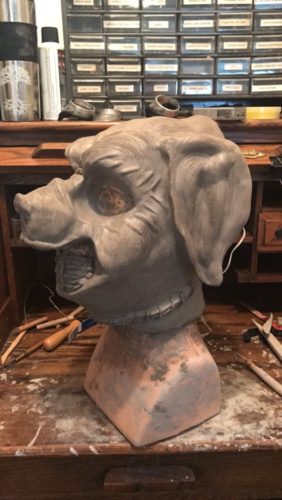 I left the eyes very large and the mouth off, because those pieces would be added later. The dog soldiers are supposed to be dog heads cut off and placed on human bodies. It’s partially inspired by an old video of Russians cutting off dogs’ heads and keeping them alive. It’s not a fun video to watch. The point is, we wanted them to look fucked up, cartoonish, and partially cybernetic. So the eyes would be a pair of old goggles I had and the mouth would be a metallic jaw. 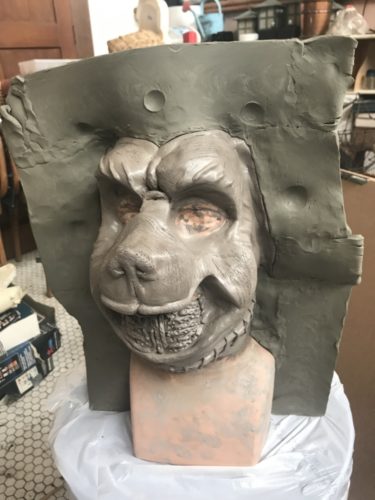 Here’s my last picture of the molding process before the nightmare began. This is the mask with a built up wall to make a two-part mold. Then I got out the Ultracal plaster. I had no fucking clue what I was doing. I mixed way too much with way too little experience and ended up with a half finished mold and a five gallon bucket filled with hardened Ultracal. Start small folks. In the meantime, the messy process did not allow me to photo document my work. SORRY!

Eventually, I did finish the mold and it came out… usable. Hey, first time in a long time. I painted in the details with latex I’d colored using small amounts of acrylic paint. Then I slushed latex in the mold probably way too many times and in a terrible manner because parts of the mask were soft when I pulled it out. Somehow (I don’t know how with all the fucking up) the mask eventually dried all the way through and came out okay. 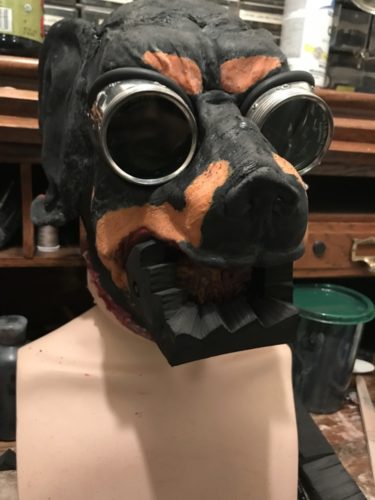 The goggles are held on with velcro. The jaw is made of EVA foam, typical for cosplayers building armor. Eventually I covered the jaw in latex mixed with silver powder to give it a metallic sheen. It would also be removable and the head plumbed for a spew effect on stage. 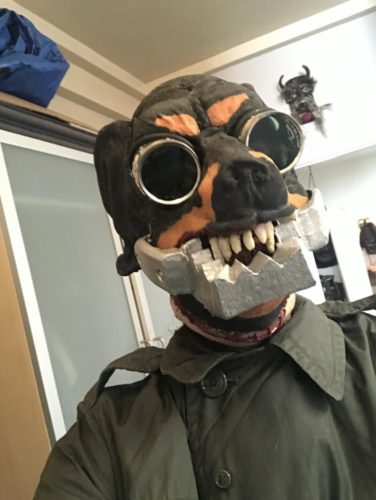 Of course, just some dude walking around with a dog head isn’t cool. But a dog-headed soldier in outlandish armor, that’ll make the girls’ panties drop. I found some old junior-sized football pads in our band’s collection of recyclables. 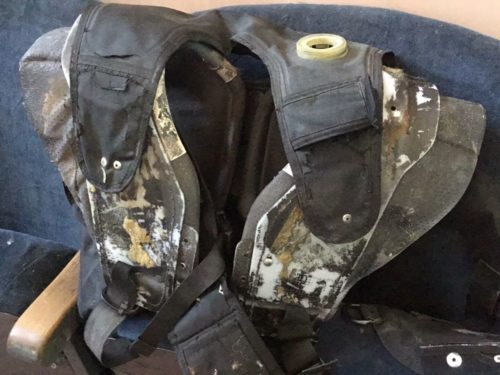 I spruced these up by riveting some hard hats over the shoulders. 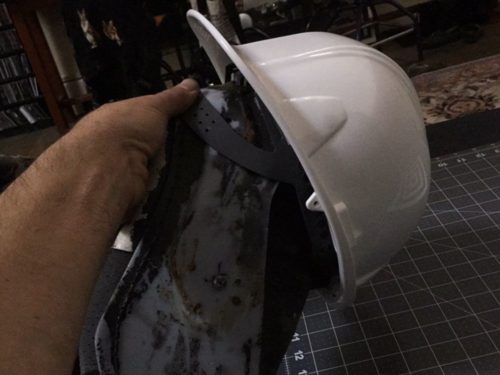 These were further disguised using pipe-insulating foam from Home Depot. 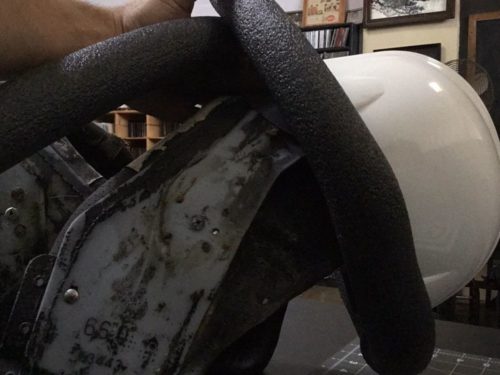 The hard hats were then coated in contact cement which was allowed to dry fully and then painted black. This worked… okay. I’m still trying to find a way to paint hard plastic that’s a bit more durable. In any case, I went to work cutting out some armored bits to cover up the worn down football pads using EVA foam. These were shaped by simply heating up the pieces with a heat gun and shaping them, then glued on with contact cement. EVA foam is rad. I riveted some buckles on, painted on some deco, and it was good to go. 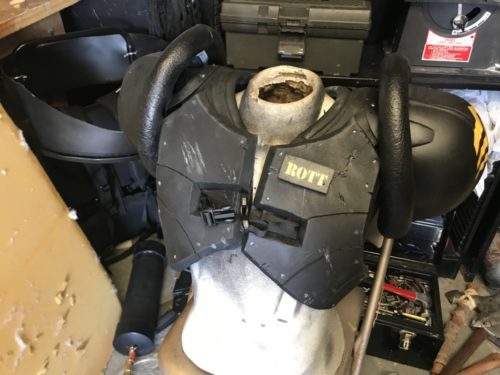 Sgt. Rott would come out with Commandant Dobrunkum and Lt. Collie night after night and menace our band. And then we would rip them apart and they would spew blood. The costume worked magnificently. I was able to look on with pride and joy as sweaty fans were left stained red in Sgt. Rott’s blood.

0
32
future juggalo rob zombie bride · 15 hours ago
@sewage666
my nephew got an award for doing well during the run, hide, defend drill 🤩 very cool world we live in https://t.co/OiX8i3TI4r
View on Twitter