My parental units are the best. We have Christmas every year with the whole family. Not a winter solstice, for we are not trying to refind our pagan roots, we celebrate Christmas with all the enthusiasm a bunch of atheists, agnostics, buddists, and lapsed Catholics can muster. This past year, my parental units asked what I wanted, and I wall wanted for Christmas was a Russian Big Muff. Sure, that sounds bad, but I meant the Russian Sovtek Big Muff Pi Version 7 fuzz pedal in the big green tank box with the tall logo. And they delivered, in damn fine condition. Fucking A. Thanks, eBay Santa. 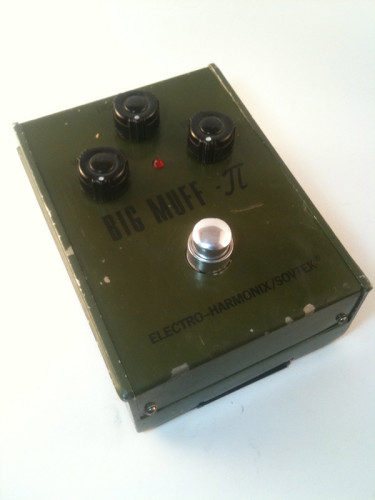 I’ve wanted one of these ever since Ludicra was playing Car Fest, and the bass player of Lullabye Arkestra fired up her’s, and I ran across the room saying, “What the FUCK was that beautiful noise?” Turned out to be this pedal. This particular model is coveted by bass players. It’s the same as any Big Muff, a classic fuzz on it’s own, but the capacitor values in the various fuzz stages differ enough from other models so that this is the one that can output the brown notes to hapless victims causing uncontrollable bowel movements. Plus, this version has that bad ass big green tank box, and that’s just cool. Yup, fashion beats function 28 days of month, as my friend Jamie puts it.

For more info on all Big Muffs, there’s an excellent resource here: http://www.kitrae.net/music/music_big_muff.html

The whole history of Mike Matthews, and Elektro Harmonix, and Sovtek is a fascinating novel in and of itself, and a topic for another day. I had other fish to fry inside this rooskie.

I was an incredibly happy boy to get my Big Muff with all the rubber feet and battery cover (so poorly designed, most are missing), but of course, happy is never happy enough. And here comes the medical malpractice. 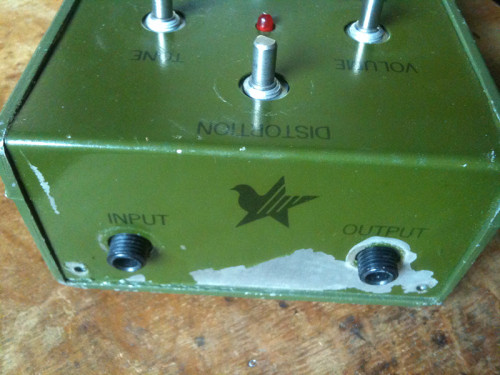 This version of the Big Muff doesn’t have a jack for an AC adapter. I’m a big proponent of NOT using batteries because 9 volts are wasteful and expensive. To it’s credit, this thing doesn’t eat batteries, but I was suffering something RG Keen (effect guru) dubbed B.U.M.S., or the blind urge to mod syndrome. Sure, I could’ve snapped together an AC adapter plug to the 9 volt battery snap, but I REALLY wanted to add the AC adapter jack. Vintage value be damned, this pedal is MINE, and NOT being sold.

It’s a simple operation, really, to add a jack to any pedal lacking one.

First, I cracked open the box. I had to be real careful with the box cover, because the paint is ridiculously cheap and flakes off at any stress. I don’t know what those Russians used, but it wasn’t good. When I think Russian manufacturing, I think Chernobyl. 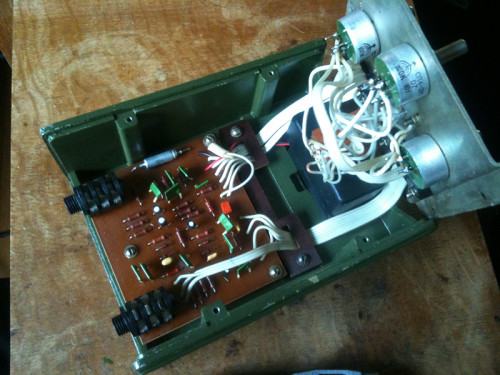 Next up, I followed the 9 volt snap leads to the inputs on the circuit board. The Russkies delightfully labeled these with a + and -, so I wouldn’t mix it up after I desoldered the wires. 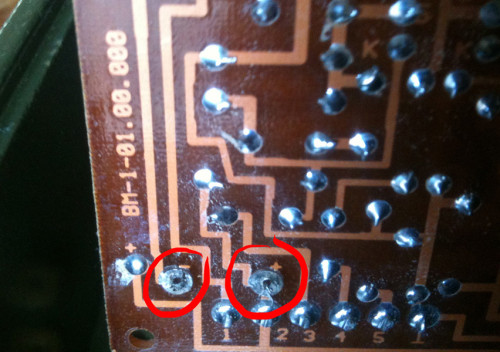 What I decided to add (and again, this is a blog about malpractice, not a complete success) was what has become the standard, a 2.1×5.5mm BOSS style adapter jack. This has become the industry standard, but… oh lord, I’ll have to rail against BOSS in another post. These kind of jacks are UNAMERICAN.

For those interested in such mundane history as to the standard kind of jacks used in effects pedals, this is an excellent link to start: http://stinkfoot.se/archives/1121

Here’s the 2.1×5.5 mm jack I got, available from most electronics shops and online. 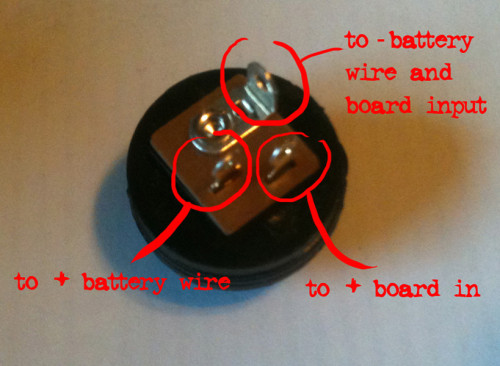 And here it is wired in… 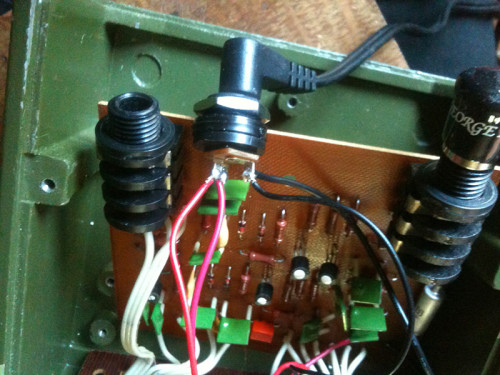 I had to drill the case in an aesthetically pleasing and functional place, and there’s my pedal losing it’s vintage value. I’m totally fine with that, because if you really like something, you intend to keep it. And I intend to rock on this thing for a long time. 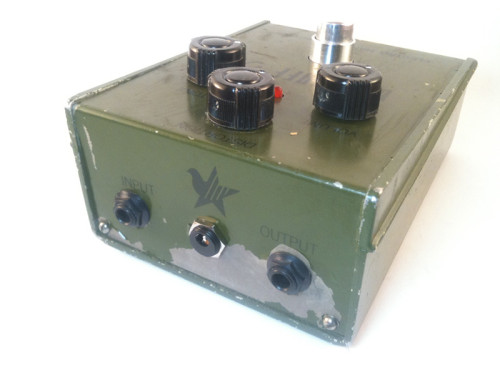 Here’s the caveat and the malpractice… I took this pedal to Europe with me and at some point in my pedal case, the damn thing got slammed around and the jack got broken by the plug pushing in. I’ve already replaced it, but I had to go off battery power while on tour, and that was so not the point of this. So, velcro your pedals down, for one.

Secondly, while on tour in Europe, I managed to also score off eBay a matching Sovtek Small Stone Phaser, manufactured around the same period and in the same style box with the same style logo. So cute! They’re brothers! 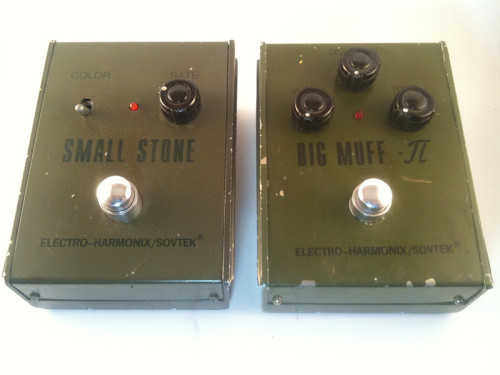 It was waiting for me when I came home. I was super stoked, and when I pulled them out to look out how cute my little matching effects were, I noticed a slight difference… 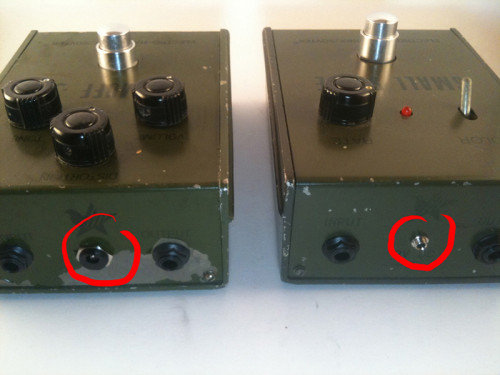 As you can see, the modded Big Muff has the barrel BOSS style jack, and the Small Stone has the older style 3/8″ jack that is standard for Electro Harmonix pedals. So, not only did I unvintage my collectable pedal, but I drilled a way big hole for a plastic jack that broke and didn’t match the style the company ended up using. So… not so cute. And I’m pretty sure the 3/8″ style jack would’ve survived the abuse in my pedal case as it was transported around.

It’s not a big deal, of course. The pedal is the same overbearing fuzz monster it always was. However, had I known, and there was some amazing blog being written by a virtual genius who would post pictures like this, I might’ve done things differently with my jack choice.

Or, I could’ve gotten a battery clip to jack converter like this one offered at Visual Sounds: http://www.visualsound.net/index.php/products/pedal_power_supplies/battery_clip_convertor. That way, I could’ve kept the pedal exactly as it was, thereby saving resale value for when I eventually get hooked on heroin and have to sell all my music gear, and those of my friends, so I can ride that fucking snake.