This last weekend, I was helping my wife out taking some band photos of our friends’ band, Serpent Crown. At one point I hoisted her on my shoulders to try for a bird’s eye view. I was reminded of seven years previous, going through some similar extreme measures to get photographs for Ludicra’s The Tenant. I wasn’t blogging at the time, stupidly, so here’s a Throwback Thursday post about this cover.

At the time this came out in 2009, some people commented “why did they photoshop a dumb door onto the water?” Well, fuck you. First, don’t use a product name as a verb in a sentence. Second, Photoshop was not involved in editing this door into a body of water. It was me and my own damn two hands what did the work putting a real door into a real body of water.

For the art on this record, I wanted to use the lyrical themes and juxtapose the trappings of an urban environment with that of the natural world humans eschewed. I also thought it would poke some fun at all the Cascadian-type black metal love of boring nature photos for album covers. Ludicra wasn’t a piss take on black metal, per se, but our band certainly had a snide nature to it.

I did some many test shots and a lot of scouting to hone in on the thematic elements for the art. On one scout, near the Aquatic Park in Berkeley, I was even propositioned around the percolation ponds that are notorious for anonymous gay encounters. I braved it all! Just so I could stick a window frame into some trees.

I got a lot of strange looks from random hikers. It’s not often a guy comes through a state park pushing a hand truck loaded with salvaged furniture.

These first shots were getting the idea through, but it wasn’t until I scouted a local former landfill, the Albany Bulb, that I got the real inspiration going. It’s now becoming a state park, but it was still a little lawless while I worked on this project. You could find artists putting up statues made of junk and homeless people living there who offered you hardboiled eggs. Yes, I ate them, and they were delicious.

Taking pictures on the Bay for an album ostensibly about living in the Bay Area really appealed to me. The Bay water, however, left much to be desired. With waves and murky depths, the colors weren’t popping quite the way I liked.

The Albany Bulb has a lagoon, though. All I had to do was turn around. 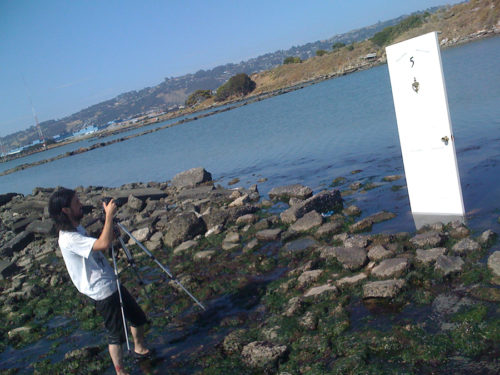 And that was it: the shot. The blue hues of the lagoon added the surrealist bent I was looking for. It reminded me even more of the great art collective Hipgnosis who bent the rules of reality with their pioneering photo artwork for record covers of the ’60s and ’70s. I’m not saying it was as good, but you know… I thought I did alright. 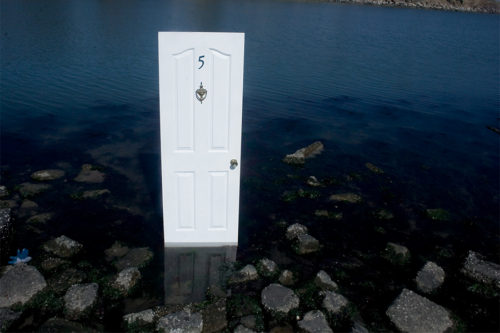 Was there no Photoshop involved? Well… I did accidentally leave some work gloves in the shot that I had to edit out. And there was that slight curvature of the dumb zoom lens I’d used. But mostly, the shot was as real as it stood.

Over the next few weeks, I carted out a bed frame, a window frame, a desk, a typewriter, chair, and a phone and plunked ’em all in the water. I had to time the sun and the tide to get each shot correct. It was a lot of work but it was probably the most close to satisfied as I’ve ever been with my art for an album.

The album itself was pretty good, too, I guess… have a listen for yourself.

3 thoughts on “Ludicra – The Tenant: Kunstwerk”