Well… I meant to keep up an intense journal over the next few days, but things are happening so fast, there aren’t “days” to keep up with! Saturday, the big day. It’s time to go record songs. I’m still sick, Christy’s sick, Keri’s not sick, but then, she’s not going to the studio with us. I have a GREAT morning…

Christy and I take off a bit early and we get to play a bit with Aesop our drummer’s awesome kid, Ezra. We head out, bagels and coffee for all (we’re such goddamn jews… recording black metal?). We get to the studio… and what happens over the next twelve hours was like, I don’t know, magic. I’ve never had such a productive day in my life. All four of us played together, with only the drums and bass having to be perfect all the way through. 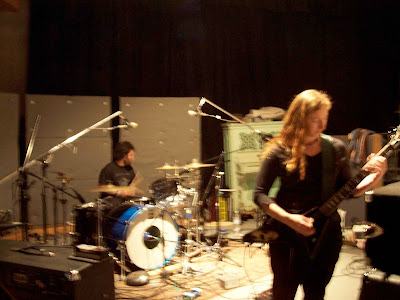 Aesop blows me away… his style is without compare, and he blasts through all the songs. Billy is a great producer to work with, easing us along, no pressure, and we’re all laughs inbetween these super dour, super emotional songs. I laughed so hard on separate occasions, my stomach cramped up. I managed to get my drink on eventually, but not to the detriment of the material (no whiskey was involved). The day goes so well, Aesop and I are fucking done! I had two more days scheduled to record, and that’s it, the rhythm section is done. And I made it through with minor punch ins on only two songs. Pretty good for the shittiest bassist in the Bay Area. 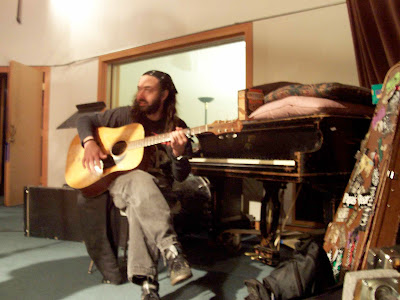 So I called John, our other guitarist, to see how day three went. Christy aced the songs on her primary overdubs and did all her second tracks as well. What the fuck? If things keep going so well, we’re gonna have to stop being so depressed. What will become of Ludicra?