Impaled has managed to stay in the same practice place for about 14 years. Holy fuck, has it been that long? Jesus Christo, I don’t think the world asked for a teenaged Impaled. Zit faced and sullen, we have more attitude than ever.

Our space is in what it locally known as “The Old Soundwave,” in that there was a “new Soundwave” started by the original owner, the legendary Al Lucchesi, with some partners. He ditched that and now he just focuses on the original Soundwave. It’s still the old one, and we’re the oldest tenants there. You can read a good article about Al here from the Easy Bay Express. The place has hosted in it’s halls Neurosis, High on Fire, Forbidden, Exodus, Testament, Faith No More, and countless others. 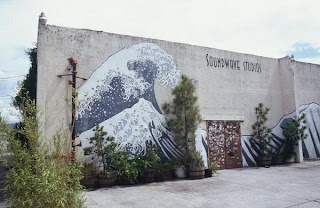 photo by Tony U., from Yelp.com

In this humble space, we’ve written all our records, recorded a couple, filmed two music videos (parts of a third), and shared our space with the likes of Blown to Bits, Morbosidad, Stormcrow, and Worm Ouroboros. So, why, oh why, did it take us more than a decade to decide to build a loft? Fucking morons.

Sean and I enlisted the help of our dear friend and sometime gore collaborator, Scott Bryan. We set to work to build a loft. Finally. We moved most of our equipment into a space that was temporarily empty, much to our benefit. To keep things easy and do it all in a day, we decided to go with it being 8′ tall, because that’s the height that 4×4 wood lumber comes in. That’s just less cutting to do, and it’s a good height to roll full stacks out from under.

Our room is at a slight angle, but basically the width is around 14′. At first, Scott was insistent that we had to put a beam right in the middle of the loft for support. I really didn’t want to. Then a neighbor came by and suggested we really didn’t have to. Instead of just using four 2x4s for the base of the loft, we should use at least one 2×12 for the front. That’s one super thick chunk of board that was terribly unlikely to bend. That’s when Scott remembered, that for once, he didn’t have to build something to code. I mean, who would it hurt to try? Just Impaled.

We were lucky enough to have one back wall made of thick gypsum, or something… I don’t know. It’s a really tough wall to even put pushpins in, so we assumed it would be good. Point is, we were lucky to not have to use drywall anchors. We put up a long 2×4 as our starting base. Of course, we kept it all level as we could. A good device that I was unfamiliar with, not being a carpenter, was a chalk line. Basically, it’s a string you pull tight from one end to another and snap it… and you get a straight line anywhere, drawn in chalk. That was way easier than trying to find a ruler 14′ long. 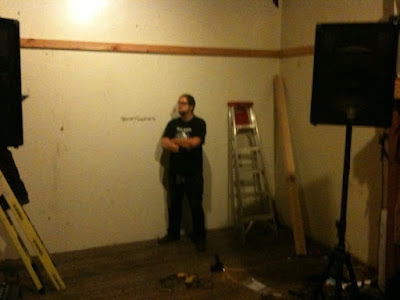 From there, we attached the side panels. We made these 4′ long, because the plywood sheets we got were 8×4′, and I wanted to do as little cutting as possible. I’m lazy. 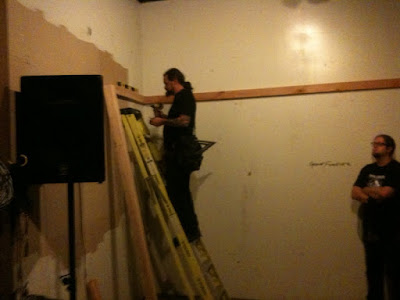 Finally the massive 2×12 board was attached. It was a pain to even get in our room, bending around the hallway and the gear that was already in the room. 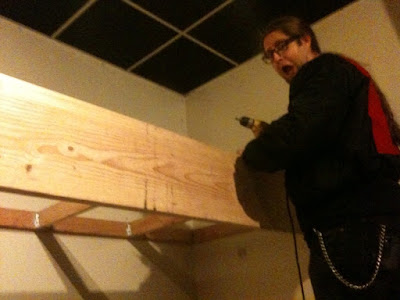 For the joists, the supports for the ply, we used joist anchors on the back beam and then screwed right into them from the front. The anchors made it a lot easier for us. We didn’t have to try and make the frame and THEN attach it to the wall. The joists were spaced about 2′ apart, because Scott told us this was standard. Hell if I know, I just know it all worked. 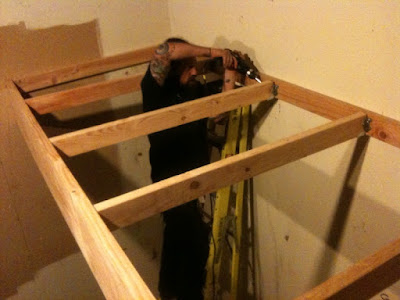 Next, we screwed in the 4×4 posts on each corner. Really, this thing was free hanging just fine, but I figured the posts would add a psychological comfort to the drummers who had to sit underneath this monstrosity. Finally, we put up two sheets of plywood, with a slight cut in one of them to match our angled wall. This thing was as solid as a poop after mac ‘n’ cheese. 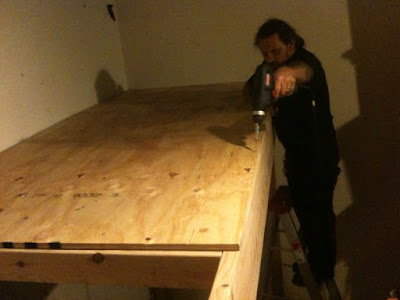 There was some bitching by the drummers about sound, so I padded the corners and under the plywood (in between each joist) with foam. That seemed to solve the problem, and now everyone is happy we have less shit all over the floor. You can imagine, after 14 years, we’ve gathered a lot of shit. 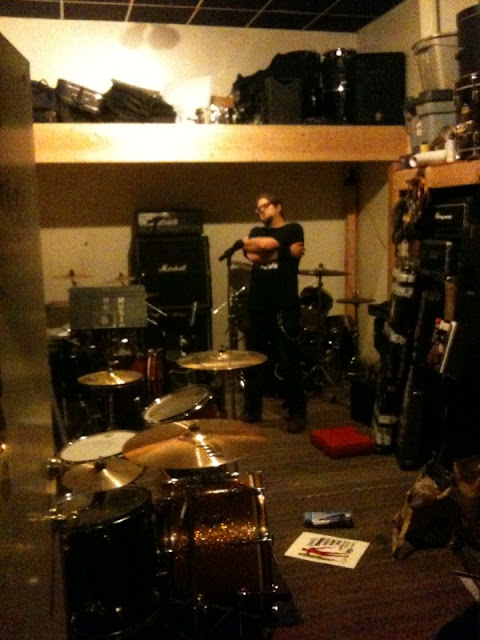 The materials cost us somewhere around $100. Priceless, when I think of how it made our space infinitely more comfortable. On top of that, it only took a day. Nice. Scott Bryan is our man. He can be contacted by any other Bay Area bands looking for a good guy for a cheap price to help them build a loft at mistermeat138@yahoo.com. Or, get off your lazy ass and give it a go yourself. You can build a small one, a big one, but if you hurt yourself, I’m gonna 1. laugh, and 2. tell you right now that I told you not to without the help of a parent or guardian.

Oh yeah… don’t forget to decorate when you get chance with stripper rope lights. It makes your music sexier. 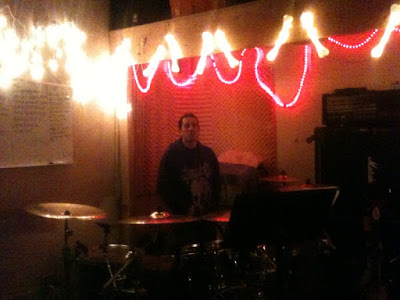