It had been almost five weeks since the end of our headlining tour. I swear, it felt like I had concrete shoes, lugging all that shit out of our practice place and back into the trailer. What the fuck? Is five weeks really that long? We was outta god damn shape. Did we really have to do this again? The metal gods commanded we play festivals in Portland and then San Francisco, and we obeyed! Ja wohl! 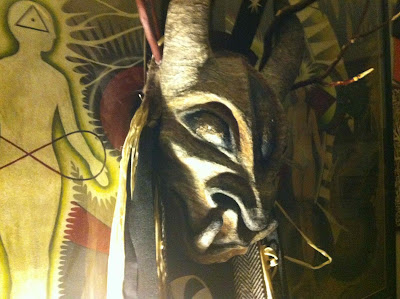 That was at our friend’s house, Emily of Ashland. She’s an insanely good tattoo artist and makes these detailed masks by reconstituting the paper of a wasp’s nest as a kind of papier-mâiché. Kinda makes throwing some latex over foam to make a robot seem trite, in comparison.

We decided to ask Emily if we could stay at her place the day before we’d play, and break up our drive to Portland into two days. That stretch of Highway 5 from the Bay Area to PDX just isn’t worth taking all the way overnight. It’s too long and too much bad mojo on that road. You can’t pass a landmark like “Jump Off Joe Creek” and not think bad thoughts. Anyway, Emily was kind and let us check out some of her awesome art, make some breakfast, and shoot arrows in her backyard. This delightful guy was lucky to be out front. He was left bereft of arrows. 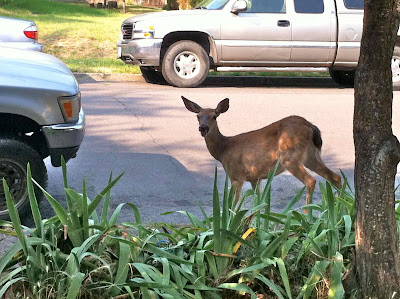 We arrived in Portland a bit earlier than necessary. Our name was in lights! We got billed above karaoke… for once. 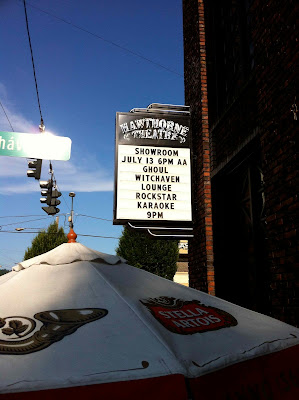 How perfectly appropriate we would be playing on Friday the 13th… KnowhutImean? 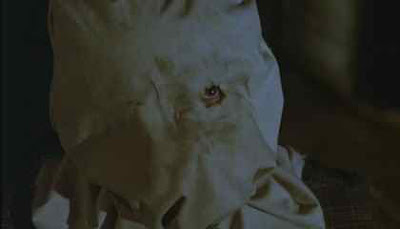 Revelations of Death was a two day fest at the Hawthorne Theater. Long time promoter and new club owner Mike Thrasher asked our old friend Jozy of Murderess to take up the reigns of booking again. She got us and Autopsy to headline the two day extravaganza. Sadly, we couldn’t stay the second day for Autopsy, Murderess and the rest, but thumbs up to our pal Jozy for getting us up here, again! 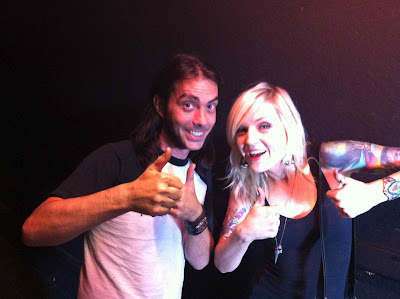 Those fucking five weeks before this had really made us lazy. Our friends in Weregoat, who were also playing, offered to lend us some cabs. At the time, I thought it was a great idea. When we arrived early and were staging items, like our amps, I immediately regretted it. Here we were, headlining, but we’re too fucking lazy to bring our own shit? I started stressing out. We have enough to do before we start playing, let alone plugging in amps and shit. Eventually, we opted to split the one guitar stack we brought so Sean and Dan could plug in, and I just had to wait. And play a cabinet that was decidedly un-Ampeg. Sad (it turned out fine). Next time, we’re bringing everything just so I can have some piece of mind.
I love when six bands all set up, one in front of the other, and it looks like a god damned NAMM showcase. 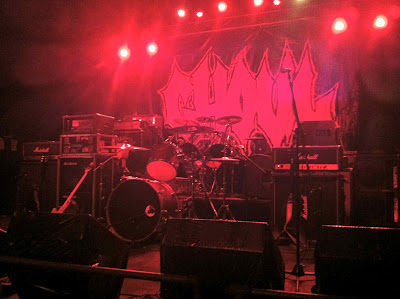 There wasn’t a lot of people when the fest started. Was it the early start time? What? I don’t know, but I much enjoyed the first band. Lord Dying was great. C’mon, folks, some times ya need to show up early, dammit. 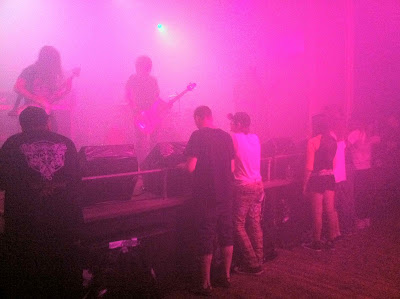 Next up was our buds in Weregoat. Not only are they face-smashing old-skool black metallers, but also quite the carpenters, too. Kevin showed me the lovely joints they’d fashioned for their decidedly evil looking microphone posts. Sometimes it takes order to create chaos. 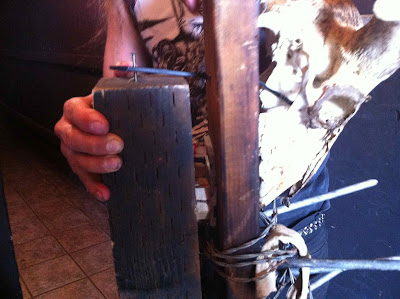 And Weregoat are quite the fashionistas, too. Just check out Kevin’s tres chic mink stole! 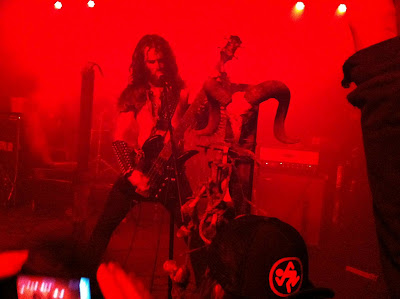 Next up was the tour package of Speed Wolf and Witchaven. I’ve enjoyed both of these bands many times before and I did again this night. Speed Wolf brought the yummy meat and potatoes metal while Witchaven nailed the thrash to the wall.
Right before us were the actual old schoolers, PDX’s own Wehrmacht. They blasted through a classic sounding set, but not without plenty of reminiscing ala a 27th year high school reunion. I couldn’t help but notice the fancy dancy custom gear. This weird plexi Fender mod with custom blue LEDs was the first thing I saw, then the cabs with switching blue LEDs. What says old school more than flashing LEDs? 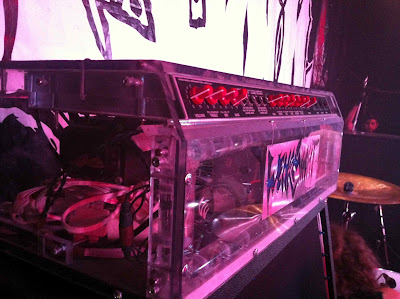 Before we went on, I felt like I’d lost my sea legs a bit. I barely knew how to set up. But once we came out, it all fell into place. Well, mostly Sean’s mic stand fell… into the crowd. I think they musta hated Sean’s vocals, because all the people attempting stage dives decided to take Sean’s microphone down with ’em.
We called a “girls only” stage dive song, and that was awesome. Apparently, the ladies like to do it in pairs. Moral support? The guys thought they could take on our robot. Seriously, though… leave the robot the fuck alone. I’m sick of having to ACTUALLY hit you. It’s a show, folks, and while we appreciate lots of enthusiasm, the show is FOR you, not WITH you. Leave the poor man behind the curtain alone. He’s fucking TIRED. 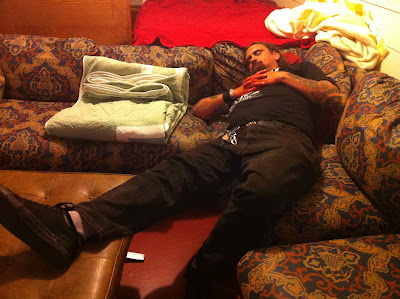 The next day, we made food errands, because we is fat kids. Portland, while being short on people who are non-young, non-white, and non-hip, is plentiful with the good food stuffs. First stop was Voodoo Donuts… the second location, ’cause fuck the tourists. A dozen wasn’t enough. We needed two. 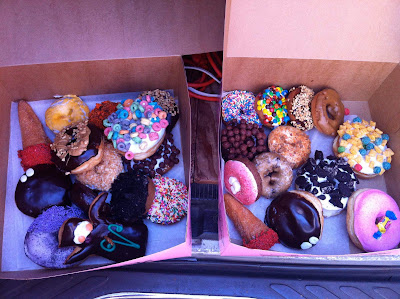 Next stop, the weird-o vegan health food store that allows us to buy cases of this. That’s just the way it is in Portland; we have turn up the ends of our mustachioes, roll up our pant leg, and be ironic just to get some of my favorite hot sauce. Why the fuck isn’t this amazing shit just at Safeways everywhere for everyone to enjoy, dammit?!? 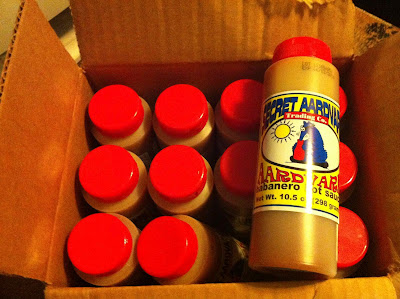 On Saturday the fourteenth, we headed back to San Francisco. The next day, we were participating in the second day of the Tidal Wave festival, a tradition in it’s 13th year. Was 13 becoming a theme? Well, it must be good luck, or something, because we had a blast. 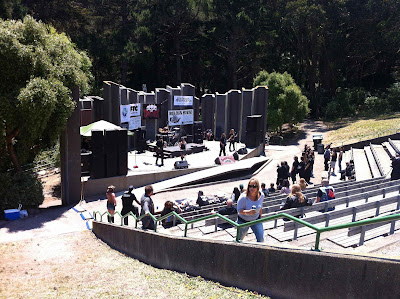 Early in the day, there weren’t that many folks about, but that’s because it was god damned 11:30 AM! It filled up later, but I couldn’t tell ya how many. We were given excellent beer from Prohibition Brewery, a local SF joint that’s just a bit over the top in regards to alcohol content. My senses were altered. Yum. 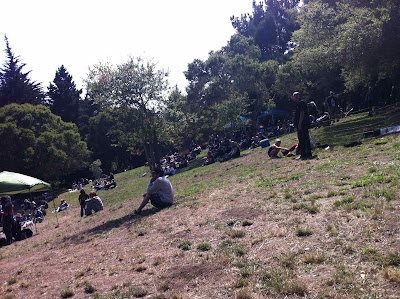 Tidal Wave is like a stay-cation in the city. It’s free, ya bring your own booze, and a mass of metal heads eventually congregate, eating and drinking merrily. The sounds of real heavy metal like Slough Feg hits your eardrums. Or these, guys, Haunted by Heroes… seriously, these little dudes are like 11 years old each and they ruled it. It makes me want to steal their lunch money and break their stupid, talented fingers.
[youtube=http://www.youtube.com/watch?v=MDG3tKMv25U?version=3]
Christy and friends in Beercraft were actually sober when they hit the stage early on and set the tone for all the day’s revelry. They jammed some folk metal dedicated to (what else) beer. Gravehill came up from L.A. to fill the quotient of Satanism required at any metal show. The Lord Weird Slough Feg did what they always do… jam it the fuck out and rule. They even have costume changes. Yeah, that’s metal as fuck.
Before we went on, the promoter Tonus had us a sign a seven-string guitar they’d been donated for a raffle. Sean signed it, “Guitar has too many strings: Defective – Return”
And then we went on at the earliest hour that Dan, Dino, Sean and me have ever made it onto stage together. Or at least, it was the most daylight we’d all seen. We jammed it out it out while the local park constabulary, or “nature pig,” as I like to call them, looked on at us… aghast. And that’s how ya do it. Piss off the old people. Oh wait… we are the old people. Well, that’s what the masks hide.
[youtube=http://www.youtube.com/watch?v=jMUQOwsG0Kk]
It was another good weekend with the boys, but that was it for now. I forgot how much shit we had and kept in the trailer, as I unpacked and watched our once mighty loft bow under all the weight. Fucking christ. Please, someone call Hoarders and let us please play in a normal band where I’m not stained red at the end of the night! 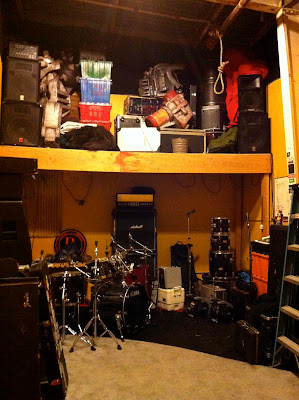