My wife is a once-a-month DJ at the Monday Metal nights at the Golden Bull in Oakland, CA. Recently having acquired a quality video projector, I thought we could gimmick her night up a bit by showing movies along with the metal. Horror movies, of course. Who needs sound when you can just watch Herbert West reanimate corpses?

The only issue was where to project the movie? They have a screen at the Golden Bull, but it faces sideways. I wanted the screen to be visible down the long room from the door to entice people (as if the tunes shouldn’t be enough). I had to build my own screen to sit on stage next to the most super hot DJ ever.

Without a clue, I did some online searching and found a wealth of tutorials. Unlike the tiny niche market of guide on how to modify a guitar pedal, it seems lots of people like to project movies and make DIY screens. The one I liked best was from the pastor who made his Christian summer camp talent show look like a rock and roll stadium event.

Really, you can stop reading now and just watch that tutorial. Should you like to see my results, continue onward…

Rear-projection was definitely the way to go for my situation, as the bar floor is taken up by a large pool table with no obviously way to mount a projector on the floor or from the ceiling. I ordered the pastor recommended frosted shower curtain for my screen. I tested it at home and it worked great to display the rear-projected image from our Epson projector.

Then I waited. And waited. And the day of the event I ran to Home Depot and cut a bunch of lengths of 3/4″ PVC tubing and, including cutting and putting grommets on every side of the screen, built the whole damn thing in about 45 minutes. We got to the bar and I began my assembly. 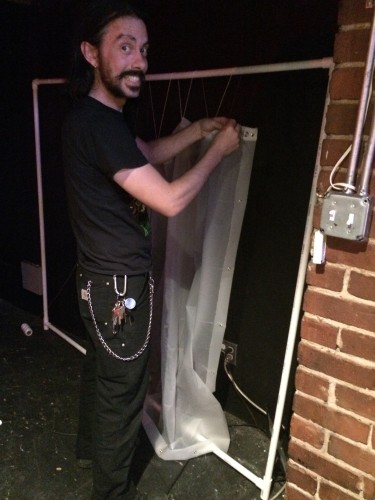 I used mason string to lace the grommets around the poles mainly because it was the first string I found while carrying around a bunch of PVC pipe at Home Depot. It worked great, the nylon being slick enough to pull the string taught all over to stretch the screen nice and tight. I laced it all around the pipes on ever side.

I attached it to some legs and set it up in next to the DJ turntables. The projector sat on a monitor behind it. When my wife’s DJ set began, I connected a laptop and played one of my favorite movies of all time.

The screen worked great. The photo is kinda shit, but it was a clear, big 6′ long projection that was visible through the entrance and into the street. Awesome! And of course, there was the awesome tunes to go with the music…

Everything held up fine, though just folding the edges of the screen over probably didn’t make them as strong as I’d hoped. I will go back and redo my hastily done grommets after I reinforce the shower curtain with some gaffer tape around the sides. Other than that, it was a great success and something we will definitely be repeating for all of D.J. Jehn.w.a.’s events.