My most recent High on Fire poster was a pretty exciting job to get. The call for a tour series went out late, so like Judge Harry Stone from Night Court, I got the call after everyone else didn’t answer the phone. Not only was this their big hometown show, but it was being held at San Francisco’s amazing Regency Ballroom. It’s a big time venue and absolutely littered with the gig posters from living legend Chuck Sperry. I wanted to do a poster that was as big and bombastic as High on Fire.

Were folks expecting another picture of a barbarian? A devil lady? Another skull with a helmet? Well, they got my poster instead: a 24×24″ pseudo-drug filled black light induced nightmare of form and function. This is not something I was able to spin out of whole cloth, but from a myriad of inspiration.

[contextly_sidebar id=”piXuFAhbJ4Vb7H0nYefkGIrtbABMlKAD”]My first plan was to do something more traditionally in line with the band’s visual aesthetic. Something warrior something sword something something. Then I started reading lead guitarist and singer Matt Pike’s latest interviews. I’ve known Matt a long time, having grown up in the same town and rehearsing music in the same buildings. He’s always been into some esoteric shit, but their latest album, Luminiferous, goes straight into tinfoil-hat territory.

“It’s not even like, wake up and smell the coffee; it’s like, dude, wake up and realize that it’s not a theory anymore – it’s a fucking conspiracy fact.” – Matt Pike to Rolling Stone, June 8, 2015 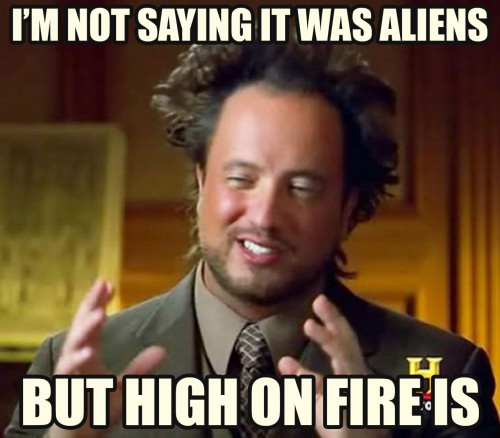 I may have a basic theoretical disagreement with Matt as to what the “facts” are, but I respect his devotion to the ideas he’s exploring. The lyrics on Luminiferous are poetically written and show keen knowledge of the referenced material. All matter of weirdness is explored, from the rogue planet Nibiru to the Pleiadian aliens. Reptoids, black plans, universally harmonious frequencies, it’s all there. It reminded me of a painting introduced to me by my bandmate, Sean. The piece is called [redacted] by [redacted], and it’s a mystery unto itself. 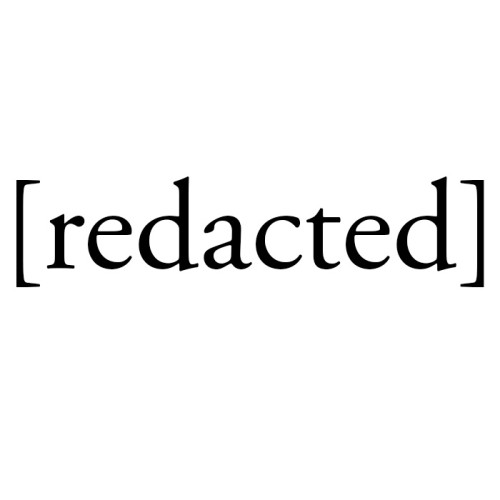 [redacted] was created in 1989 and the artist purports that the painting is alive and can release psychotronic energies to the viewer. Whatever. I’m a cynic through and through. Still, this was the kind of madness I thought would best exemplify the lyrics of Luminiferous. So I decided to pay homage to it.

The details of how I drew up my poster are pretty uninteresting… it’s entirely digital, using Adobe Illustrator, Photoshop, and Manga Studio. There’s an actual MRI of my own brain in the art and lots of pop culture references. Can you find the reference to every television show I watched as a kid while eating Frosted Flakes on a Saturday morning?

More importantly, the lyrics from Luminiferous pepper the entire poster, making this more than a gig poster but my visual interpretation of High on Fire’s latest outing. It’s fun shit to read. I hope anyone who has this poster can find diversion by exploring the nooks and crannies and figuring out how different pieces could fit together. Shit, that’s what makes conspiracy facts so damn fun to explore in the first place.

I did almost have an epic fail, though. I spent days and days drawing and then doing color separations on this poster. Sooooo many colors to separate and trap for screen printing. My brain was melting towards the end. Distracted, I made one colossal fuck up. I had printed the entire run of 100 posters and stood admiring my work. That’s when I noticed… I had misspelled the fucking album title.

How the fuck did that happen? Well, when you’re dealing with something so batshit out there with so much going on, I guess it’s easy to miss the obvious? Or, I am just dumb. I had one day till the gig. What the fuck was I gonna do? I thought about just trying to explain it away (there’s, like, we and an extra “us” in there, maaaaaan). It wasn’t going to fly. I hastily made a patch and had to screen the tiniest bit of ink over a 24×24″ poster.

Okay, so the UFO time-machine thingee now has a couple of extra antennae over some already weirdly kerned text. I actually like it better. At least, that’s what I am going to insist to myself.

I delivered the poster to the Regency and later attended the show. I also dropped off a black light for display, but it sadly wasn’t used. Hopefully people figure out it’s a black light poster, cause it looks even MORE insane when it’s glowing.

The show with Venomous Maximus, Lucifer, and Pallbearer was great. High on Fire was on point and delivered a blistering set of new and old material. It was great to see them in such a huge and historic place. 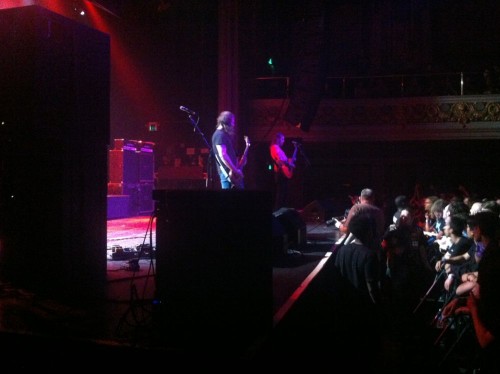 And if you want to own a piece of that awesome night, but all means, BUY THIS POSTER!! Then, put on Luminiferous, darken the incandescents, light up the black light and the pipe of your choice, and let the psychoactive energies radioed from Nibiru wash over you.

6 thoughts on “High on Fire… and probably other things, too”