From 1999 to 2011, I was in a band called Ludicra. It was a good run with four amazingly talented people. There were a lot of good times. The ending of the band wasn’t one of those good times. The feelings left behind could make one want to forget the whole endeavor. But all good things must come to an end, timely or otherwise… except the memories. Those can live on, and with music, they can live on loudly. This is what I intended. 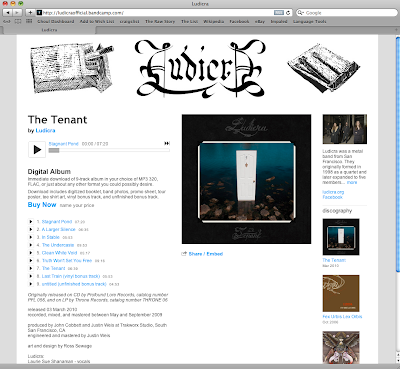 In this age of information, a picture is worth a thousand lines of code. So what’s a song worth? I spent the last few months compiling all the recordings I had packed away. With the help of some websites, some free programs, and some D.I.Y. production work, I completed the total archive of Ludicra’s output over it’s 13 year existence, downloadable and free to all.

I started a new Ludicra facebook page to replace the one that had been deleted. That was easy enough. It’s now populated with every photo I could cull from my digital and analog photo collection. Of more interest here was the archiving of the music. Fortunately, this was legally possible thanks to the wonderful labels we worked with and the music-industry-bucking, non-ass-fucking-without-lube deals they gave us. Also, shit’s outta print, so who cares.

Enter bandcamp. There are lots of music sharing sites available. Bandcamp was chosen somewhat at random, partially because it looked easy to use, and I knew it worked with facebook. I was initially confused at how to integrate it into facebook, but once I got the new bandcamp page going, the instructions were painfully easy. 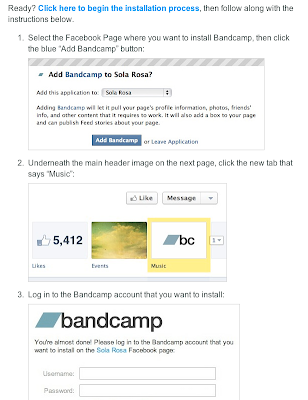 The upload process was easy, the profile was easy, everything about this was easy… except the music.

First, bandcamp requires a lossless .wav, .aif, or .flac file. For the albums, this was simple to acquire. I already had the CDs, so I just used iTunes to create new .wav versions of the CD files. If you don’t know how to do this, it’s simple. Just go to the iTunes preferences, click on “import settings” and set it to “wav” with custom settings of 44.1 kHz, 16 bit stereo. That’s the actual quality of a CD audio track and it’s what bandcamp wants. 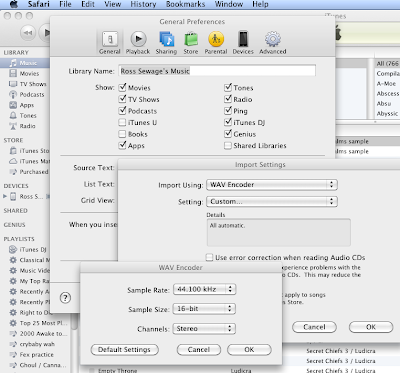 Once I had encoded all the albums from CD, uploading was a cinch. But I wanted to add some bonus tracks. I had most of the material ready in the form of CDRs with unfinished tracks, but a big ups to my man Justin at Trakworx for going above and beyond by providing me with some of the original files he mastered and mixed when Ludicra was alive.

As these were digital, not physical copies, there was the obvious lack of a booklet. This might not be a big deal to some, but to me it sucks. We put a lot of work into the interior art of every Ludicra release. Hell, I think we did some pretty revolutionary shit as far as packaging goes on a meager budget. Fortuitously, bandcamp allows for extra files to be downloaded with each album. It would have to do. I organized all the old art, including bonus photos, videos, shirt designs, etc., with Adobe Acrobat. Acrobat has a handy function to organize a digital booklet, “combine files.” Add tiffs, jpegs, or a bunch of other files and your booklet is put together for you.

Having the albums up was cool, but I wanted to put everything I had up for download. Partially, just because I thought it was cool, but also because I didn’t want to be the solitary holder of Ludicra’s aural history.

I had some old CDRs of live recordings that I’d been given. I don’t know if it was a mark of age or that some had labels glued to them, but those fuckers didn’t wanna spin for too long in my disc drive. I had to insert the disc, grab the files one at a time, eject the disc, give it a break, and then start the process over again to keep it from seizing up. Fucking irritating.

Next up… cassette recordings. Yes, kids, there was an age before one could record digitally. For Ludicra, the digital age had come, though it was anything but affordable or easy. Instead, we had a bunch of old cassette recordings before any of us had a laptop we could bring to practice. One tape in particular, live recordings with Ludicra’s first bass player Jesika Christ, I had used to practice when I first joined. This tape is 13 years old, but in some ways, was easier to work with than the CDRs I had.

I lack a cassette player at home anymore, or a stereo of any kind (curse my finances). I recorded the cassette onto a digital file at my work where we have quite a spaghetti like stereo system plugged into a computer. I used an old version of Cool Edit Pro, because that’s what was available. Some of the recordings had to be time shifted as they’d been recorded on a four-track at slow speed. Had I a cassette player at home, I would have used Audacity, a great free program that can do the same thing. 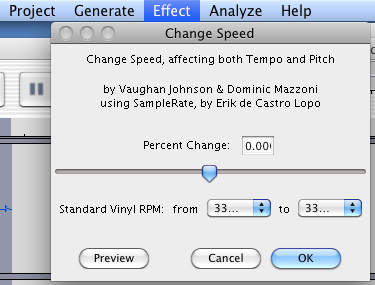 Audacity has some other important features that were integral to this project, but more on that later.

The cassette recordings were finally digitized. I also had a bunch of digital practice files from over the years. Without what one might call “standards,” you can imagine these files all had varying degrees of quality and volume. I’m no pro-audio guy, but all better for the D.I.Y. intent of this blog. Instead, I used what came with my computer: Garageband. It’s a simple program based on Logic… a program called Logic, not the philosophy of Spock. If Spock had designed Garageband, this might’ve been a tad easier.

While overly simple, Garageband can be a fairly powerful editing tool. It’s got some decent built in effects. Sure, I wasn’t going to be able to master these old recordings with the Analog Tube Master 3000, but I think for the purposes of a defunct, underground band, I did good enough. 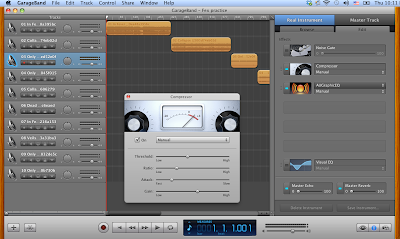 I compiled my disparate files into a single Garageband session. Mostly, I used the basic compressor tool along with a 31 band EQ to get my files sounding better and more even. For a few tracks, I doubleD the file and used a bandpass filter to boost and emphasize some lost elements, like vocals. Considering these are mono files from a single mic for the most part, I think they ended up sounding okay. But Garageband, you do lack a few things.

Once the files were complete, I had to output the session as a single stereo .wav file. 10 or more songs as one file does not a nice download make for bandcamp. In order to make separate tracks, I would have to import the CD quality audio file into Audacity. I had to send the whole dillio to iTunes as a lossless .aif, and from there, convert it to a .wav. Why? Because my copy of Audacity was being a bitch. 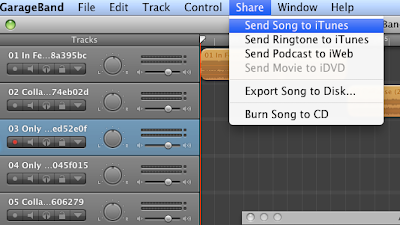 Audacity opens up .wav files, but apparently, not ones made by Garageband. It made my copy quit. But it happily opened .wav files from iTunes. So, I had yet another step of conversion. Sigh. 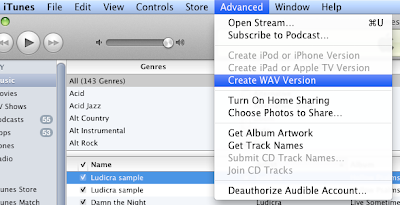 From there, I accessed the iTunes library, got the .wav, and opened it in Audacity. While in Audacity, I bumped the recording up a couple decibels, as Garageband outputs the recording a bit shy of maximum volume. Then I labeled the tracks. This isn’t hard, but it takes some zooming in and out to find the definitive breaks between songs. Place the cursor where you want the break, and “add label at selection.” 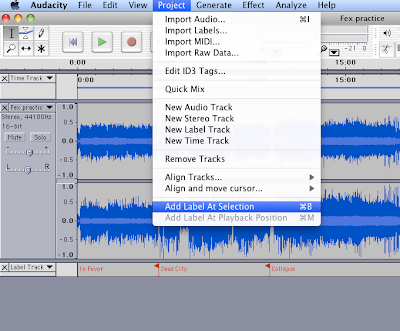 Type in the name of the song with a number for easy album ordering. Audacity doesn’t create meta-data for audio players, unfortunately, but it will separate a recording into all the tracks you want. Once you have the tracks you want labeled, you export the .wavs as multiple files. 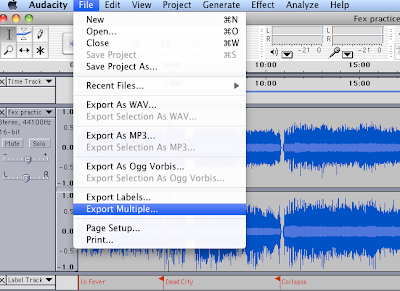 The prompt window’s instructions are easy to follow, and bam, you’ve finally got a session with multiple tracks done. I uploaded these all to bandcamp and now a handful of curious listeners can enjoy the process of a song’s evolution over time. 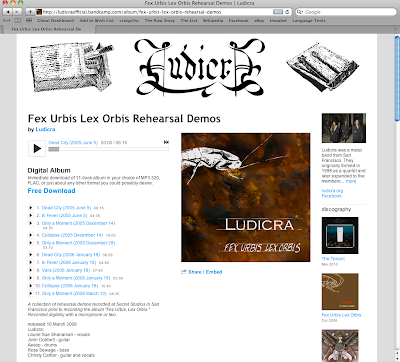 I feel a certain sense of ease knowing this stuff is off my computer and thrown into the ether. There’s also a sense of closure to know any Tom, Dick, or Harriet can have and enjoy Ludicra’s oeuvre and more, all for free, thanks to bandcamp.

For a final au revoir to the years of Ludicra, I also uploaded every iteration of the Ludicra website I still had saved. Probably not of interest to many (if any), but it’s off my computer and just out there. I like that. 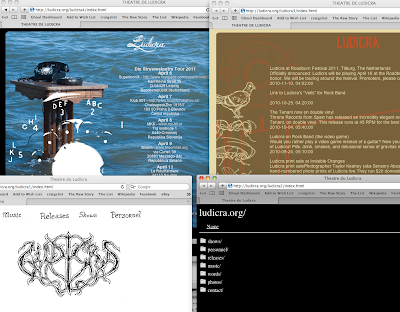 Fuck peace… rest in loudness, Ludicra. It was fun.