I can’t lie, having a half empty, non-stop flight to Europe put me in a great mood. Lying across an entire row of seats is the best way to travel… Besides not being in “economy” aka poor fuckers class. 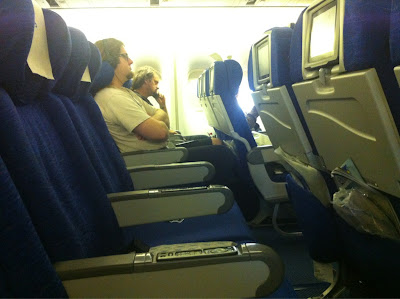 That and a bunch of movies set this nerd well on his way to stop stressin’ and start enjoyin’.

We got into London and met up with out driver Michel and Cannabis Corpse. Heathrow is a bit of a mess as an airport, so it took awhile to find everyone. Add to that the stupid cold, and we were fairly miserable for a bit. Especially those of us who forgot to pack gloves in winter, apparently because we are children who need coddling. Grrr…

We eventually got the whole crew together and headed toward unbalmy London-town of Airstrip One. Despite coming from opposite coasts in the continental United States, the members of these two motley crews have had a lot of interaction over the years. From our Scott just finishing an eight week tour with their Brent late last year and all if us with Landphil the spring before, way way back to me and Sean rockin’ with Impaled back at Twister’s in Richmond, VA on our first national tour in 2000. It was one of Landphil’s first death metal shows, so I hear, and Brent reminded me I lit his cigarette of my alighted bass headstock. There have been a myriad of crossings in-between. 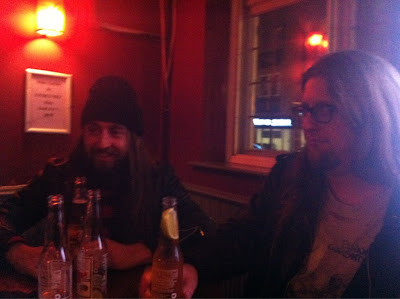 We settled in at a pub/hostel in the Camden neighborhood (known for its shit-dickery) of London called Belushki’s. Jet-lagged, I went to sleep around 4PM. I woke up around 7PM to find my American compatriots quite sloshed. It was snakebite Tuesdays and the cider was flowing. 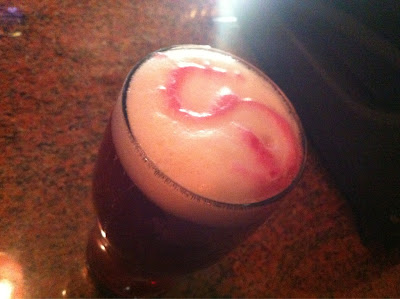 Properly intoxicated, we went on a walk-about in this douchiest of neighborhoods. Within minutes, a young lass was offering one in our party an offer to be her “chimney sweep.” Dino’s head was curiously grabbed by a drunk lad who yelled at him, “Maori!” and could not be assuaged his opinion towards Dino’s heritage as a Pacific Islander who stuck his tongue out and attacked people with a shark tooth baseball bat was entirely of his own imagination. The eve continued with such ridiculousness until our retirement to separate rooms with snoring strangers from far away lands. 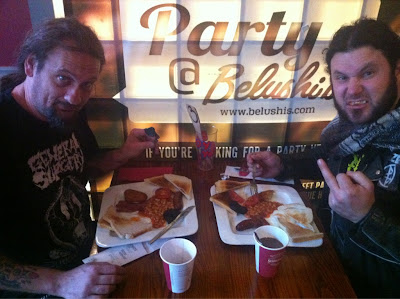 The next morning was started with a traditional English breakfast of lots of fried brown and yellow shit. Dan and I ventured to a music store because he hadn’t had time to acquire instrument cables at home somehow, despite living six blocks from a music store in Santa Cruz. He ended up paying 65+£ for a pair. That’s roughly $100 at the going exchange rate. I’m sure next trip he’ll make time to get his extraneous gear in the States, where life is cheap and everything else is cheaper. 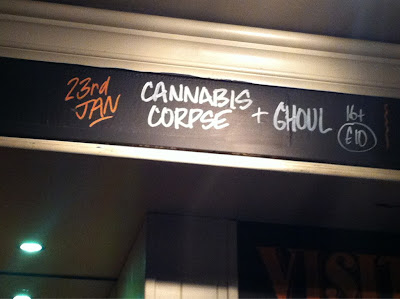 We ventured forth to the Tolkienesque named town of Newcastle on Tyne, named so because sometime in the twelfth century they got a new castle… on the Tyne. Apt, to be sure. 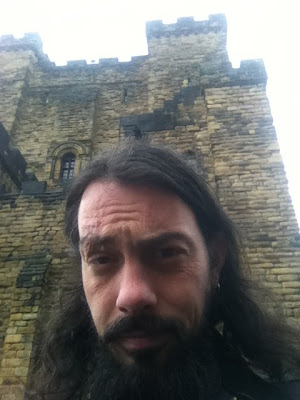 Trillian’s awaited us. And so did our old comrade from Brun, Mr. nee Officer nee Dr. Peter “Pove” Povey. 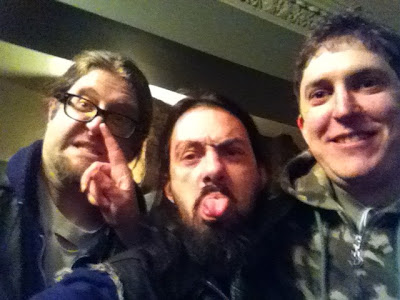 This lad has journeyed forth across America and Europe with us many times and always proved himself almost barely capable of helping. We love the boy, and we love to abuse him.

Despite our best plans as men, some of the plans of mice came through. CDs birthed in the Czech Republic somehow bypassed our Czech driver and his Czech company and ended up in our hands in the Bay Area, instead. There had been a shipping screw-up at the plant. Three days later, we took those CDs, sans jewel cases, exactly back the way they came to meet up with jewel cases that were to be sent, as way of correcting their mistake, to England. Instead, those cases are now where our driver WAS, at his office in the Czech Republic. Sound stupid? It is. So we are pilfering what empty jewel cases we can find from shops in an age of memory sticks and mp3 players. It’s as hard as it seems, coming across shelves of zero inventory. 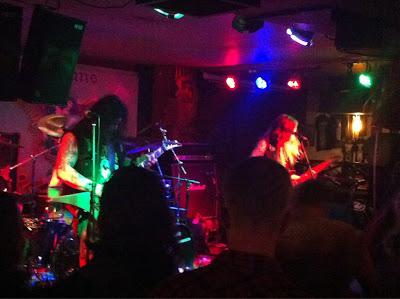 The show was smashing. People moshed in-between the two poles placed just right to really ruin a pit. Lads were rolling around in our floor detritus to gather more blood on their apparel. Cannabis Corpse also slayed it, churning out tight and refreshing death metal madness.

I for one was stoked just about our shirts. There had been an incident… Namely, I had made a few errors doing color separations of our Splatterthrash shirt design. Well, I corrected those mistakes and couldn’t have been more pleased with the results. Glad ta know I’m not a complete fuck up, just partial. We had a lovely sleep-in at the hostel in Newcastle on Tyne and then it was on to Derby on Zilch. First, though, a cuntinental breakfast of just bread and cereal… not even fruit. These people do know why we call them limeys, right? 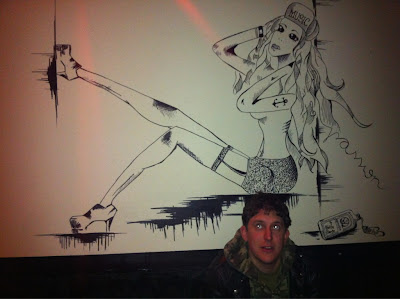 The tiny pub, the Hairy Dog, was quite accommodating regarding their stairs in that they had a full back line of guitar and bass cabs ready to go. My back thanks you, kind sirs. We were treated to a really good opening band by the name of Merciless Terror that I quite enjoyed. 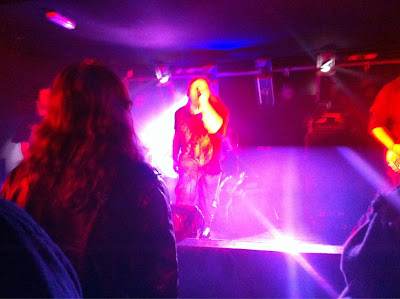 We played for the small but enthusiastic crowd and had a great time, losing a lot of the stiffness we felt on the first night of this sojourn. We were also joined by the original true UK Ghoulunatics, Luke and Charlotte. It was a treat to finally play for then and leave them looking like workers at an abattoir. 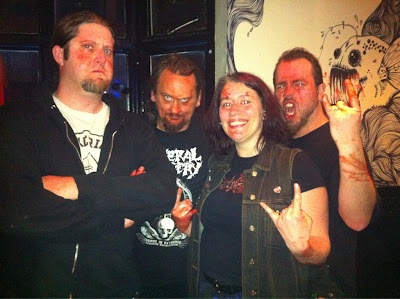 Hallhammer had a few problems during Cannabis Corpse’s set. He lost an out jack on his trigger unit and also broke one of his Ekit trigger hammers. Lucky he had a spare, because that little high tech piece of drum electronica ain’t gonna be easy to find at the local guit fiddle shop.

After a short night of rest, we headed out to the Chunnel. I, for one, am excited to ride a giant train into a gigantic man-made tunnel running underneath the English Channel at 150 kilometers an hour. Hallhammer and Landphil maintain it ain’t a big deal. Yeah, just a wonder and miracle of modern engineering. No biggee.

One thought on “European Bluntkrieg 1”