Those fucking Hall brothers. They were right. The Chunnel was pretty lame. Ya don’t even get ta see the train. But the hall we drove in looked pretty cool after we had watched Alien. 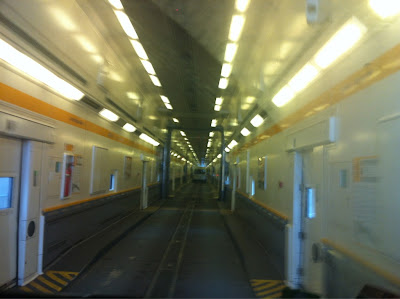 Escape from the U.K. 20 minutes later we were on French soil pointed towards Belgium. For me, things get more interesting once the language changes from English. Or American, as you prefer. 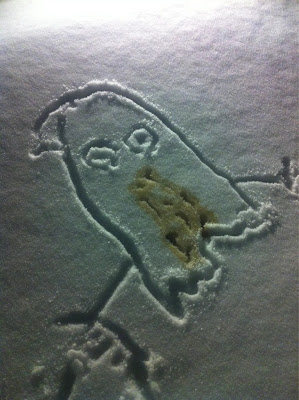 The snow was thick and it was cold as balls. We showed up to a club called Trix that I’d played before in 2011. It’s a nice complex with multiple stages and it’s cleaner than the inside of a bottle of Lysol. 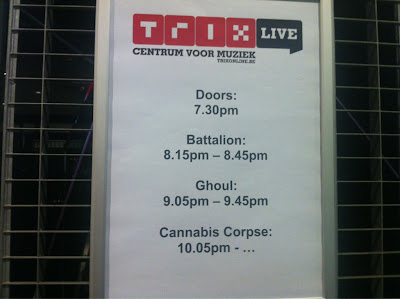 We made sure to change all that. The club was packed with folks who weren’t quite ready for our antics, but then exploded with enthusiasm. It was also cool to see such good friends as my old pals Ine, Dirk and Sophie. Battalion were quite good and Cannabis Corpse had a stellar showing. A drink to success! 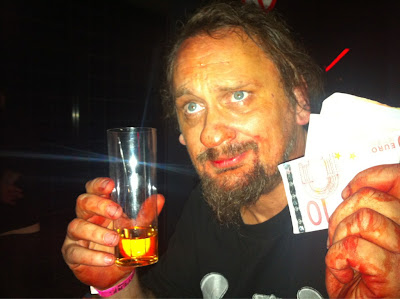 Onwards we charged to Willemeen in the Netherlands. It was blustery and snowy when we saw the best flyer of the tour. 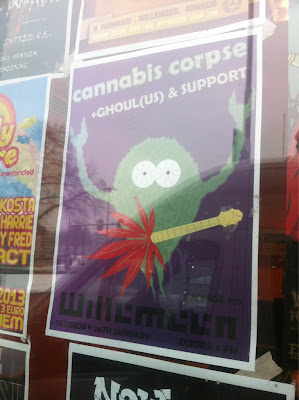 A very accommodating staff was a bit worried about our “blood,” but they shouldn’t have worried as we were running so low. It was practically just water we threw at the crowd. I spent the day seeking out such supplies to no avail and also for jewel cases which were still in short supply.

We had a fun show, but the evening was to end preposterously. The bulk of the travel party decided to walk the short distance to the penchant house that was reserved for our lodging. Our driver and Dino took the van, and I waited for the ever-hungry Dan Randall to return to the club. Dan and I walked on and promptly got lost. The other guys made it faster based on directions I have them and yet could not follow myself. Meanwhile, our driver Mikael and Dino had run what they insisted was a yellow light to the police offers that pulled them over demanding 220€. They didn’t have it, so the police escorted them to the hostel to get their extorted lucre. Dino insists that he had been kind, but it ended with him yelling, “Whores!” at them. And the tense aftermath was what Dan and I encountered. Oh, and the ghost. 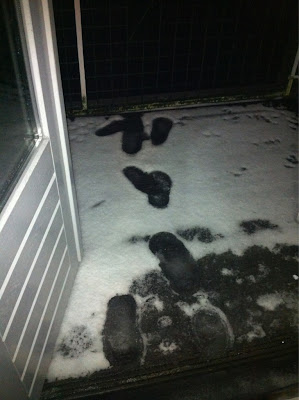 Early the next morning I found these footsteps on our balcony AFTER seeing it before falling asleep, covered by fresh snow. Ookie spooky dooky! And then our poor driver Mikael, continuing his bad luck, broke a window in the penchant house. Time to get the fuck to France. 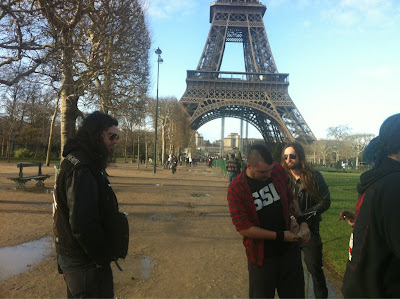 We’d had a long drive so our sight-seeing in France was minimal. We headed to the club Glazart which was amazing in that it actually had parking… in Paris! Unheard of! The night was a blast. Crowds went wild from the opening band Genital Grinder right till the end of Cannabis Corpse. We also got some extra special French cooking for us backstage, nice wine, and my dear friend Olivier brought us some much-needed vials of food coloring. I don’t care what anyone says, I love the froggies.

Finally we were moving on into Germany, metal central of Europe. We arrived at the venue in Kassel… I use the word venue very loosely, for this was more of a rehearsal space and living room. In fact, that’s exactly what it was, in a building full of rehearsal spaces in what I think had been a train yard. This train I saw was built in 1942. I wonder what it was hauling? 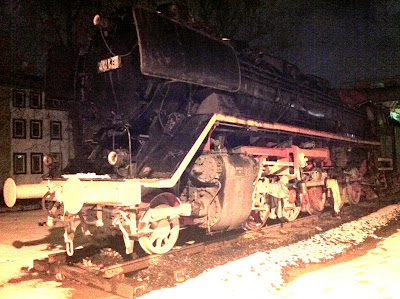 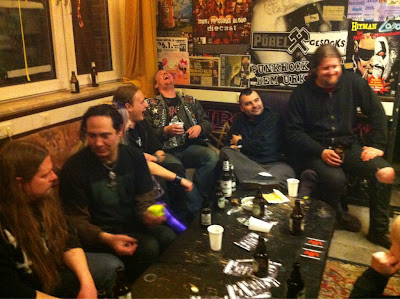 We stayed in a lovely flat, unless you were a furry. I warn you, if you are a furry, this next image could be unsettling. 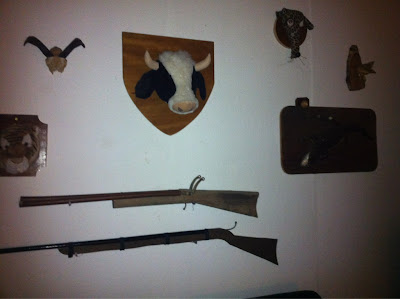 Next up was my second favorite place in the world next to home, Dresden. I was super excited to see all my good friends there, and none more than Conny, our erstwhile regular tour driver and travel partner. Because of our package tour, we couldn’t have Conny and her Knark Art Full Metal Service this tour. Schade! But we did play a block from her flat at the great Chemiefabrik bar. The place was packed and the shots flowed. My personal fave is a Chemiefabrik specialty, the Ratten Hirnen, or rat brain. Some cherry schnapps with egg liqueur form a bloody blob brain in a jar. Everyone got loaded and at least one in the tour party unloaded between some parked cars later on.

Before the show started, we’d gotten some new Mesa Double Rectifiers delivered from Fluffwheels to replace our two fried Peavey 6505s. Turns out, we don’t like the Mesas… at least not for D-tuned splatterthrash.

Fluffwheels also delivered the jewel cases for our CDs that had been sent late. Time to re-jewel our CDs! Except… where had the rest gone? Sean was sure he’d taken them out of his bag and put them “near” the merch in Kassel. No one in Kassel we reached could find them. I was less than pleased. 100 CDs, all our stock left, was gone. 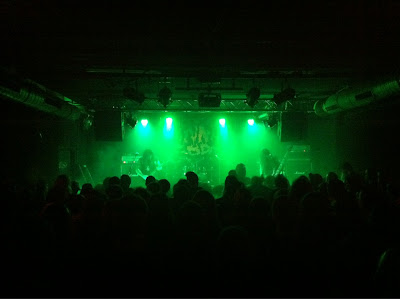 Berlin is an amazing city… one of the world capitals and not an inch of it not covered in graffiti and dog shit. We played Cassiopeia, which is situated in a huge closed-down train yard that is home now to cafes, theaters, clubs, and skate ramps. A lot of folks came and rocked the fuck out and we got to hang with a lot of old friends. It makes me realize I was spoiled as quite the jet setter for a few years there, crossing the pond so much. I miss the regular visits with all the great people I know and have met!
The next day, there was a bit of a panic when Dino never made it to the hotel. People were starting to call out search parties, but he showed up on time for a bus call to the city center to everyone’s relief. He’d borrowed a phone and tried texting Sean, not quite realizing our smart phones are more smart and less phone outside the U.S. We’ve since made sure he has our driver’s phone number, like the rest of us got at the beginning of tour. 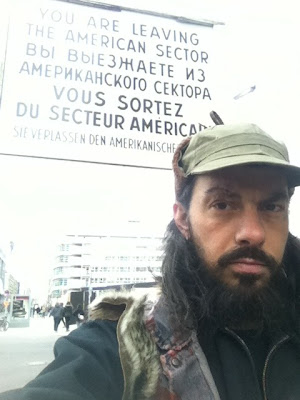 As we got in the van, Mikael yells… “Dummies!” Our missing CDs had been thrust behind the bench seats. Sean says, coyly, “I knew I put them some place safe.” The day was looking good, so we spent some time in Berlin checking out the sites. 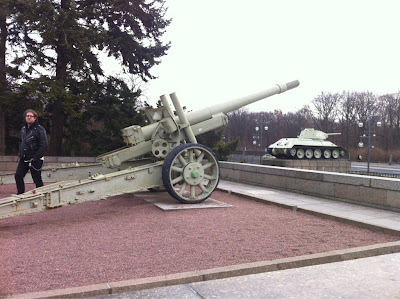 One site in particular was odd, but a treat for two Dunkin Donuts fans! Shit, we don’t even have these in California! 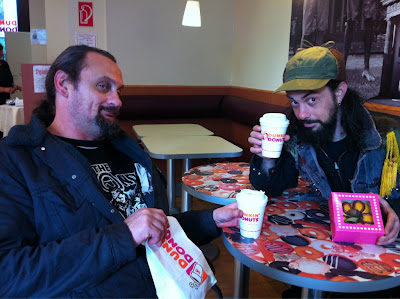 Hamburg was cold and wet. 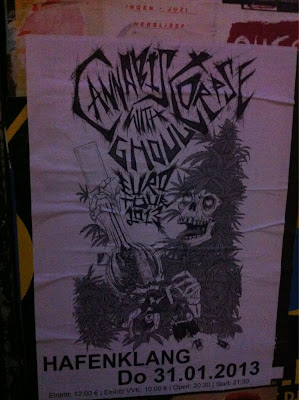 I’d played Hafenklang once before with Ludicra to about 6 people, after Antifa had accused our jewish drummer of having ties to neo-Nazis. This current tour would not suffer that bad luck, and the Hamburgers came out in force for a great night of rollicking. We also got to hang with our bud and Dan’s ex-Desolation band mate Willy, a nice bit of Oakland to visit who now lives in Germany.

And now we’re in Denmark trying to decide what to charge for merchandise, again, as the currency has changed on us. I come on, you people, just get on the Euro. And forget about Greece, they promise never to do it again. 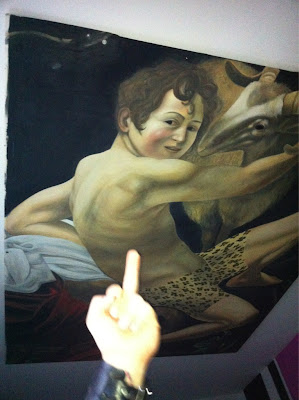