Things are going pretty damn well. We played an indoor soccer, oh SORRY, excuse me, football arena in this weird business complex. It turned out super awesome. It sounds cheap, but I guess this was the usual place for shows. The set up was actually really sweet, with a totally huge stage and great sound. The couple who were running the show were really sweet and laid out a spread of food that keeps giving. Two days later, and we’re still munching on leftovers. Not just pizza, mind you, but real cheeses, fruits, good rolls, and lots of beer and bottled water. It’s amazing to me that I haven’t needed to spend one dollar, oh SORRY, high falutin’ Euro. 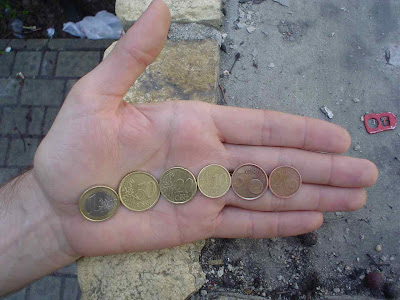 There was some grief with one of the bands and the promoter regarding “bootleg” merchandise. The people putting on the show were running their own distro, and some folks decided that despite the hundreds of dollars they must’ve lavished upon us in the way of food and the money spent on tons of beer and providing a venue didn’t make up for them having a distro at the show. I did see they had an Impaled CD for sale, and they promptly removed it. That was all for me. For others, it was necessary to yell at these people. All of us in Impaled were a little flabbergasted, but maybe we’re just overcome with how nice they treat us here. Should we expect more? I don’t know, but we all made a point to thank them profusely for their generosity after one of our touring party put up a sign with an arrow that said “fuck them” and caused quite a furor. 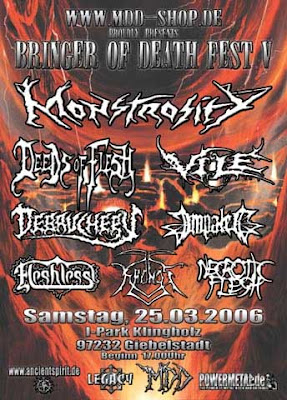 The show was actually more of a fest, with four other bands playing. My favorite was the first band, Necrotic Flesh (I think). They played old school death metal, with super distorted bass, gnarly vocals, and actual d-beats, not just a bunch of blasts. It was great and I had a lot of fun rockin’ out up front to it. It was cool to finally see Fleshless, too, as I’d been getting their splits and albums for a long time. Nice guys, and the one guitar player had the most incredibly out of style mullet going on. What can you expect? They are Czech! It’s awesome.

Our set was the best we’d played so far, I thought, with a huge crowd of kids snapping it up. I guess they didn’t notice we weren’t playing the same notes, but so be it. 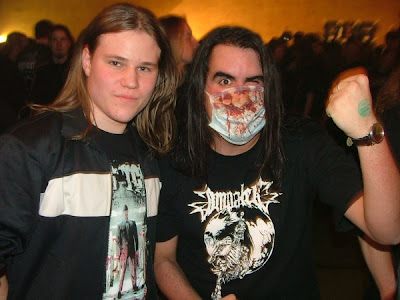 Then it was back to eating. The food just would not stop coming! Also, some crazy kids who just wanted to grill us about every nuance of our lives that they’d read about over the internet or in ‘zines… it’s always weird, but I’m appreciative they give a shit. One kid gave me a pack of cigarillos which are really good until you have the second one. Then it’s just disgusting. I had to ditch the present.

Moving stuff out was an ordeal, at least if you’ve ever dealt with hundreds of drunken Germans. The way out was by the hard liquor table, and it was nigh impossible to get the dancing Deutsche out of our way. At least they were having fun, but seriously, there was no music and they wouldn’t stop dancing.

We also ran into our old friend Joker from Necropolis who’d apparently joined the army and was on his way to Iraq via Germany. I bit my tongue and wished him good luck.

The next day, I woke up and we were already moving shit into the next club in Rotterdam. AH! A familiar place… I’d played this shithole 9 years ago! I say shithole in the most respectful way, as the completely decimated bathroom in this place is an absolute work of drunken, riotous art. It’s a club situated right in a nice park, and I guess the city has been trying to tear it down for years, but they just keep going. That’s rock ‘n’ roll. 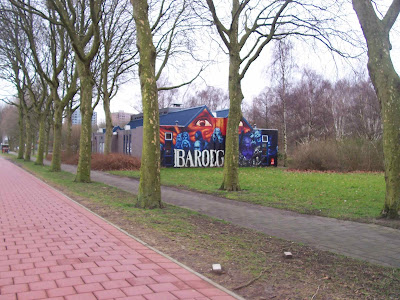 The show went well, save for the triggers we had to add to the drums because the one-handed sound guy couldn’t figure out how to get a drum mic working with the old-assed piecemeal sound board. Raul either sounded like the best drummer ever, doubling every hit even when he was just doing rolls and not touching the kick at all, or he sounded like the worst. It drove us crazy on stage, but we were told it was okay. Oh well… We must’ve done okay, because sales are up. It keeps increasing everyday. At this rate, we might not go back home totally in debt, just kinda in debt. 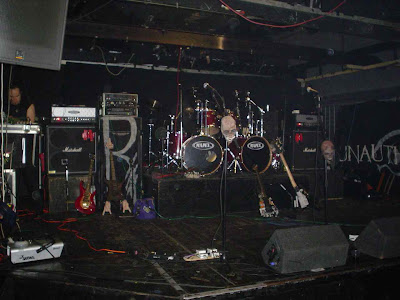 I just ran upstairs to the office to get my internet fix. I’m in serious withdrawl here. I’m on the fucking thing everyday and I miss all my friends on there. Some I’ll be getting to meet in person soon, though, so that rules.

We also got to meet Sly, the Goregnome from Fondlecorpse, a really great band from Holland. He’s big in the Razorback Family, having done tons of layouts for them and being a member of the Hive for along time. If you don’t know what I’m talking about, don’t worry too much, it just means you’re not KVLT enough. Hey Billy, Sly leaves the house! He really does! Also, his sister gets hit on by other people on the tour and it’s funny because they don’t get the time of day. 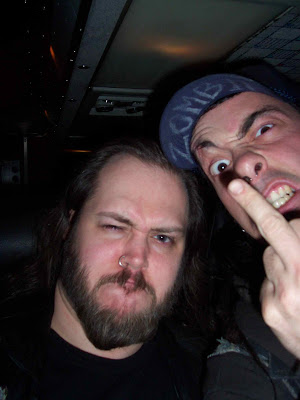 We stayed up long into the night, as no one could sleep after the early show. Reno, the drummer for Vile from Denmark, seems to think it’s okay to sit next to people in little tiny European shorts and nothing else. I told him that he and his European brethren’s free ways made me uncomfortable. Maybe I’ll get used to it and start running around in oddly colored designer briefs, too. Fucking Europeans. Gotta love ’em.

Speaking of which, Stone Golem, my favorite Euro-trash / soundtrack band has managed to write a new song while I’ve been on the road. It perfectly encapsulates the European experience and you should go check it out on my myspace page. I had nothing to do with it whatsoever.

(edit November 5, 2012: Stone Golem was me, duh… recorded in the first couple days while on tour, the vocals were recorded in the rain outside Baroeg. The track is now available here)

Now, we’re on the road again. We were supposed to get a new bus with more bunks and a trailer that doesn’t leak, but I guess it didn’t show up this morning. So yay this bus… I guess. It’s really just not up to my new super high rock star standards. The television doesn’t work, there’s not playstation… REALLY people, this just has GOT to change. I can’t go on if I don’t get my alloted Red Bulls and foot massage. 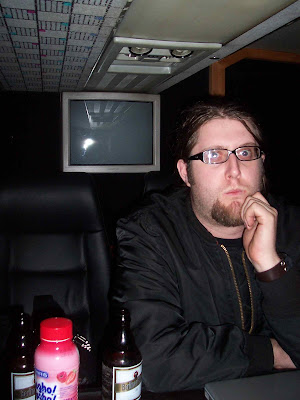