The character was to be an intrepid explorer, searching for the MacGuffin that we would use as a centerpiece for the narrative of the show. Around the time I got to visually designing the character, Alex Jones was making some headlines, not the least of which was when a good acquaintance of mine threw coffee on his fat, ugly face in Seattle. I fucking hate Alex Jones and I liked the idea of killing him on stage. But we don’t do real people in our set. Well, there is no better pop-culture reference to an explorer than Doctor Indiana Jones. So, our Doctor Jones would become a fictional gestalt of the two, exploring the many conspiracy theories that only rubes and chicken-necked nellies believe in.

First, I started with the initial WED clay sculpt over a bust. I decided to make this is as generic a piece as possible, in case we wanted to reuse this effect with a different face attached in the future. Though I referenced some texts and a catalog from Bodyworlds, it was not strictly anatomically correct. Instead, visual elements were inflated to read on stage as “ewwwwww.” 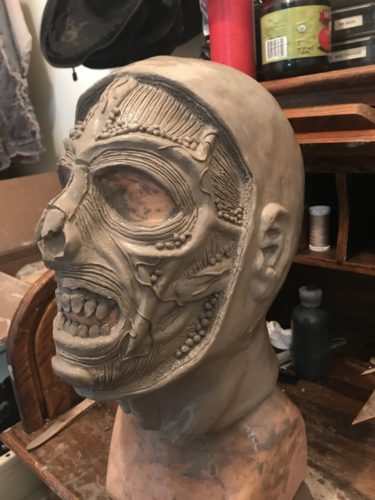 Next, I made a two-part mold using UltraCal plaster. The process is so messy and fucked up that  I didn’t get photos. To summarize, you build a clay wall for one part, make some plaster layers, let it dry, and do the same for the other side. That is SOOOO not as much as is involved, but maybe someday I’ll have someone help me take photos. In the meantime, there’s LOADS of tutorials on YouTube. 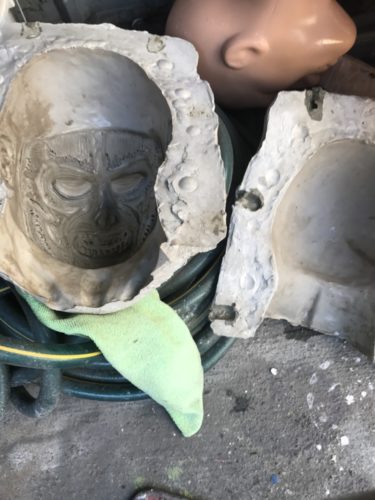 When it came time to pour the casting, I started off by painting in the details using latex I colored with small amounts of acrylic paint. It’s time consuming, but it saves me the pain of poorly painting lots of it later. It is also a more durable coloring, as it’s cast right in. I had problems using the slushing technique before, so this time, I’d fill the mold to the top with latex, pour out the excess, and add more layers as it dried (including one with a cheese cloth lining). This gave me a much more even thickness to the mask and it feels durable as hell. 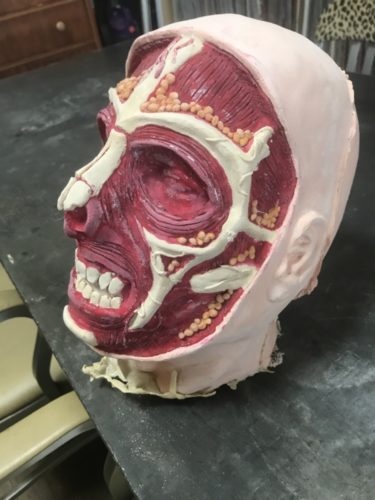 To make the face, I looked at pictures of that fucking charlatan POS Alex Jones. It doesn’t look as much like him as I would’ve liked, but I had exaggerate parts of the face to make it fit over the ripped-off-skin mask. I asked if GWAR had any technique for measuring stuff like this and they do: guessing. So, guess I did, as I hoped the face would fit snugly over the mask. Little tip here… nail your bust down on a board or something, because the first time through, this fucker fell face-forward and I had to re-sculpt it. 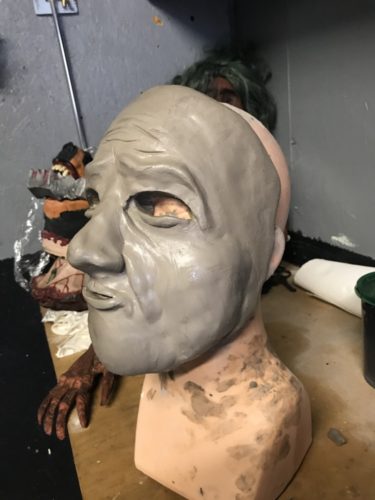 I only need a one-part mold for the face. I used the same caucasian-colored latex that I used for the mask. I did a little airbrushing with mask paint for the lips and eyebrows and to add some color to the cheek. This is how I found out I’m not that good at airbrushing, but it came out serviceable. As luck would have it, the face fit over the mask perfectly! I added a wig that was secured with velcro, a costume fedora, and voila… Doctor Jones was ready to live (and die)!

The final step was adding the spew. I will detail our method of spewing in another post, but essentially it’s running 1/4″ hoses from a pump source through the mask with some limiters on the end to create a spray. And boy, did it spray… well beyond my expectations.

Through two months of tour, the costume worked brilliantly. He came, he saw, he spewed, and every night I had the pleasure of hitting my pantomime Alex Jones in the face with an oversized novelty battle axe. If only I’d had some coffee to throw at him, too.