The SOMArts Day of the Dead Exhibition is an annual celebration based on the traditions of Mexican culture. In this case, a bunch of arty farty types put their twist on it in a gallery in San Francisco. The entire warehouse space is transformed into a bunch of cells with some really amazing work by different artists. Some are more traditional, honoring specific dead people, but by and far the most exhibitors honor the death of ideas. Hey, they’re arty farty. This year, I was able to help my friend Lia realize her installation and it came out smashingly good. 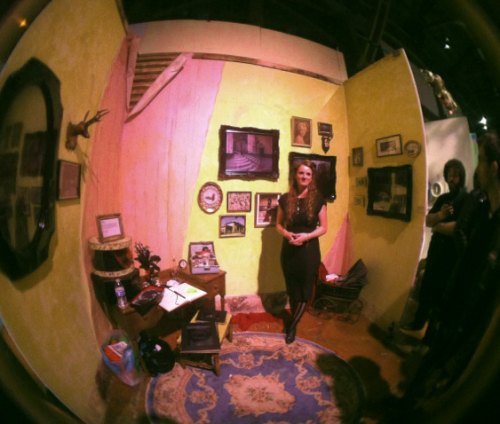 We made Grandma’s house, replete with decay and creepy furniture. The installation itself took shape based upon the photos included in the piece. Lia owns a couple of amazing wolf-dogs (20% dog, 80% wolf). She employed my lovely wife to be her model in a Day of the Dead version of Little Red Riding Hood. Do you want to take a trip to Grandma’s house through scary West Oakland?

We did. Lia rented time at the old 16th Street train station in West Oakland. This place has long been abandoned and is a sign of the grandeur Oakland once was as a travel station before people went to dirty, nasty San Francisco. Oh how things change. We got started by putting my wife in corpse paint, er, Day of the Dead makeup. Whatev, same diff.

We headed to the abandoned station. Well, not so abandoned anymore. When we visited, a haunted house was being built on the premises. The lobby had been retrofitted for a movie starring Nicole Kidman a few years back. It was a far cry from the shit hole Impaled broke into in 2001 for the band photos from Choice Cuts.

The place must’ve been beautiful in its day. It’s got awesome high ceilings and art deco wall fixtures. It was the perfect place of beauty and decay to take Lia’s photos. 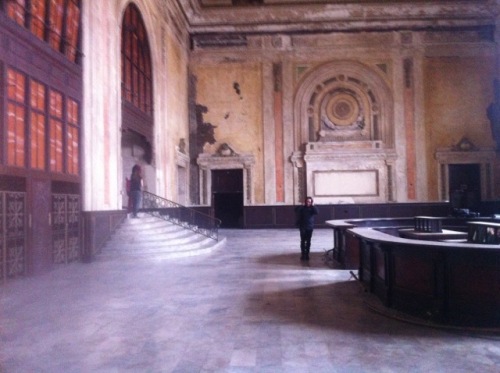 Lia, our friend Peyote, and I took photos of my smoking hot wife. It was later in the day that we came back at the behest of the haunted house people and brought the wolf-dogs. In one of the photos used, I ended up using my vaporizer pen as the world’s tiniest smoke machine. Sometimes, you just gotta make do with what you got.

Lia had about 1,000 photos to choose from by the end of it all. She printed photos from all of us for the show. With those framed, it was time to construct the exhibition. With Little Red Riding Hood and the wolf-dogs being the subject, the next natural move was to construct Grandma’s house.

I nailed up some old boards to the wall to look like exposed wood lath construction. Old timey! We had much less wall paper than we thought, so we tore at it to make it look decayed and use it up in different corners to tie the cell space together. Then we used sponge and watered down paint to weather everything. 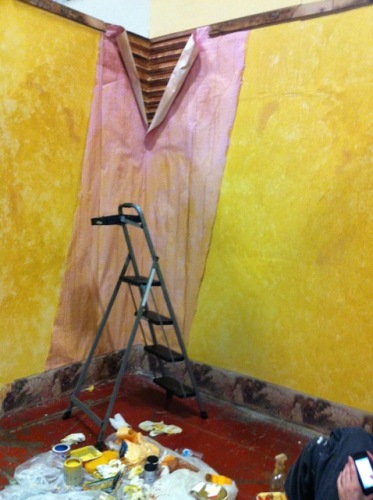 The next day, Lia and my wife hung all the photos and brought in the old furniture. The whole space came together nicely. Lia had a statement about Little Red and her wolves looking for a their home in the remains of West Oakland. I took it a tad more literally and snuck in a photo of my deceased Grandma for opening night. Day of the dead and all that, ya know. 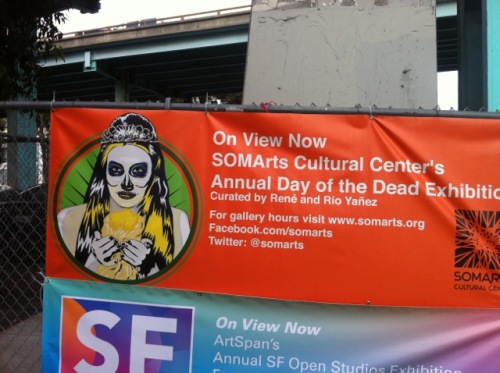 Opening night was a real success. Not only for Lia’s piece that we all helped with, but for the entire show. There were some amazing exhibitions on display. A lot of our friends and family came out… even the wolf-dogs were there. So many people showed up my claustrophobia forced me outdoors.

The exhibition can be viewed (for free) Tuesday through Saturday until November 8. You can check their website for hours. Meanwhile, Lia, Peyote, my wife, and myself will bask in the glory of our work.