John Cobbett of Hammers of Misfortune is an old school kind of guy and I’m not just making age jokes. He runs a Marshall JCM800 for some transparent rockin’ tone from his ’70s Les Paul guitar. A great set-up and dead easy. Maybe too easy. When it comes to leads, it can be hard to pop out over a six-piece prog band. With no boost channel to switch to, Cobbett uses another classic, the MXR Distortion+ guitar pedal. It subtly boosts his tone and adds some more skreem to those licky lixxx. 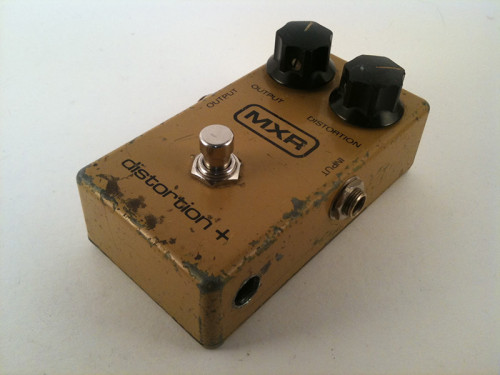 After losing his first one, John picked up this “beauty” off of eBay. Back when we played together in a band, I was just starting to dick around with all my own pedals. Cobbett asked if it was possible to add a power indicator light to his Distortion+. It was and is. Looking back, though, I think I could’ve done it better.

The hole in the case was drilled out by a previous owner. I assume it was to run power from an adapter to the battery clip. These old MXRs don’t have power jacks, only battery clips. I decided to make use of that hole for the LED. 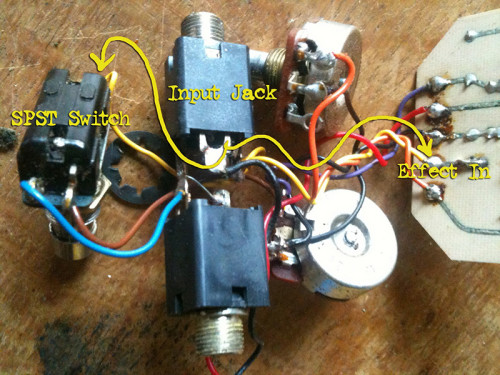 Looking at the guts, once can see another detraction to these old MXR pedals is the switching. A simple SPST (single pull single throw) switch is used. This requires the incoming guitar signal to be split at the input jack towards the clean out and into the effect, dividing the DC voltage and creating what is known as “tone-suck.” You lose clean signal because it’s ALWAYS going down two paths. The switch just changes which path leads to the output. So, the other benefit to this modification is a switch with more poles. The signal won’t be split, it’ll go down one path or the other and be true-bypass. 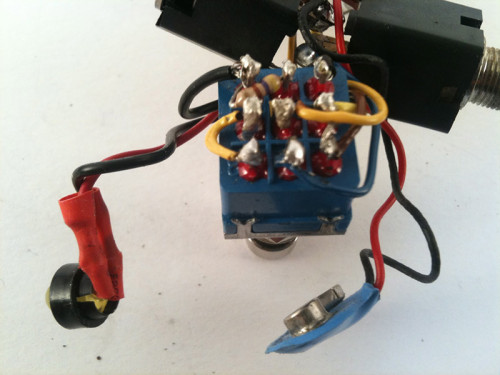 This is the mess I made. It’s the first way I learned to add a 3PDT switch with LED using my pretty shit soldering skills. Boy oh boy, it looks like crap, but it works. This method, easier to understand in the below illustration, has the drawbacks of being a bit messy and doesn’t throw the effect input to ground. 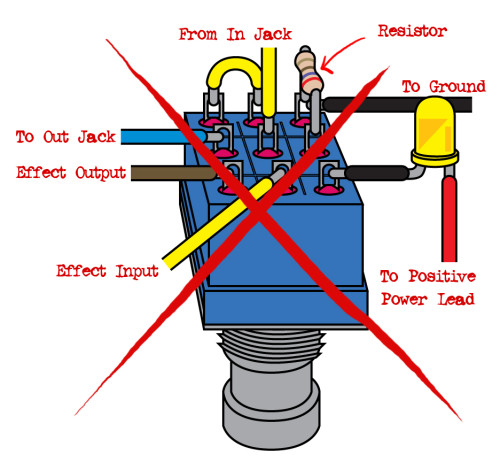 Don’t use this method! At least, not in my humble opinion. The following illustration shows a far cleaner method I’ve caught onto by looking at other pedals. It also has the benefit of switching the effect input wire to connect with the ground, silencing the effect in total. That can be helpful in dealing with electronic pops that sometimes occur when an effect is switched back on.

The ground wire comes from the input jack, connected to the same lead that cuts power from the pedal when the instrument cable is pulled out. That way you’re not left with an LED staying lit when you unplug your pedal. The positive lead is doubled-up on the positive power input for the circuit board. This kind of power splitting can lead to problems in pedals that require more power, creating an audible dip on the effect when the LED lights up. The Distortion+ circuit uses very little power, so it’s likely not a problem. 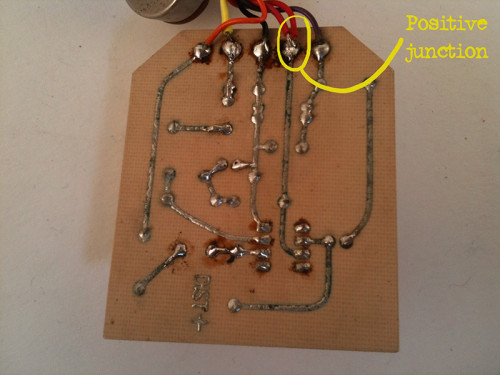 After I bent and glued the LED with holder in place, there was just enough room to still fit the 9V battery inside the pedal. Now it fires up and Sir Cadbury Cobbett can know amongst the din of prog ‘n’ roll when his cute, little boost is engaged. 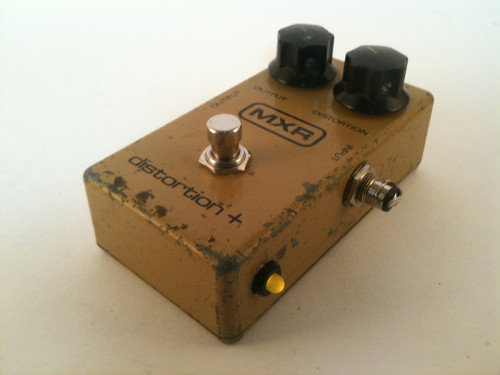 For another, slicker method to add an LED and true-bypass to an old MXR pedal, check out the way I lit up my vintage MXR Phase 90.

0
33
future juggalo rob zombie bride · 16 hours ago
@sewage666
my nephew got an award for doing well during the run, hide, defend drill 🤩 very cool world we live in https://t.co/OiX8i3TI4r
View on Twitter