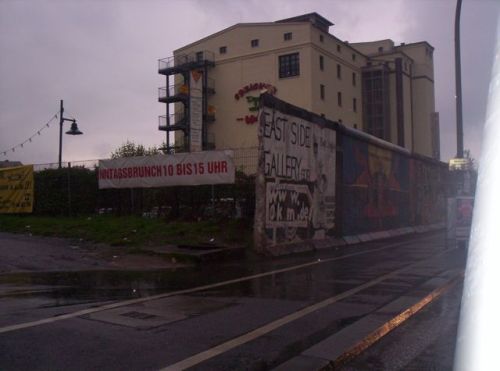 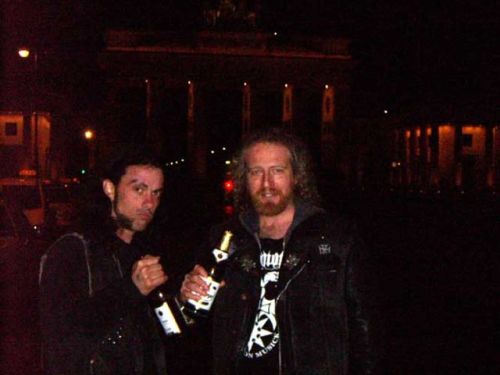 Once at the show, we tried to hit up Corporate Death for a place on the guest list, but he I think we caught him off guard (I’ve never even met the guy) and he couldn’t find his tour manager. I bought him a beer anyway. As soon as we’d polished off the amaretto outside along with our beers, we went in to the bar for some tequila shots and more beer. Oof.

When I got in, who was working merch? Lo and behold, Paul Speckman of Master! We’d played a show once before in the band before Impaled, actually, also with Impaled, but I wasn’t in. Fucking Bay Area incestuousness! It gets hard to figure shit out. Anyway, he at least pretended to remember and we had a good chat about his goings on with his job and with Master. Paul Speckman is a nice guy. Then he told me about how a former associate of mine owes him money. This former associate of mine apparently owes money to loads of people across Europe, and I get to hear about it through this whole tour. Why that’s just bully! Um… yeah. We’re no longer associated. And I never got my money, either. So there. Like how I play the anonymous card so I can talk shit? Fuck it. I learned it from Joe Friday.

The night was a grand spectacle of drunken debauchery. I rocked out to Jungle Rot and Macabre. Actually, I’m a real mean mosher when I’m that loaded. Picking on kids half my age. Well, they should have twice my energy, so fuck them. This one kid, who’s name I forget, became a particular target of my abuse. You’d have to talk to him for awhile, but he’s one of those people who is just itching for abuse. After the show, I wrestled him to the ground a number of times, while his friends kept laughing. Tequila makes a man mean. At least, if I had any in me, because I think I also recall throwing up at some point. Details are hazy.

Conny and I hung outside and had a really cool talk with the guys from Jungle Rot, who seemed a bit displeased with their tour. Let the shit talking commence! We also met up with Nir, my friend from Israel, and once almost Impaled drummer for a tour. I’ve always felt guilty about that. He learned all our songs for our mini-tour with Aborted that was centered around Fuck the Commerce, and we had to cancel because Andrew said he couldn’t get in a plane two weeks before we needed to go. So it would have been me, Sean, and fill-in guy. That’s a no go. Well, now I have more reason to feel guilty, because I didn’t even know he was in the opening band, Whorecore, and we missed them for drinking. Fuck! I’m such an asshole!

Conny and I left and got completely lost on the train. We must’ve been running back and forth 10 times to different trains whenever we’d figured out we’d totally screwed up. Hey, I was a drunk American. I don’t know what her excuse was. We ended up on the ground outside the station, quite literally. We headed back to the apartment, and I did something quite stupid.

The next morning we arose, eventually, and moving was supposed to commence for Denise and Ralf. Conny started to look for her car keys. They had been in the bathroom. We all started looking. We tore the whole apartment up. Everywhere, nothing. Panic started to ensue. A locksmith would be too much. What to do? About an hour into the search, I checked my breast pocket again that I thought was just filled with change. Nope. The car keys. For a split second, I thought about hiding them and then finding them. Naw, I had to fess up. Somehow, drunkenly, I’d put them in my pocket. I don’t know why. This is just something I do, I guess, hiding things from myself so I don’t lose them. It’s an ingenious system. At the end of the night, I ended up buying three cases of beer for everyone as penance. 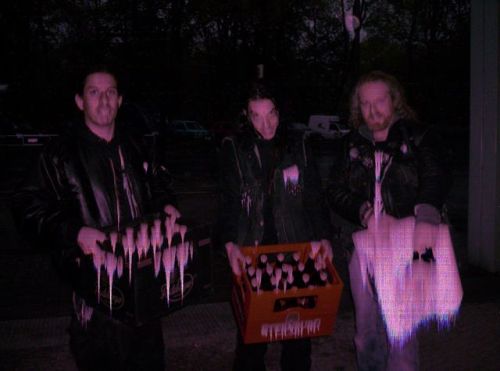 Raul and I sat around bored while the Germans moved stuff and wouldn’t let us help. Later on, towards eve, Conny decided to take Raul, Ewan, and I out for an quick tour of Berlin. We got to see the biggest squat, another artist squat, a giant commie memorial statue, the gate, Checkpoint Charlie, and the Berlin wall. It was pretty damn cool. Did I mention we drank beers the whole time everywhere in public? I just wanted to rub that in again. 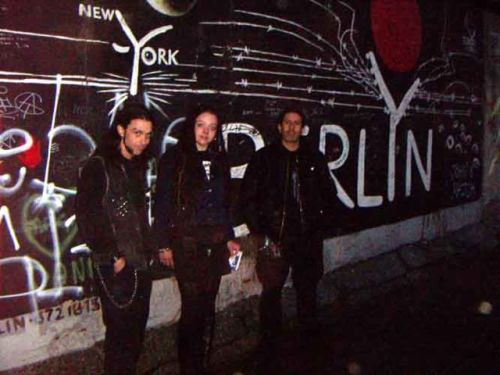 There was a party that night at Denise and Ralf’s. I was having a grand time, until somehow I just disappeared and fell asleep. I remember seeing the bed, but I don’t remember getting into it, or even contemplating sleep. I guess I’d had one too many vodka fruit cups. Ugh. That sucked. I missed the last night of hanging out in Berlin. But then, the same thing happened to Conny the last time she was in the Bay Area, so maybe I’ll just think of it as keeping up a tradition. You know, instead of just being a lightweight. 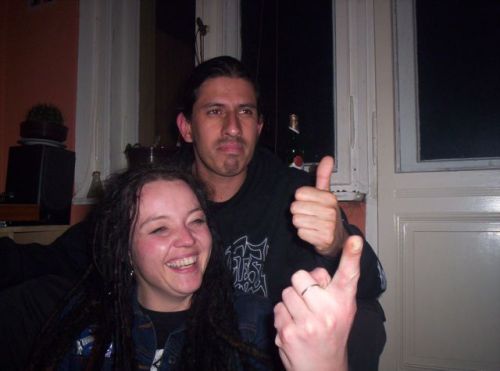 The next day was our train back to Poland and after a night in Warsaw, our flight home. We got to the station about 10 minutes early, and Conny, Raul, and I waited placed our stuff on the platform. Raul said he had to take a quick trip to the bathroom. Okay. Then the train shows up. Raul is still gone. Minutes are ticking by. No Raul. We grab the luggage and go to the door of the train. Still no Raul. Conny and I are freaking out. We had no idea what to do. The doors on the train close. You see, they don’t fuck around with time in German. If it says it leaves at 4:52, it fucking leaves. Raul seemed to think differently, that their would be time for passengers to board. Nope. As the doors close, Raul’s head pops up from the stairwell. We yell, “Wait!!!!” but they’re not gonna wait for anything. Goodbye last train to Poland.

I don’t think I looked at Raul or spoke to him for about two hours. I have a good sense of humor, but sometimes it takes time to kick in. The main thing is, I’m buying Raul a god damn watch. One of those atomic watches that synch in with a satellite and also has an extendable boot to kick his ass when he’s running late from looking at giant ugly towers or taking giant ugly shits.

We thought that was the last train to Poland, but at another station, there was a Night Train (cue Guns ‘n’ Roses song here) to Warsaw. It would be a bit tight, coming in at 5:35 to Poland, and our flight would leave at 7:30. Note to Raul… that’s 7:30. Exactly. Not a minute later. Eiene minuten tu schpat.

The nice thing was to spend some more time with Germans. There was a walk to a dog park, falafel, the graveyard. The time went fast. Too fast. Eventually, I was laughing with Raul again. He’s still a turd, and I made him pay for my second ticket, but all’s well that ends well. If it would end well, which was still up in the air, really. 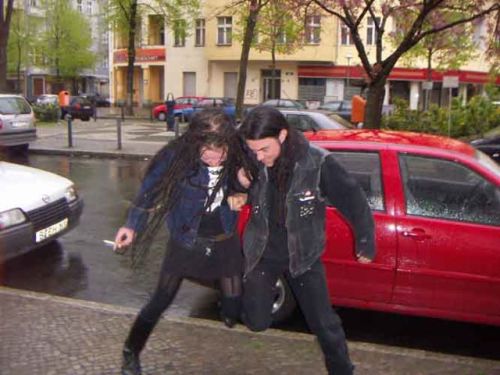 Conny bid us farewell and the night train sucked. It was hot and they ran out of water. We got a cab in Poland with a non-English speaking guy who liked to drive twice the posted speed limit at all times. I wondered if his fare would be higher for all the rocket fuel spent. Then we had to negotiate a fee, as I only had a few Polish bucks and some Euros. He also gave me a cigarette that I’m pretty sure was the equivalent of shoving sand paper down your bronchial cavities.

I’m sad. I didn’t want to leave. Germany holds something really special for me.