Ad Astra Per Astrum. I just took a piss inside the Kansas welcome and information center (in a toilet, ye bastards) and that is printed on the state seal. Being it was an infomation center, I asked for info on the slogan. It means “to the stars through difficulty.” That seemed perfect to describe our first show of the tour.

We drove all day and night and day to Denver. We arrived at the venue, the Blast-O-Mat, an awesome punk house / venue that Sean and I had played before on the Impaled / Phobia tour in ’08. 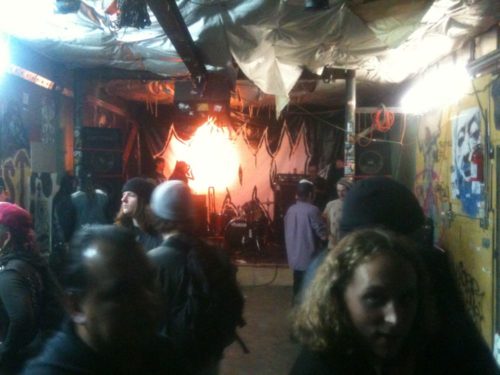 When we parked, our ragged asses stumbled out and stretched to find we’d sheared the new wiring for the trailer by having it hang too low. Son of a… does it ever end?

Time for a drink. 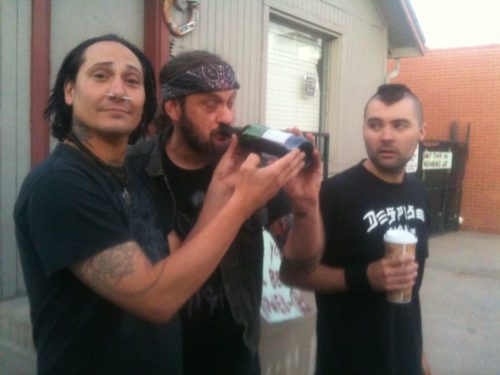 The trailer wires were an easy fix, just some splicing and heat shrink and propmeister Scott wisely packed huge zip ties in his tool box to secure the wires. And that’s where the difficulties ended. Now to the stars…

The local Pyrate Punx of Denver put on this show. Cap’n Josh (or whatever his little club house rank is) did a fantastic job as smelly, crusty-dressed, tattooed folk showed up in droves. He also brought us the biggest pizza we’d ever seen. 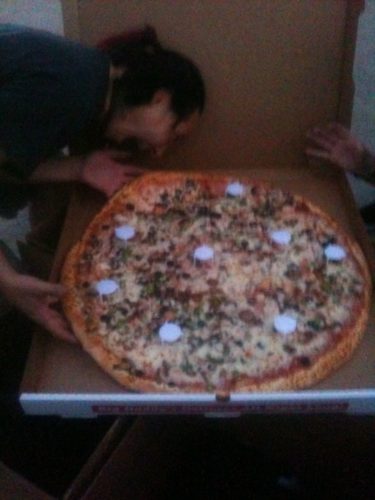 That was until later when the folks we stayed with (members of excellent black metal band Velnius) ordered three more pizza monstrosities. The slice was as big a Paul’s tiny little shit talkin head. 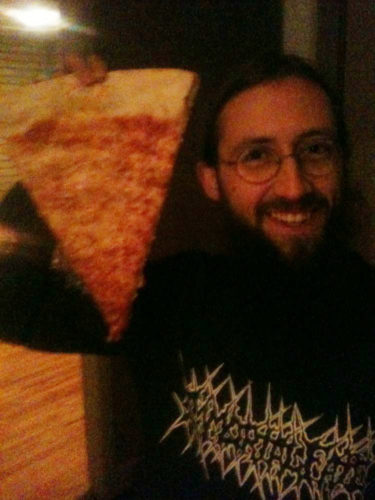 Apparently, huge pizzas are some kind of Colorado thing? I guess it’s for those gigantic people playing football and drinking Coors while towering over the Rockies.

The show went fantastic. The tigers went wild, reaching for blood and knocking over mic stands while dancing up a storm. They cheered when I jeered the local sportsball team in favor of the Creepsylvanian Lemmings. Merchmeister Povey had a gay ol’ time as he lost the bet with Sean that we wouldn’t sell shit. 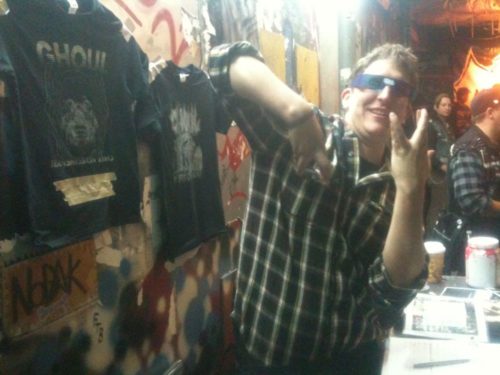 After the show and the amazing game of Tetris (which looks more like Jenga with all our piles o’ shit), we headed to Boulder to stay a brief few hours with my friends in Velnias. Much pizza and rot gut was swilled, but I was excited to visit the workshop of Velnias guitarist/vocalist Petras, his headquarters for Atlas Cabinets. 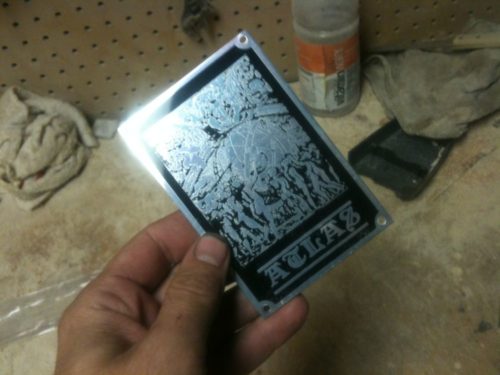 Atlas Cabinets is part of the new breed of American manufacturer… quality over quantity. Be it “boutique” pedals, custom guitars, or handcrafted and finished speaker enclosures, the emphasis is on craftsmanship over thrift. It’s as it goes: when you save a nickel you spend a dime. And that dime goes to China. 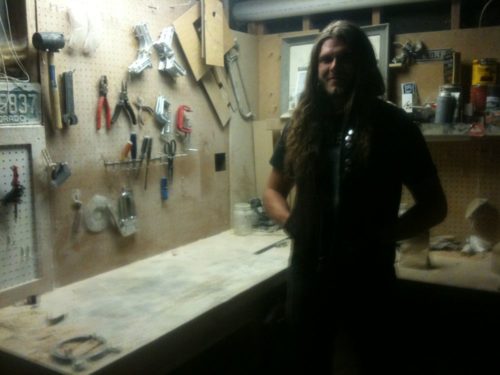 From my standpoint, I just appreciate the little guy (irony here when talking about ceiling-scraper Petras) just ups and takes on the challenge. He started with a bit of architecture schooling and a bit of woodshop, then boned up on what he WANTED to do. Oh, and apparently someone in his band couldn’t afford a new cab. So he just made one. 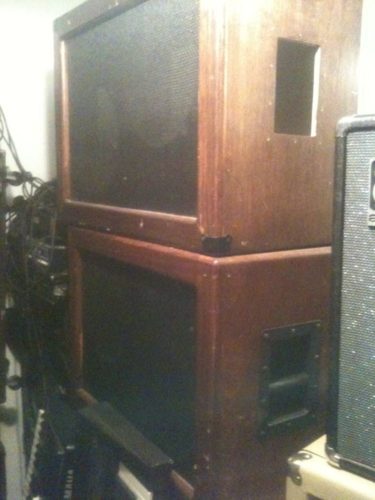 Atlas Cabinets are all made to custom order. Usually they have a stained and sealed wood finish. I have my own issues with that. I ruin nice things, so just cover it in Tolex, please. But they do look classy, I can admit that. 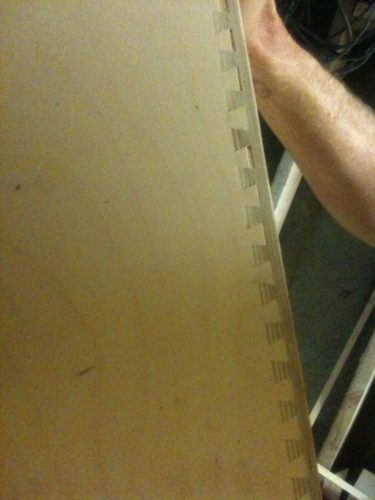 Petras taught himself dovetailing to build the cabinets, a much harder but sturdier way of joining pieces than a butt joint. He uses Baltic birch plywood, the wood of choice for scores of the best enclosures over decades. The Atlas cabs use 3/4″ ply, heavier than what was standard in the past for manufacturers like Marshall. That seems to be the running trend on custom cabs like these now. People are rediscovering heavier tone and huge tube amps again and want to run it through a monster cab in an attempt to crush house PAs (and then using a cheap Boss MT-2 Metal Zone made in Taiwan… oi vey).

In the morn, we engaged in a race against time and fatigue as we pulled our asses outta bed early to get across Kansas to our next show. On the way outta town, though, one last errand.

As I travel from town to town, I always check up on the local craigslist. No, not for “casual encounters,” I check on music gear for sale. I had managed to DIY a road case for my Ampeg V4B before tour and Sean borrowed a case from Dr. Kocol for his Peavey XXX. Protecting our cargo becomes more important as we get older and poorer. The odd amp out was my Ampeg VH-140C that Dan is using. It’s longer than your average bear, but this Denver craigslist seller had a fitting case for sale for cheap… And what a score in the nick o’ time a’fore the fella left for work! 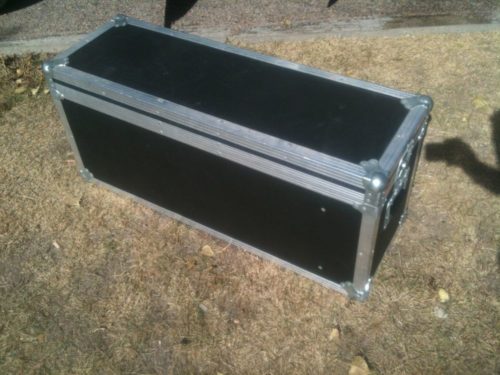 This case is like new and went for a c-note and two bits. It’s well made and has a nice pocket for the cables and footswitch. 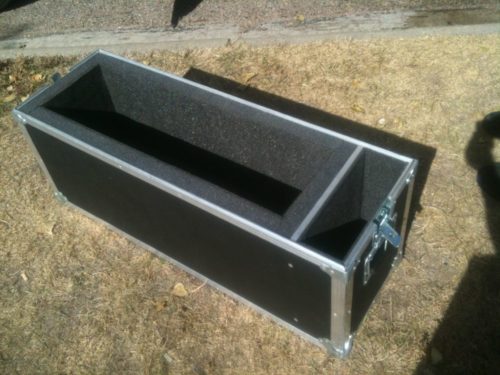 Now, theoretically, all the amps are protected from our own stupidity. Everything is coming up Rossi. Keep reaching for the stars… that’s where I’ll be.

One thought on “Killing Kids in America 2” 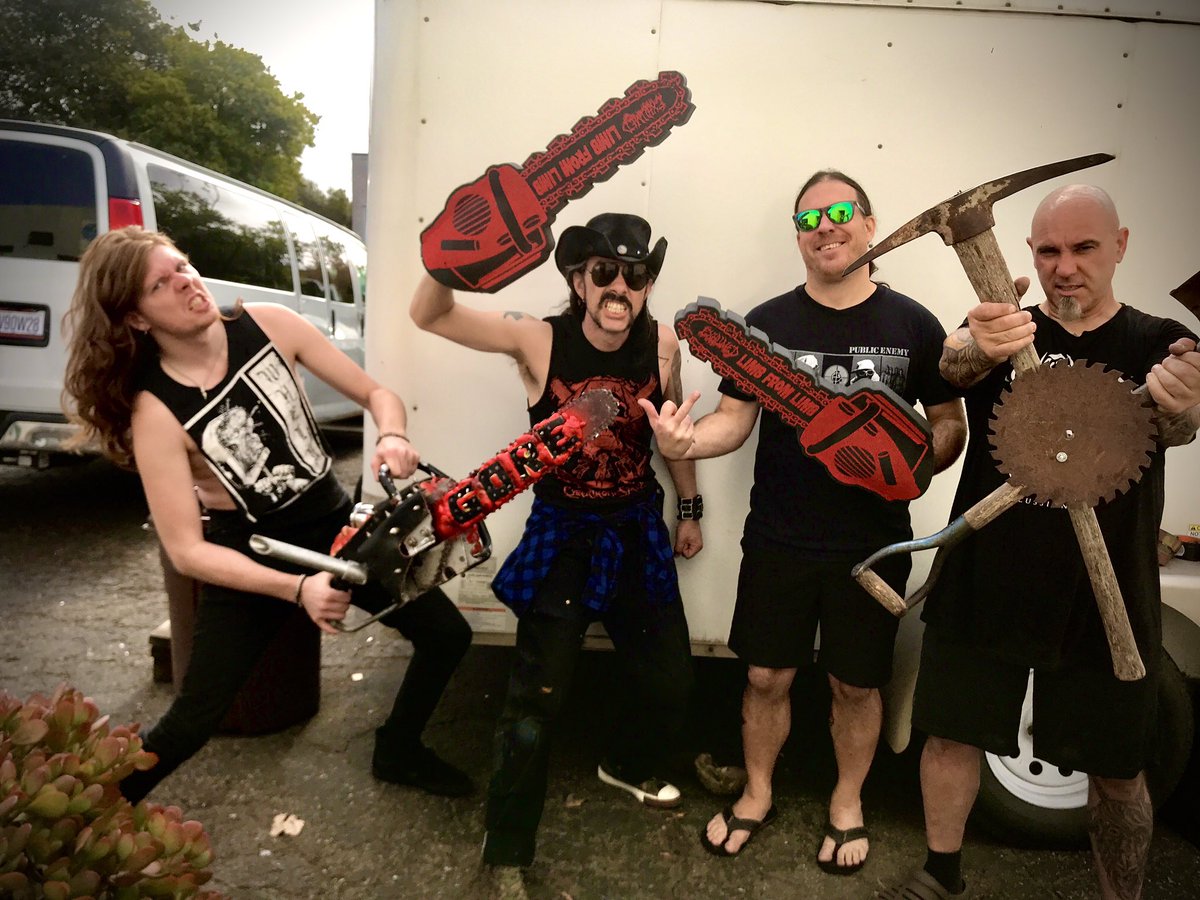