I wrote about my trailer before while on the road with GWAR. Coming back from that trip, I had some clean up work to do on the execrable beast. I thought it merited a little more detail on this often overlooked, but crucial piece of tour gear.
The trailer I picked up is a 5×8′ EZ-Kargo. Don’t bother looking for the company online, they don’t have a web presence. I can’t find them to get replacement parts because they apparently live in the twentieth century. I got this second hand from some former pop-punk bassist whose dreams died and were reborn into a carpenter. It’s a handy trailer, especially in that it has a ramp for loading, which I think is essential for a band and one’s back.

It’s also pretty awesome for KITT to ride up on so you can meet with Devon Miles to discuss what blackmailed podunk civilian farming family of rednecks the Foundation for Law and Government is gonna waste their time on instead of taking on terrorists.

As much as I love that loading ramp, those guide wires on the side are a death trap. I’ve seen more than one hapless soul go flying over those during a dark, late-night load out. A handy thing to do is tie on a brightly colored scarf. It does no one any good to have your vocalist crack his head tripping over those… actually, that could probably do everyone a lot of good for them to shut the f up. Much love! 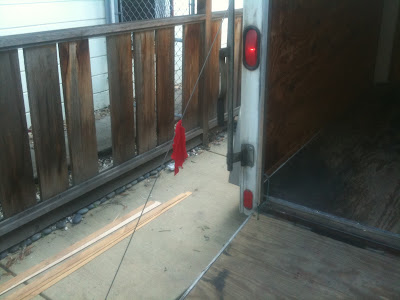 Even though I went without one for the first tour with this trailer, NEVER go out without a spare tire (and corresponding tire iron, natch). One hour outside of Phoenix, I had all the tread rip off a tire on the trailer in 2010. Saints be praised, the tire didn’t blow completely or we might have had an overturned trailer. We were still on time to the show with naught more than a hasty tire change. The trailer didn’t come with a spare or any kind of mount, so I had to buy ’em. I used to have it mounted on the side of the tongue, which was a real pain in the ass. I paid $50 for this tire mount that hung the tire kind of low so it always dragged when we went into shallow driveways. It also blocked a van door on the back from opening.

For $10 I got these tie straps that do the job 110% better. It only took me three years to figure out this solution. Genius me am. There’s also a specialty wire lock that goes around the tire, like this one available on Amazon. Hey, I live in Oakland. You learn to lock everything down. 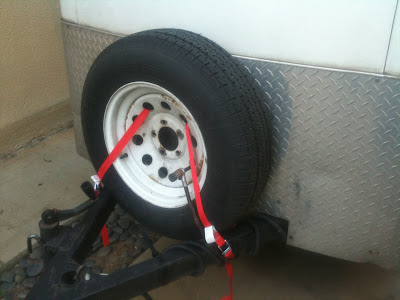 Within two days of Impaled’s first trip with this trailer, we managed to bend the shit out of the trailer jack. It was mounted vertically, and it only took one driveway to permanently cripple us. For a month, we couldn’t drop the trailer from the van. My brother-in-law helped me immensely by welding on this lovely swivel-mount jack. Some models can also be bolted on if you don’t have access to a brother-in-law. It goes down when you have to drop and rides horizontally when you’re in motion. You can also see the clips I use for the safety chains are Master Locks. Again, I lock down anything I can. I’ve heard one too many stories of bands’ entire trailers being stolen. 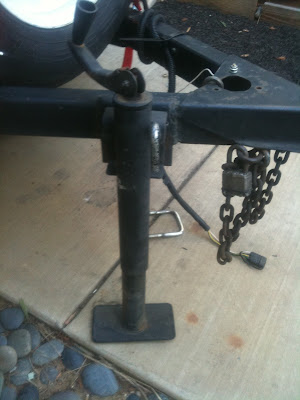 Master Lock also has some great kits available for lockable trailer and hitch pins that are keyed alike with receiver locks. I have yet to see a kit that has it all, but I try to get as many things as I can that share keys. I try to minimize the jingle jangle from my keyring that makes me look like a school janitor. 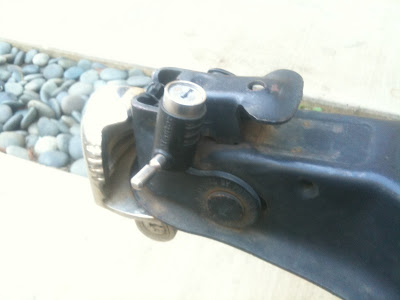 If only they’d sell these keyed-alike items along with the Master Lock hidden shackle locks I use for the trailer door, I’d be set. They’re almost TOO secure. Ask the band that borrowed my trailer, broke the key in the lock, and then had to pay a locksmith $200 to cut the entire thing in half. They got a $200 light show of sparks from a saws-all. Here is the tongue of the trailer that we mangled on that first trip. I always keep a spare lock there just in case some numb nut loses one of the hidden-shackle locks from the back door. They’re secure, but using them also has a slight learning curve. Note the white ground wire for the trailer electrical system as well. That’s double bolted on, now. On my van, the system was grounded through the ball hitch. I always thought the loose, white wire didn’t do anything. When I tried my trailer on another van where the hitch didn’t carry the ground, I found out it did a lot. Unfortunately, I found that out after wasting a day troubleshooting the whole thing. Hey, me am genius, ‘member? 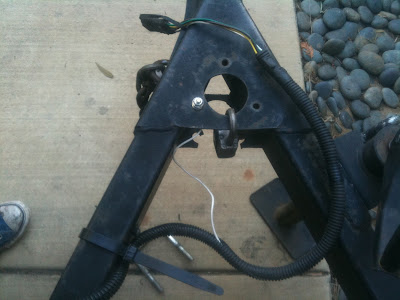 Speaking of the electrical, the two terminal plugs literally create the lifeline to the trailer. They need to be protected. If not, your brake lights don’t work and a semi plows into you in the middle of the night. Or worse, Sheriff Bubba pulls you over for having your lights out and you end up in an Appalachian hoosegow squealing like Ned Beatty on estrogen. Either way you get plowed. The covers are available on Amazon. 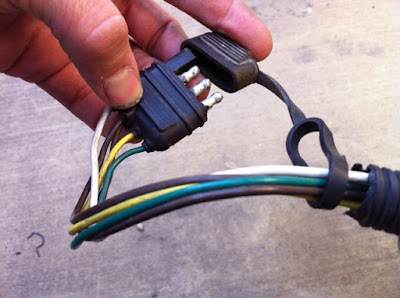 The time I blew the tread off the tire, I also lost a fender. 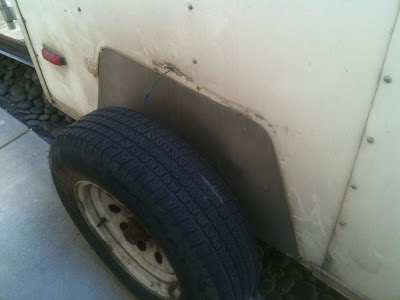 It took me a doozy of a time finding a replacement. Us ding dang coastal elites don’t have a lot of access to trailer parts stores. Horse apples! Finally, I found a cheap one, on of all places, Amazon.com. They were easy enough to install. I drilled some pilot holes followed by self-tapping screws right into the trailer frame. Then I found out why these fenders were so cheap. 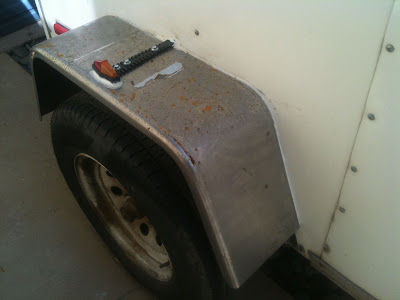 The began rusting right away. Turns out, they weren’t anodized or something, I really don’t know. The point is, they were dog shit. Still, I managed to polish this turd. I had to remove the fenders and sand off the rust with a wire brush drill bit. Then I got this stuff, Rust-Oleum galvanizing compound spray paint. A good couple coats of this, and the cheap steel fender was coated with a layer of rust-resistant zinc particles. 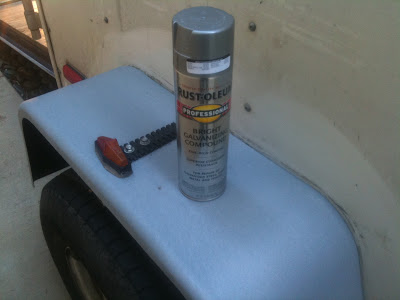 That fender light also had to be replaced with something similar to this link. In theory it’s not hard, as there’s a single spliced power lead to each running light. The running light has one lead to attach to the power and one ground lead that gets attached to any metal part of the grounded trailer. The hard part was getting to those leads.
To get to the electrical system and replace the lights lost to random war wounds, I’d had to take out all of the plywood inside the trailer. These sheets were seamed with 2″ wide, very thin trim wood. It all broke as I ripped at the plywood. I couldn’t find anything like it at the local Soul Depot. I went to the local lumber yard, Ashby Lumber. The friendly staff helped me find a solution: a cheap sheet of wood veneer door skin. I had them cut it into 1.5″ strips, for a meager $1 a cut. 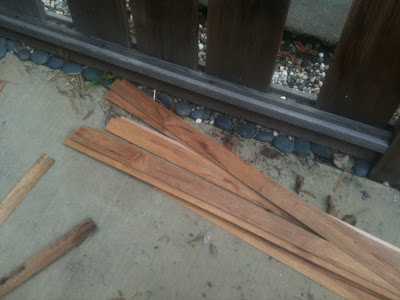 The veneer strips were easily fastened over the seams between plywood panels with nothing more than staple gun. Now all the edges of the ply were covered. I also repainted the sheet metal on the corners and caulked the bottom of the trailer for extra protection against moisture. I happen to like my musical equipment on the un-wet side. 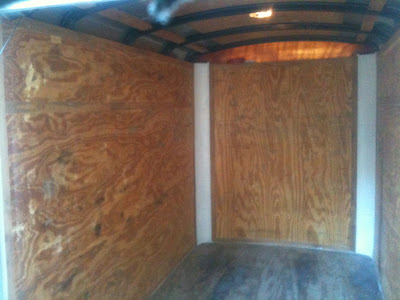 One awesome device I’ve yet to get, but highly recommend, is a tire claw. Wolves in the Throne Room had one for their trailer when I toured with them. Similar to the boot you get from the San Fascist Police Department when you forget to move your car in SF, it locks down on your trailer tire and keeps it from being moved. This is good when you have to drop your trailer, or even when you’re just parked for the night. Like Mulder and Scully, you should trust no one.
A few other handy tips with a trailer is to try and stock up on spare lights and other bits when you’re hitting that all-night truck stop in Nebraska. I’ve found, as an urban boy, these can be hard items to get in the city.
Check your lug nuts on your tires and make sure they actually turn. I got my trailer from a guy who used to live in Minneapolis. The Great Lakes had rusted the lug nuts shut. Gentle giant Max of Hammers of Misfortune took a crack at it and ripped the bolts completely in half. It cost us a tour day getting them removed and replaced when a tire went flat before we’d even left San Francisco back in 2009. Worse than that, I was stuck in Max’s apartment all day waiting and was forced to watch this new show, True Blood.
Finally, before any long trip, your axle should get greased. That’s true on a couple levels, but in this case I’m talking about the trailer. 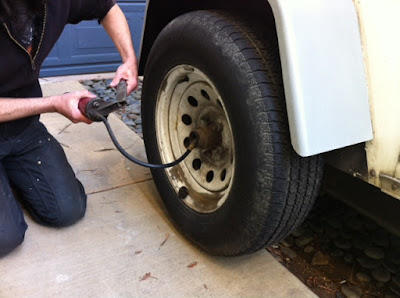 It’s easy to do yourself with a grease gun. Pop off the lube cover and just give the hole a couple pumps. Yeah. If this is just too much for you to take, bring the trailer into a mechanic. Just don’t wink a lot when you say, “I need my axle greased.”
Doktor Ross Sewage
www.doktorsewage.com 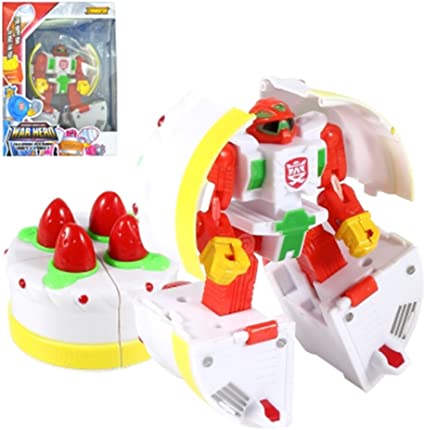 YakkoPilled @Bunky_Choner
Ive fucking had it with pastry chefs. Here, now real cakes are made of meat. How do you like that? How does if feel to know our pain?? https://t.co/RIgZ1qwoBX
3
18
Doktor Ross Sewage @sewage666
14 hours ago
so jealous... this is rad https://t.co/5dHFoChLFV
View on Twitter
0
17
Follow @sewage666