It was a dark and stormy night. Then she rolled in… a grey dame who needed some work. I was gonna ride her like Mitt Romney’s convictions… all over the place. 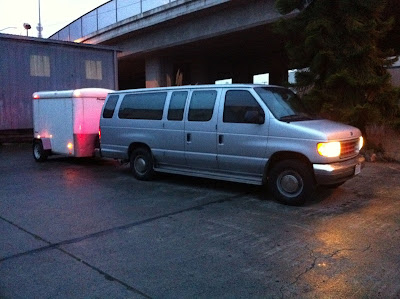 Thanks to all the kiddies who donated, we got ourselves a van. It was better than ideal… it was available. A ’94 Ford E-350 Club Wagon Van. For that year, the mileage is low, like the point of a career after making “Jack and Jill.”

After purchasing the van in SF, we took it to a shop. It ended up needing more work than the citizens of the state with the currently most unemployed, i.e. Nevada. Our weekend of doing interior work to the van was shot full of more holes than a “suspect” detained by the BART police. We had to begin our work around 7PM, the very night before we were gonna 23 skidoo.

The previous owner had installed a loft and a vintage loveseat. All it was missing was a fixed gear on the roof to really be from San Fran. Sean and I ripped out the loveseat like a pair of divorcees… he took half. We ended up dumping that sofa in Oakland like… like all the other fucking sofas that are dumped around Oakland. 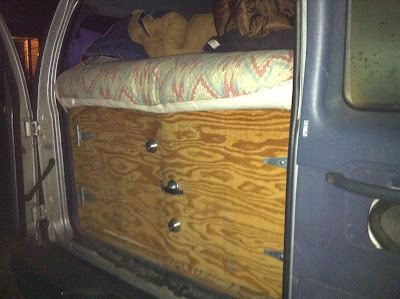 The loft was made well with back doors in the back that locked. It was big, a queen size. The exact dimensions required by one Elizabeth II. Not being beholden to the commonwealth, we cut that fucker down about a foot. We had to fit in a coupla benches so our band of roving troubadours could sleep like a real touring band… homeless. 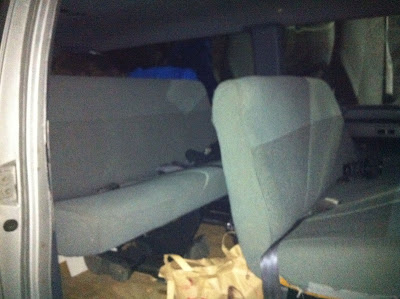 To bolt down the bench, I thought we’d have to make new holes like a Roman decorating his cross. Sean had the idea to move the mountain to Mohammed, or in modern parlance, move the building to the plane. We’d move the legs of the benches to fit the stock mounting holes in the van. I drilled some holes and used some self-tapping bolts for the job. By Tuesday 1AM, we were more finished than a crappy rock band dressed like monsters winning the Eurovision Song Contest. 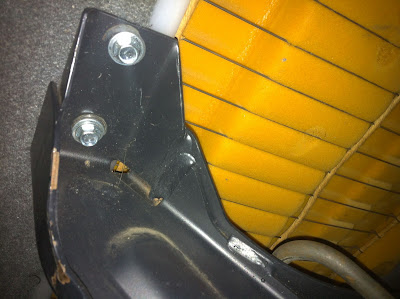 5AM and we were on our way. We packed up our shit like a port-a-potty attendant and headed on our way to Richmond, VA. The rain was coming down on us hard and thick, like Peter North after drinking a banana smoothie. I checked my smart phone and the prognosis was bad… blizzards, and not the kind that come with crumbled Oreos. We turned away from our path towards the Sierras and headed towards the Mojave, instead. We wouldn’t be heading through all those weird, NASCAR-lovin’ pro-lifin’ militia-havin’ immigrant-huntin’ guv’ment-hatin’ states, rather we’d be headin through those other weird, NASCAR-lovin’ pro-lifin’ militia-havin’ immigrant-huntin’ guv’ment-hatin’ states. America, truly the melting pot. 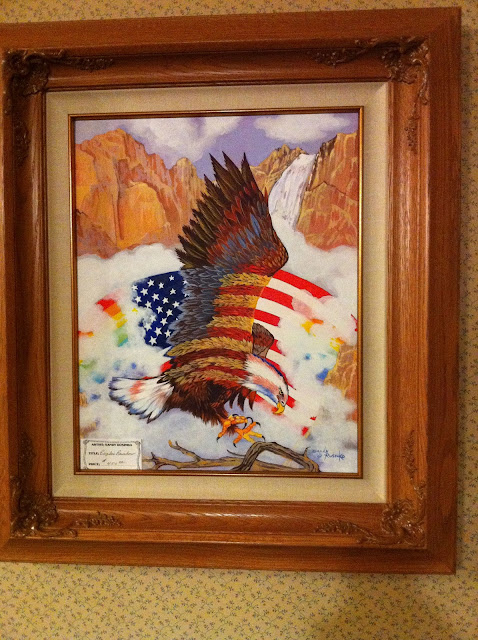 And somehow, magically, after a 3,000 miles long drive we’ll be in Antarctica livin with monsters like Kurt Russell in the best horror movie ever made. Disagree? “Yeah, well fuck you, too!” But first, taco night at Jim’s in Richmond. It’s so nice to be back in my jammy pants. 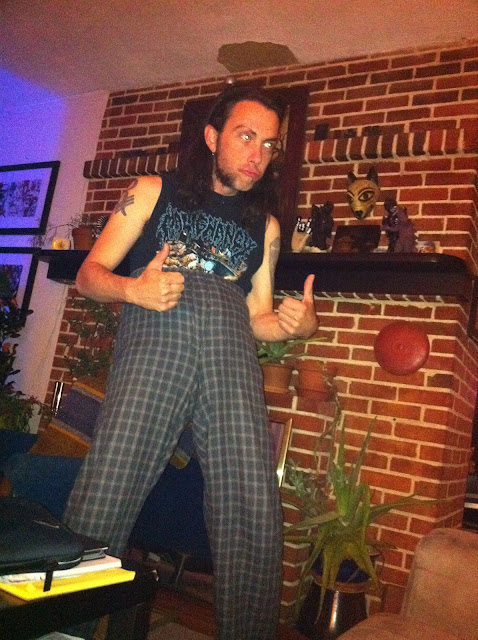 For a list of the tour dates we’re going on with GWAR, Municipal Waste, and Kylesa check out it out here.