Dateline: San Antonio. There was something I was supposed to remember in this town. Something someone said to remember. Whatev. 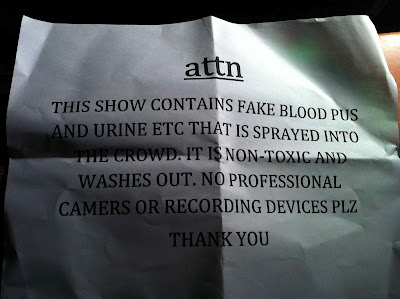 This was the first show of the tour with Kylesa. No lie, I was worried about their gear set up and staging everything in some of these places. Two drummers, keys, a theremin… what with our already full set up, this could get messy backstage.

I shouldn’t have worried. Kylesa are total road dogs and eminent pros. I’ve known Phillip and Laura for some time and they know what they’re doing. The rest of their crew is also top notch dudes. The shows are going to go smooth.

It was fun to surprise at least Laura with my appearance. I’ve surprised her before, showing up with Wolves in the Throne Room. With this band, she didn’t know I was one of the goons with a bag on his head. What a proud life to lead.

We headed to hot and humid Corpus Christi next. It was like driving into an old Voivod record cover, what with all the oil refineries. The downtown also was kinda like a ghost town. Maybe Körgull had laid waste to the citizenry. Nah, once it was show time, they all came out and we had an amazing show. 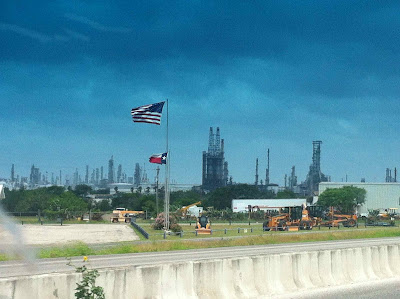 At this show I had to acquire a fan for my amp. I’m stunned how hard it is to find a clip-on work fan these days. See, Beefcake’s head broke, so he took Jase’s from Legacy of Disorder. Unfortunately, the GWAR stage set up requires things to be strapped down. So now Jase is using my old-ass Ampeg V4-B, which he apparently digs the fuck outta. But in this climate and running twice as long, I’ll be damned to blow out a transformer from overheating for lack of a $20 fan.

One girl in the crowd unwittingly showed us how to do the Graveyard Mosh. We’ve been playing that song since the beginning, but no one ever though about how it was done. It was awesome. Stick your arms out, head down, and start goose-stepping like Boris Karloff as the Mummy.

This guy also came out with the best unofficial GWAR costume yet. Beef-fake the Mighty. We were trying to figure out why he would wear something so heavy to a show in this hot place. Then I noticed every girl in the place wanted a photo with him. Smooooth. 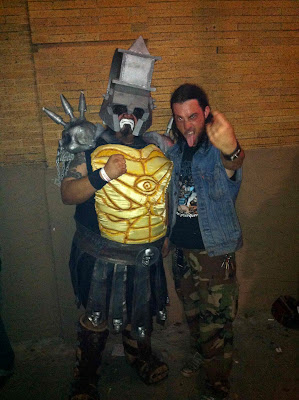 The next day we headed to New Orleans for a one-off show away from tour. We were headlining a punk show at Siberia, the best metal / punk dive in NOLA. Maybe the only one?

It was a lot like a show back home… plenty of cavewomen and crusty dudes outside spanging and not coming in, and then plenty of punks on the inside. Some of the GWAR and Legacy of Disorder camp came out on their night off (to see yet another show?) and we had a great time. Total anarchy. Sammy from Goatwhore and Dez from High on Fire also attending was an awesome surprise. We headed to the French Quarter and drank away.

Our troupe got separated as we headed to the van. I called Balzac, who’d been with him last. In hushed tones I heard, “yeah?” “Is Dino with you?” I asked, which he quietly confirmed. “Why are you so quiet?” I questioned. “We hopped the wall into the cemetery. Bye!”

The next day we drove through the ghetto in the lower ninth ward. Boarded up houses, closed schools with signs that hadn’t changed since 2005… Meanwhile in the French Quarter, lotsa white folks were walking round sippin’ on $5 lattes and buying tees that said “I got Bourbon-Faced on Shit Street”. Oi vey. NOLA, you’re a sad ghost of your former self.

On the way into Florida, I got one of my favorite regional treats. Mostly found in Georgia and Florida, so far as I can tell… boiled peanuts. I wish these were EVERYWHERE. They look like the inside of a teste, and they taste as good as one, too! Seriously, these are amazing. 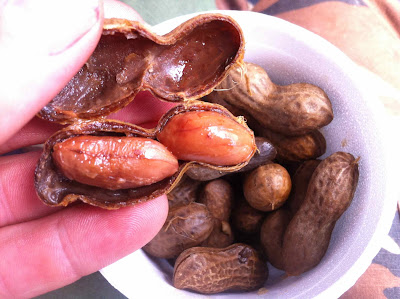 We had a great show in Pensacola, FL that night and then drove all night to Orlando. The show was a bit of a cluster, having two venues run simultaneously side-by-side with largely the same crew. Three tour buses had to find parking, along with all the openers’ vans. All the spare tables for merch had been used up, so I jerry-rigged one for us and Legacy of Disorder out of a broken bathroom stall door I found in the back. That other show had a bunch of fancy hair cuts, tight jeans, and that new breed of hardcore tee that looks like it should be on Pauly D. from Jeresy Shore instead of at a “rock” venue. I wanted nothing to do with that.

The show went fine. As fine as it could while I took center stage because of the shallow space. My feet were literally up to the edge of the stage with Dino’s cymbal stands in my back. I proceeded to get drunk. Very drunk. I also had the best veggie dogs of my life from this dear street vendor. I ate four or five, I can’t remember. I just know I couldn’t stop. 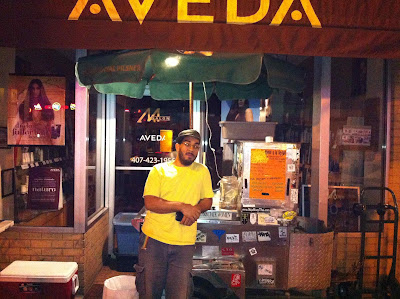 Gerrity, who’d done merch for Municipal Waste, came to the show and by the end was unofficial caretaker of me and our van. Dan and Dino split with GWAR while the others went to lodge at a condo that Jim, (our merch guy) had secured with his sister. Gerrity DD’d my ass over to his friends’ place. Daniel, guitarist for Possessed, and his lovely girlfriend Lyndsey, put me up and made sure our van was safe in their driveway.

Sean, Scott, Jim, and I met up the next day to head to Jacksonville Beach. Having arrived early with GWAR, Dan had acquired quite nice looking sunburn while surfing, or whatever hippies like him from Santa Cruz do at the beach.

The show went great, and we drove all night (again) to Asheville, NC. I was impressed, never having been here, by the amazing cross-over of latte-sipping liberal hipster and gun-toting redneck, livin’ side-by-side. Kinda like Portland, but more rifles.

Asheville really is beautiful, too, with rolling hills and lush, green foliage. And monuments to the Confederacy. Well, ya can’t win ’em all. Anyway, the Orange Peel, where we played, was awesome with a huuuge stage and much ass was kicked. The next morning, we woke up to a flat tire in the hotel parking lot. It made us a little late, but I’ll thank my lucky stars it wasn’t a blow out. 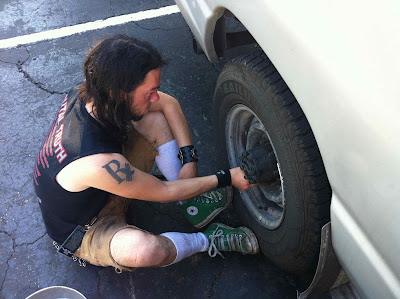 We headed out the next morning to North Myrtle Beach for another House of Blues, Inc. gig. Nothing says down home southern blues like a chain of corporate interest held music venues decorated with the same kind of dedication to homogenization as a Starbucks. The super cool part about was any entertainer at the House of Blues got a free pass to the park next door, Alligator Adventure!!! 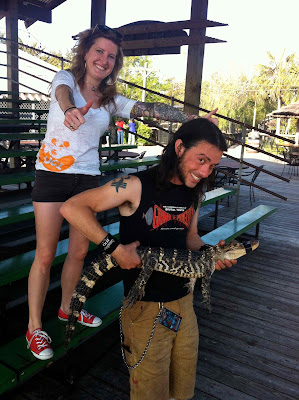 I can’t say enough about how cool it was to be able to hold a small alligator. I think they’re fucking cute buggers. All full of hate and cold blood. And the chinese alligators, the albino alligators, the amazonian crocs, the malaysian crocs, the 20′ croc… Holy snap. It’s geared to families, obviously, but I made the lone reptile showman give me, Laura, and Matt Maguire the full-on reptile lecture he’d give any school group.

Afterwards, I headed to the beach. It was beautiful at sunset, but a little depressing that all but one entrance for miles around was private. This is a beach for rich folk, and I got many funny looks as an interloper.

The show was as ridiculous as we’ve had yet. I’m pretty sure everyone was a little sauced as we bantered the night away. The playing? I don’t recall. I headed over to the Olive Garden to see my family, as advertised, and then passed the F out.

I woke up in Richmond, VA. We had stopped at Jim’s for a visit on the way to Baltimore. He went to his doctor. Turns out he’s had walking pneumonia. Shit. I’ll bet he’s not the only one as the sickness has been passed through all the bands this our. Ugh. I always wanted our metal to be the sickest, but this is ridiculous.