Just three weeks had passed by since we finished the GWAR tour. We left the van in Richmond, VA with our stalwart new merch/monster Jim. While we were away, he took the van to get checked out, and there were no issues other than a busted lock. It appeared we were in the clear as far major mechanical failures were concerned. The costumes were left clean, the gear ready to go; basically we jumped back into a tour that was already organized, packed, and ready to go. 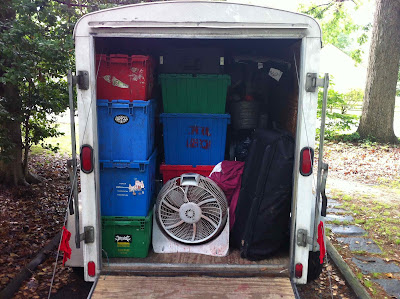 We flew pretty cheap outta San Jose and got to DC where Jim met up with us. Three weeks of our personal lives had pretty much just flew as well. The flights in and out of the East Coast for five of us ended up cheaper than trying to drive back and forth across the country. It was a wise move and way easier.

We stayed in Richmond that night. The next day we had off, so headed to the King’s Dominion theme park with some new friends and some of the GWAR guys to get our socks knocked off by some rolly coasters. The band that rides coasters together, stays together. 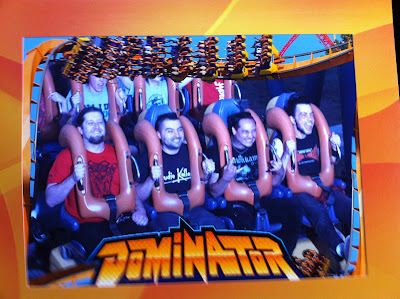 After all the fun, we headed to the jam space of Occultist, the band we would be touring with. They let us set up on their gear and get in a much needed jam session. We hadn’t played together in three fucking weeks! Despite Dino having toured for two weeks with Noothgrush in Europe as their new vocalist, he didn’t miss a fucking beat. We added a bunch of songs to the set and felt pretty good about our chances. 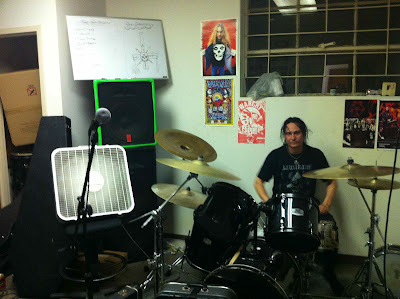 We headed to Pittsburgh the next day. Belvedere’s Ultra-Dive was kinda just that… a big fucking dive. The show room look like a 70’s dad had expanded his man cave with wood paneling and weird wooden shades that divided the room. The staff was super cool and the promoter Josh did a good job. It was a Monday, and apparently we did very well attracting folks on a shit night of the week. We played with some excellent bands, like Ratface (loved it!), Anthropic (grinded hard), and the curiously and unfortunately named (because they fucking RULE) Oh Shit They’re Going to Kill Us.

Occultist was awesome and nice to finally see at the beginning of our tour. Then we played, and people were god damned animals. It was basically use kind of playing, but more so resetting our microphones as people raged and danced on and off the stage. These punk nerds were left bloodied, beaten and beaming. 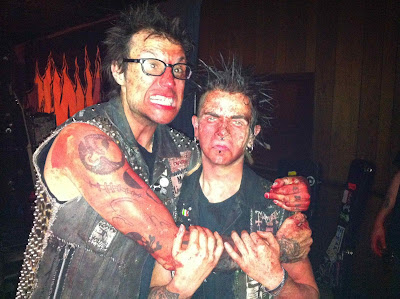 Speaking of microphones, I finally bought my own. I was so sick on the last tour. I’m sure we were all trading diseases from sharing microphones. I bought yer typical Shure SM58, because that’s what I could find quickly on craigslist. I’m hoping to up that to a Beta 58, which apparently has a bigger magnet inside, or something, so it captures more high end and clarity. I think. I’m an idjit when it comes to microphone knowledge, but I’m trying to learn. I’ve had more than a couple sound guys tell me to get a Beta 58 for my low, rumbly vocals to help ’em pop in the mix. In the meantime, the SM58 it is cat approved. 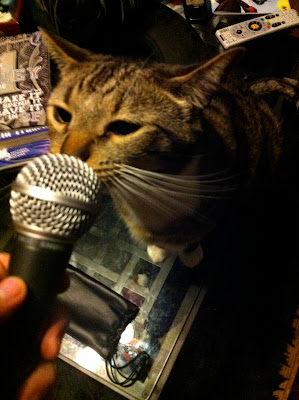 We stopped by my dear friend’s house, Meliora Angst, and she fed us some much appreciated pasta and veggies. Alas, we had to leave quickly and drive all night to the next show. I fucking hate night drives. Even if I’m not driving them, it’s not real sleep. Still, Mr. Dan Randall stepped up and did almost the whole drive till sunrise himself and got us safely to Boston. From there, we unsafely had to deal with Boston drivers. You are all assholes there. Seriously, learn to drive.

We ended up at Great Scott. The stage was a bit tiny, so we had to switch up some of the elements of our show a bit. Someone asked me on Twitter how we’d fit a robot on stage; the answer was we couldn’t.

I don’t think anyone minded, though, as the show packed in and was amazing. Razor Maze and Ramming Speed are never again allowed to play with us, because they shredded us new assholes. How can we compete with these fucking amazing young bands? Answer: break their fucking fingers. Look out, boys.

Occultist had a great set, and we again, too. Blood flew, feet flew, and there was lots of jokes at the expense of a little regarded ban on moshing and Boston culture in general. Everyone seemed to take in stride and we had a great time at a great bar. I also got to eat again at nearby Spike’s, my favorite hot dog restaurant in the world. Amazing buns, veggie dogs, and fried onions on top of scallions on top of green onions. I’m sure my breath was regal to anyone around me. 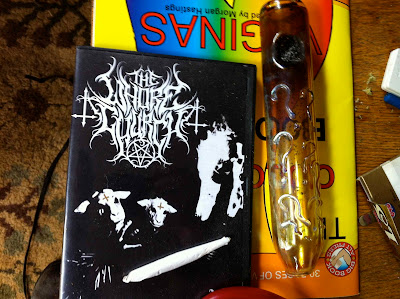 Hip, hip Brooklyn was up next on our headlining tour. We were booked at St. Vitus, a relatively new club (one year old) with a definite bent for things dark and metal, judging by the decor. We were happy to finally work with bookers in Cat Bomb who’d been after us for awhile to play.
We had to build a backstage out of curtains on the stage, which worked out quite well. We were able to do our full show for this crowd of ironic-mustache, fixed-gear bike-having m’fers (I love you all). The show was opened by Pizza Hi-Five, followed by Occultist, and then a ripping set by Spain’s grinders, Nashgul. We had a fucking amazing time, the crowd erupting into total chaos. Lots of old friends came out much to our hearts’ delights.
We left Brooklyn that night to stay at the house of Dino’s cousin in New Jersey with an entourage of MDF bound folks in tow. We stayed in their delightful house and were well fed in comfort. Some of us went swimming on the beach and refreshed. It was almost like a day off and it was a little sad to leave. But Philly awaited!
We arrived in the Philly ‘hood of Fishtown at the Kung-Fu Necktie Bar. It was under the elevated train in one of the more squalid places I have ever been. I can see by the bikes riding around that gentrification is trying to get its mean mug in there, along with warehouse art galleries and restaurants opening with food too expensive for the local populace. It’s gonna be a long fight, though. This place is rough.
Kung-Fu Necktie was great, despite my negative comments about Fishtown (and their ire on Twitter). It was a three band bill this night, and Casket opened the show ripping it with some awesome Swedish-style death punk. Occultist ripped it in the super-hot bar. Our robot couldn’t make it on stage again, but the egotistical shit walked around for awhile outside to show off for all the good folk. 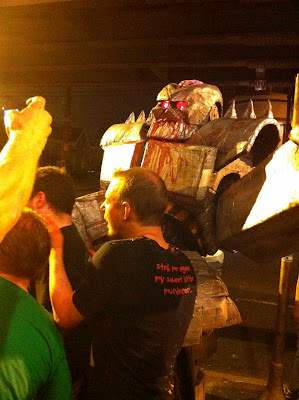 For me, the night was a bit of a fuck balls experience. Apparently, my cabinet blew a speaker. I found out, because it blew my amp up. NOOOOO!!! That’s my beloved Ampeg V4B! I checked the exterior fuse, and it was not blown. Oh shit, this could be anything. In the meantime, I tried Occultist’s amp. A Sunn Beta Lead, it had some gnarly squeal to it. Then Casket lent me their bass rig. It was a Peavey 300 series, and actually sounded pretty awesome for a Peavey.
The set ruled, but I was stressed about my head. We went to our friend Mo’s place in West Philly, and instead of bringing in sleeping bag or luggage, I brought in my amp. After getting into it, it (very luckily) turned out that the interior 10A fuse had blown. That means that all the safety design in the amplifier from the ’70s worked! All parts were saved and I could just solder-in a new fuse. 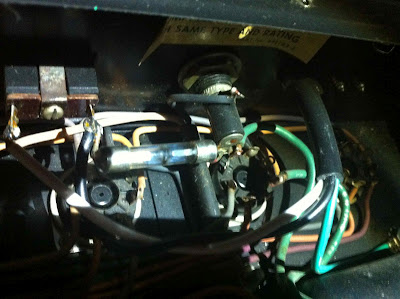 Solder in? Yeah, it’s almost like the designer forgot to add this part until the last moment. Instead of a normal fuse box, it sits suspended by two wires. Whatev, it saved my amp.
Onto Maryland Death Fest! We left early in the morning with our friend Ben from Woe along for the ride. We were the first band to arrive. Good. We had a lot of work to do to make our appearance at this MDF the best we’d ever done. It was the first time we’d ever been able to tour here and bring along our full stage show.
We got all our props and gear staged, snaked the best merch spot ever, and didn’t stop running around until hours after we’d finished playing. And what a show… the crowd has always been kind to us at MDF, but this year it was AMAZING!!!!! Total fucking chaos. We had more blood than ever, amped up the show beyond even what we’d managed with GWAR, and laid waste. It was a delight to see so many folks walking around all night (as we played in the early eve) covered in blood for the rest of the night! 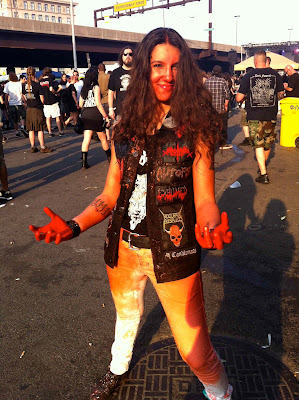 And then… fuck off! I’m done writing and it’s time for a metal vacation (all I ever needed). More drinking, more boozing, and lotsa hugs with old friends all weekend at MDF. It’s the ten year anniversary and we’re here for all of it! Hells fuck yeah, congrats to Ryan and Evan, masters of it all. I’ll write more about whatever I can possibly remember next week. BLACK OUT!!!!
Doktor Sewage

Doktor Ross Sewage · 18 hours ago
@sewage666
thinking bout how lou reed, prince, and david bowie put out shit records to get out of their recording contracts and impaled was like “here’s the best thing we’re ever going to do” and handed it over to fulfill our contract with necropolis 🤦‍♀️
View on Twitter
2
107
Doktor Ross Sewage · 19 hours ago
@sewage666
good morning, boston https://t.co/YAQnxU09yx
View on Twitter