Chaos in Tejas is aptly named. I enjoyed a Saturday of watching loads of punk rock, but missed much more because of bands canceling, schedules changing, and sometimes just because the heat made me lazy. Saturday’s best band had to be Anti-Sect, who blazed through their set at Mohawk like seasoned pros. On Sunday, we prepped for our second show at the fest. My armbands were now an impressive showcase of summer fun.

we’d done back in January. I also had to grab extra cabs from our space to relieve Toxic Holocaust from back line duty. 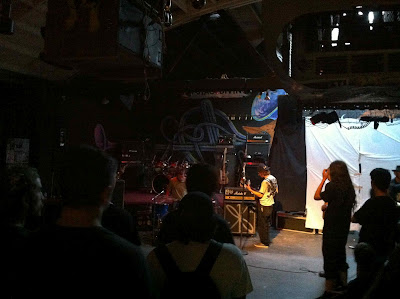 The show was a Tankcrimes endeavor, starting early with Fucktard and then Theories. Ex-Toxic Narcotic members went all wicked hardcore for their Bostonian-driven set as Opposition Rising. This night was also graced with punk rock from Japan (as they reminded us often) as Forward made their mark. Then Toxic Holocaust got the circle pit raging for their first appearance at our little local landmark.
Finally, we were up. As I was getting ready, I remembered my wireless had run out of batteries. A wireless guitar set up is a funny thing to be worrying about at a punk club, but such is the way our theatrics have grown. We need a floor free of wires. I ran to the liquor store down the street and was set up again lickity split. The main reason I mention this is that while running, almost all of my keys slipped off the carabiner attached to my belt loop. What the fuck? I lost all my keys except… the completely irreplaceable trailer keys that only I had a copy of. Phew! This was all discovered later, mind, but a hurtful reminder I should have spare batteries in my case.
I thought San Diego was a battle… they can’t compare to those animals in Berkeley! It was invigorating as much as it was frustrating. Stage divers all night (on a stage that says “no stagediving”), mics getting smashed, monsters getting punched, blood going everywhere… it was completely insane. Well, I did what I could to discourage the lunacy during two songs where we have characters on stage that are apt to fall over, but it was no use. These numbskulls couldn’t be reasoned with. 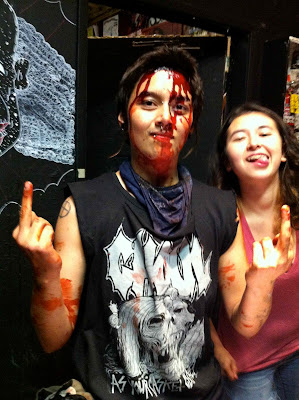 By the end of the set, I was pulling kids on stage and did my own flip out into the crowd while feedback wailed. Fuck it, baby, that’s rock ‘n’ roll, and we were finally home. Thanks to all those who put us up, put us out, and put us on. We’ve got a few more shows coming up through the year, but it’s time for a break. Nothing can compare to this tear of touring and traveling we’ve been on. The ups, the downs, the fun, the tragedy, the nonsense… it’s absolutely mind-blowing, the amount of love we’ve received and the kinship we’ve shared.
What else is there? Live for metal, die for… nah.
Just live for metal. And bang on.

One thought on “Ghoulection 2012: Transmission Ten”