Musical instruments, good ones, are often compared to one’s children. Well, how many children are thrown in a case, plucked, hammered on, plugged into, or hanged? Don’t answer that. (Please, really, don’t.) Without these precious musical items, though, it’s hard to call oneself a musician. That is, lest ye fortunate to have the talent of Susan Boyle (hopefully not the face). My favorite, my child, my baby, my fifth limb… my B.C. Rich Ironbird. This thing is a mother fucker.

It’s an American made (or at least assembled, I dunno) classic, with the big “R” inlay on the headstock indicating its origin in the land of the free. Birthed sometime around THIRTY FUCKING YEARS AGO, it’s got neck-through construction, a rosewood fretboard, and a simple one-knob configuration. Because metal don’t need a fucking tone knob. I scored it over a decade ago at a used-music shop in San Jose for a meager $300, during a period where “metal” was a dirty word and Prodigy was the band of the future (where are they know?). It’s been with me on countless tours and tons of recordings.

Imagine my heartbreak when the neck broke.

Broke might be a strong word… fractured is a bit more accurate. Let’s go back a few years…

In the autumn of 2005, Ludicra played in Phoenix, Arizona. It was the first time I’d seen a particular ex-girlfriend since she’d left me for a dude in a band from there. But my buddy Jack Daniels was there for me. After drinking half a handle or so, I was much happier in my cups. I played a drunken set that to me sounded like it had transcended Stravinsky at the Théâtre des Champs-Élysées. It was similar in that my performance almost caused a mini-riot. Following that last note, drummer Aesop and I exchanged words and almost came to blows, r.e. my shit-faced-ness. I took off my bass preparing to fight (i.e. have my ass handed to me) and hurled it 15-20 feet across the stage. Oi vey…

My bass survived, but I’m certain that was the moment I caused the hairline fracture that would blossom in seven more years of abuse into a full-on split. Last summer, after Ghoul returned from a veritable fuck-ton of touring, I went to re-string my bass and found the split.

Not good. It wasn’t a full on break, yet, but it was going to be. In utter grief, I posted this picture online bemoaning the situation. That’s when my friend Rachel stepped up and offered her healing hand in the fight for saving pointy-pointy guitars from extinction. I felt the clouds open up and the singing of angels. And why not? Rachel has a pedigree in luthiery. She even built her own beauty of a bass. Check out the gorgeous head, the details on the neck, and the great curves on the body.

Rachel invited me over to the Roomian family workshop for an intensive two-day healing process to save my Ironbird. I was introduced to her dad, Doug, who runs Noe Valley Music store. He is also the master luthier / head honcho of Roomian Instruments, a custom instrument and repair shop. While I’m sure Doug is affable and helpful to all his clients, I’m extra thankful to have shared some pizza and a beer with the gent while hearing some colorful stories about the San Francisco music scene of the 1960s.

Doug took a look at what I thought was a catastrophe and allayed my fears greatly. “Oh, that’s not so bad,” he said, after twisting the neck around like Liam Neeson giving his daughter’s kidnapper a stern talking to. I winced. I was afraid that we’d have to break the whole thing off and re-bolt it, permanently changing the sound. Hallelujah, Doug assured me this was going to be a simple glue job and make a stronger bond than the original wood fibers.

I had to take the truss rod cover off the head stock and loosen the rod to take pressure off the neck. We’d need it to be looser in order for the glue-bond to take hold of the wood in its natural state of relaxation. 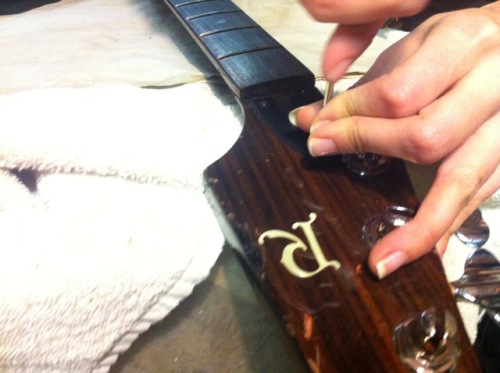 Glue was applied into the crack. Lots of glue. Doug uses Titebond-2 Premium Wood Glue, as does everyone else from what I can tell. To really get it in there, I held the body of the bass while he twisted the neck around and applied more glue into the crack. He also used a common air-compressor blow gun to really push that shit in while we spread the fracture apart. 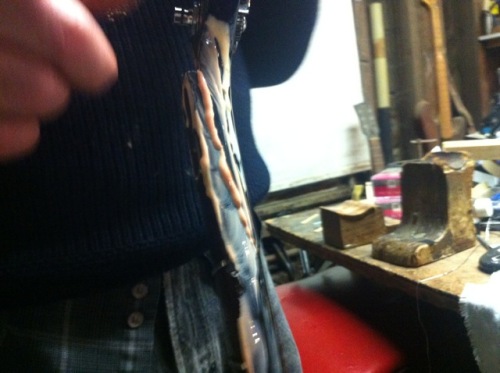 Once we were confident the glue had penetrated the wood thoroughly, we gave the neck a wipe down with a wet sponge to clean up the glooze. It was clamped down (hard) in between a grooved-out piece of wood along the bottom and a thick piece of plexiglass over the fretboard. 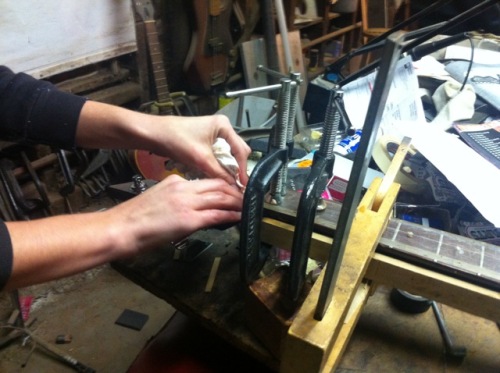 After so many fucking years of spewing blood all over my bass in our traveling grand guignol, my wounded Ironbird was actually bleeding. That was a fun thing to explain to Doug, as it bled out all over his workbench. 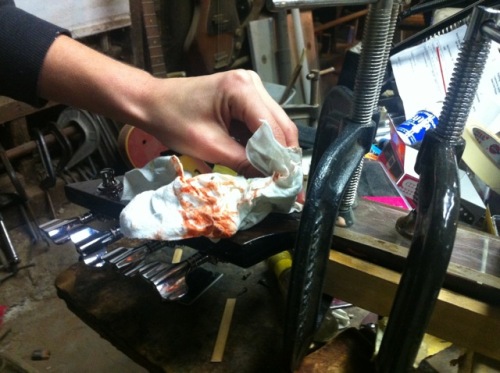 And that was it for the night. We had to wait around 24 hours for the glue to set.

Fast forward to the next day, and my Ironbird is whole again. Doug had me clean the fret board down with 000 steel wool pads. I also used these to clean up any traces of glue, as the 000 pads are fine enough that they don’t kill the gloss of the paint job when gently applied. 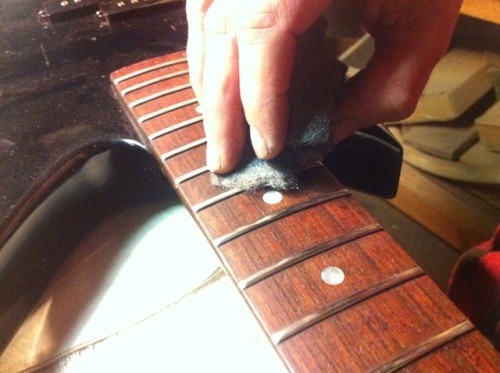 The neck healed nicely. Other than the chipped paint, it’s hardly noticeable. 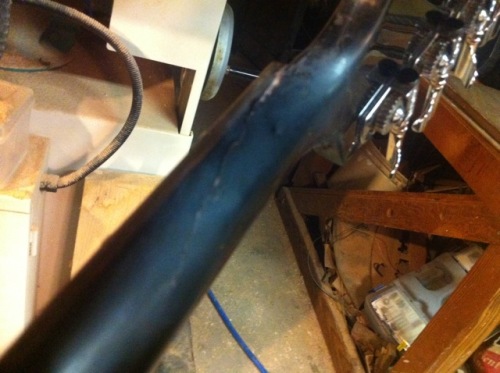 I took one more step on my own. The paint was cracked and made for a rough edge. I wasn’t about to strip and repaint the whole Ironbird. Instead, I’ve found that nail polish is great for patching up paint jobs on guitars. Luckily, all my shit is colored evil (black, black, black, black number one…) so it’s easy for me to find a matching enamel. Carefully filled in, the nail polish will blend with the paint. A little spill, and some super high grit, wet sandpaper followed by some 000 steel wool will smooth things out. It’s noticeable on close inspection, but it feels a lot better and helps protect the wood. 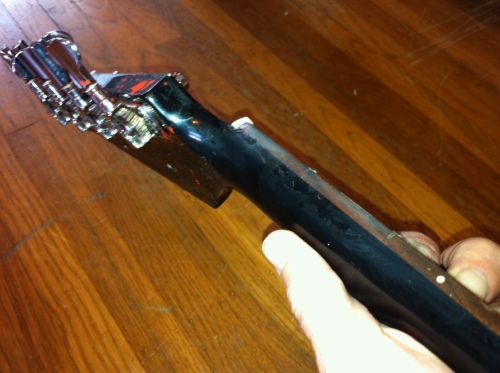 DONE! And it only took a few days. Lots of thanks for their invaluable help go to Rachel and her super cool pops, Doug of Roomian Instruments and Noe Valley Music. Check out the store if yer in San Francisco… and check out my Ironbird once again blasting out the tunes.

The Ironbird is one of the most metal designs ever metalled in metal. Finding an Ironbird bass now, let alone an great playing American-made one like mine, is rare. I was lucky it was salvageable. I asked Jo Bench if I could take a photo of her with her Ironbird, and she asked me why. I said, “Cause you play a fucking Ironbird and I play an Ironbird… and that’s fucking awesome!” She replied, “Yeah, they’re like fookin’ gold now, ain’t they?”

4 thoughts on “From the Ashes… B.C. Rich Ironbird” 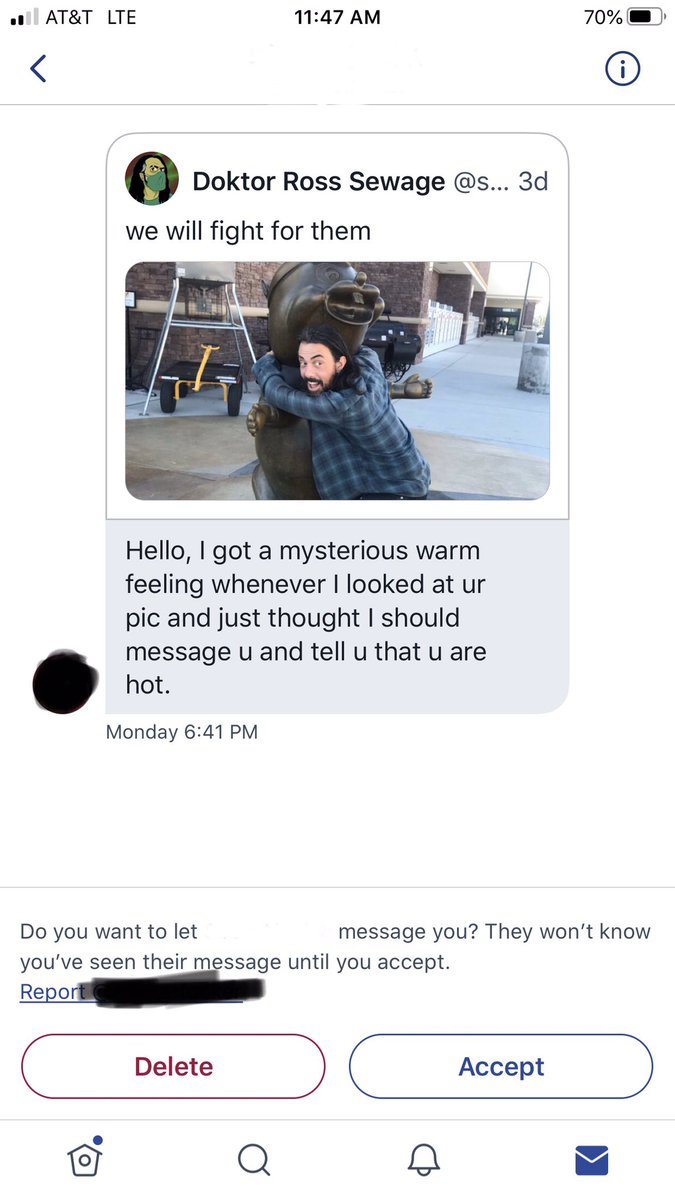